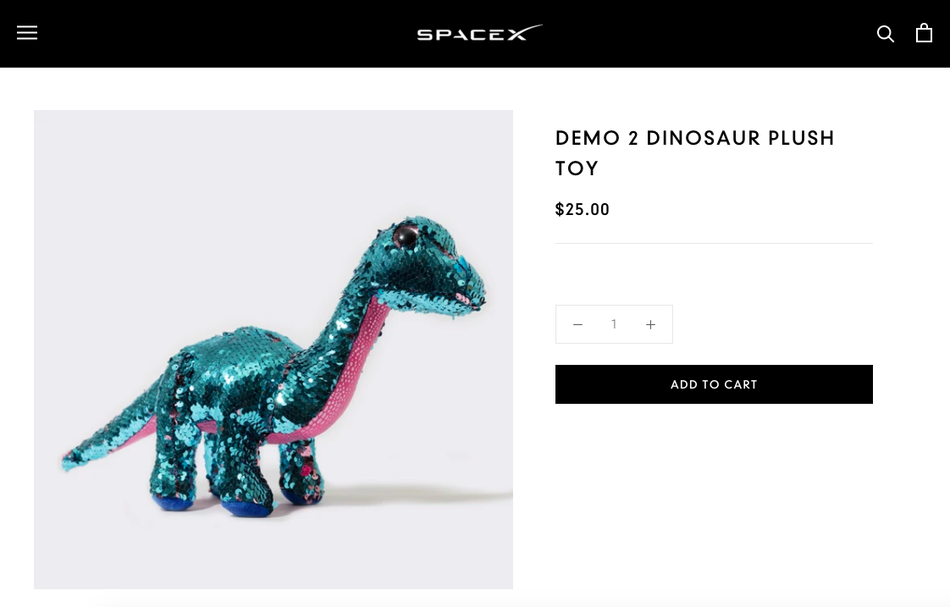 On Saturday afternoon, NASA launched astronauts into space aboard the Crew Dragon, a spacecraft built by Elon Musk’s company, SpaceX. The two NASA astronauts who launched into orbit were Robert Behnken and Douglas Hurley, but they didn’t embark on their historic journey alone. They brought a sparkly stuffed dinosaur to keep them company.

Now, the two astronauts are cool as hell, obviously. But in some ways, this little stuffed pal was the star of the launch. The light bouncing off the dino’s sequins really caught the camera, and when the spaceship reached zero gravity he slid out of his seatbelt and gracefully floated up towards the lens.

To anyone wishing they could buy their very own replica of the stuffed dino that went into space, we have good news: You can!

SpaceX is, of course, selling sparkly Demo 2 Dinosaur Plush Toys for $25.00. But before you purchase one from there you might be interested to know that the SpaceX toy looks exactly — we’re talking exactly — like a retired Beanie Baby. And you might be able to buy that one for less money.

As The Verge noted, geophysicist Mika McKinnon identified the dino on Twitter earlier in the week, the day the mission would have originally launched if not for bad weather. It’s called Tremor Dinosaur, and it’s from the TY Flippables collection, which makes perfect sense because its sequins flip from blue to pink.

If so, it’s a retired plushie that is no longer manufactured, so you can only acquire it on the resale market. pic.twitter.com/k51gJfHbP2

Though you may no longer be able to acquire a Tremor Dinosaur plush from TY Inc., Joann Fabric and Learning Express stores appear to be selling them for only $9.99. (Michael’s and Barnes & Noble also have some plushes available for purchase in select stores, but they seem to be sold out online.)

The toys also appear to be sold out on Amazon and Walmart, and snagging one on eBay seems like a bit of a stretch. (At one point the plush was selling on the site for $36.95. LOL.)

A few lucky people out there don’t have to buy the plush dinos because they realized they already had family members of the space dino at home.

Though the idea of a stuffed animal accompanying astronauts might seem hilarious and odd for anyone new to launches, stuffed animals have been flying to space for years and they’re not just on board to look cute. The plush toys can serve an important role in the flight, as they help indicate when the spacecraft has reached zero gravity and astronauts are experiencing weightlessness.

An Earth-shaped plush flew aboard the test flight of Crew Dragon in March 2019, and SpaceX CEO Elon Musk tweeted a photo. And in a 2016 article, Mashable noted several other times when plushes accompanied astronauts.

Behnken, Hurley, and Tremor the plush dinosaur are expected to reach the International Space Station (ISS) on Sunday. We eagerly await updates.