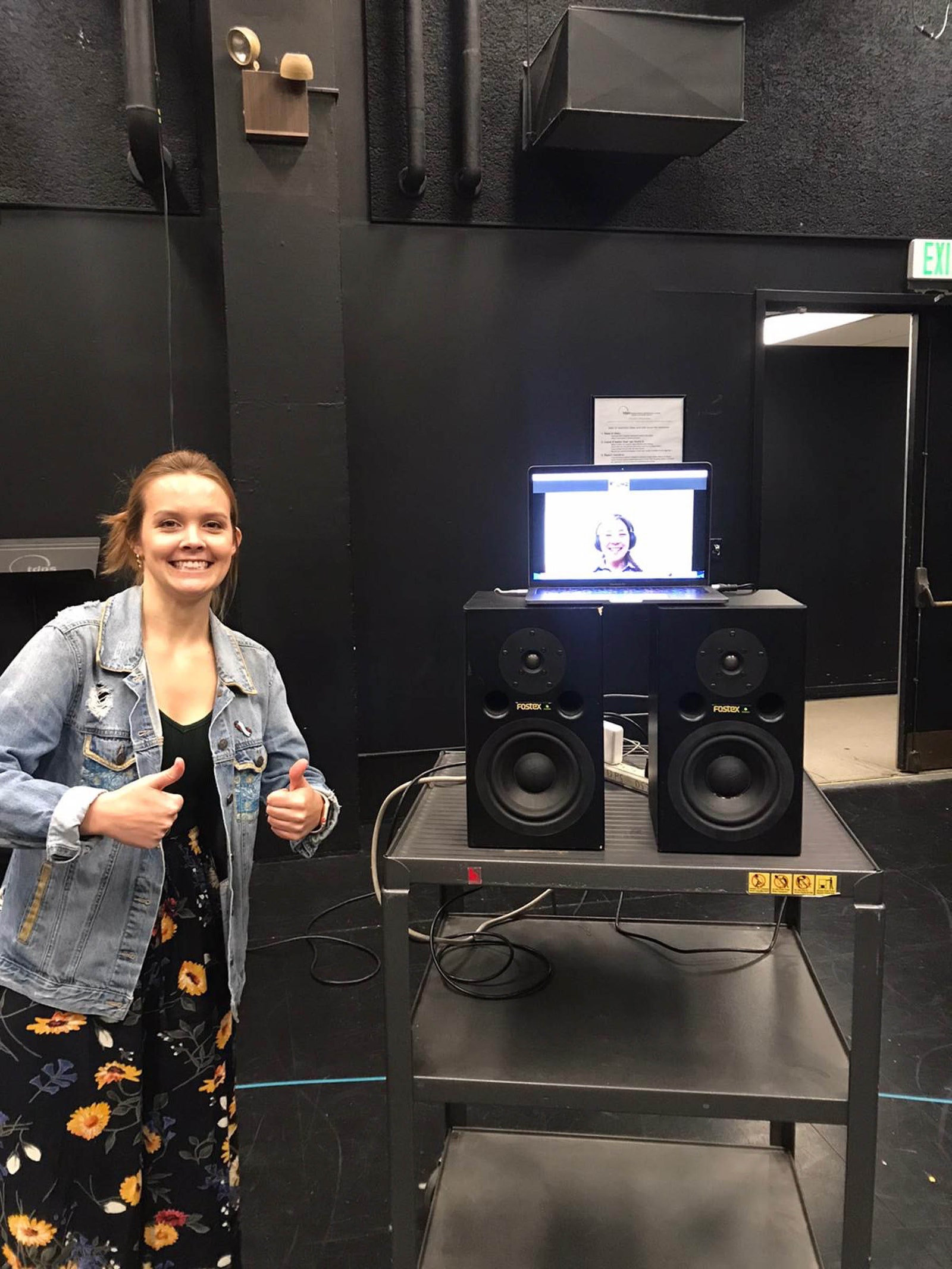 Morita ultimately decided Snowflakes could be just a bit bigger than a traditional radio play. By uploading the final cut to Vimeo, the audio could be accompanied by 10 3D renderings of futuristic, would-be sets from the scenic designer, Tanya Orellana, that seemed equally inspired by Tron, Pedro Almodovar, and, as she noted in one rehearsal, Norma Merrick Sklarek, the first black female licensed architect in America. Embedded within, almost as if in a pop-up book, were the actors themselves, their headshots Photoshopped above realistic sketches from Wendy Sparks, the costume designer.

On opening night, May 1, the crowd started to gather on Zoom. Laura Hay, who plays Meghan, was on a couch flanked by two jumbo-sized Russell Terriers and her parents, her father dressed up in a Windsored tie. Sienna Bruinsma sat in a lounge chair as her newfound quarantine family stood behind her. Wil Legett, UC Berkeley theater department’s production manager, set his virtual background to an empty cabaret theater. Thirty-seven screens soon filled the room: the cast, faculty, and invited guests. It wasn’t a 500-seat sellout, but nerves, anticipation, and relief were palpable in their eager eyes. At 7:08—”a true theater start time,” Legett quipped—Morita, wearing a glittering gold dress from her home office, asked everyone join her countdown from 10. At zero, they went to Vimeo on their own browsers and pressed play.

A violin swirled, a crowd murmured, and a set appeared: silhouettes of a crowd in the foreground, a cherry red backdrop and pineapple yellow curtain, with a bronze sign above reading, “WHEN WHITE PEOPLE RULED THE EARTH.”

Although everyone muted their microphones, most kept their videos on, offering the cast the rare opportunity to watch a playwright react to what they made of his creation in real-time. Chinn sat on his couch in a button-up and blazer and frequently doubled over laughing—when Meghan says, “The only classical music I fuck with is Beyonce”; when Benedict brought maximalist whiteness to the line, “To live our best lives we have to feel all the feels. And you can only feel all the feels when you do all the things.” They could also see a castmember’s relative fall asleep on the couch. It wasn’t as rollicking as playing to a packed house. But they had found the funny throughout. It was bittersweet, a near-tangible vision of what would have been. It was also something new entirely.

Eighty-six minutes later, the credits rolled and the grid filled with silent applause, staggered because some had trouble buffering the play. Mikee Loria, who plays a gift shop employee who lets Meghan and Benedict escape the museum, received a bouquet of roses from his sister. Morita read a quote from Louise Bourgeois: “Art is restoration. The idea is to repair the damages that are inflicted in life, to make something that is fragmented—which is what fear and anxiety do to a person—into something whole.”