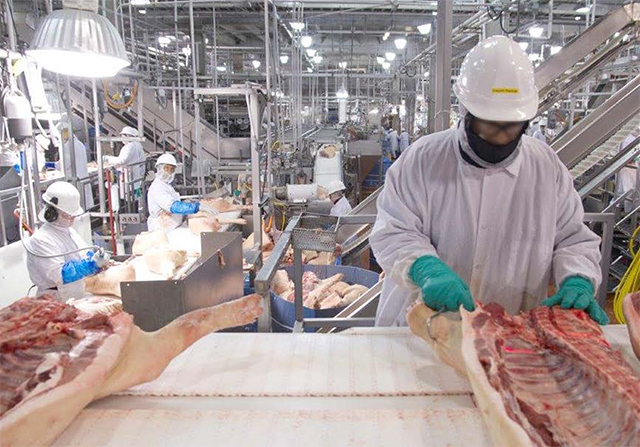 Though the covid-19 pandemic has affected all walks of life, it’s hit some people in the U.S. much harder than others. That especially includes those working in the meatpacking and processing industry, with factories becoming the epicenters of massive outbreaks across the U.S. But these outbreaks are only the latest sign of a government that has abandoned its most vulnerable people to a preventable natural disaster.

According to a report published by the Centers for Disease Control and Prevention this month, at least 4,900 cases of covid-19 involving meat workers in 115 plants across 19 states have been reported, along with 20 deaths—both numbers an underestimate of the problem. Investigative Midwest has tracked 11,500 cases and 49 deaths linked to U.S. meatpacking factories as of May 8.

Some of the risk factors highlighted in the CDC report are obvious. Factory employees often have to spend long hours working close together. Like so many people employed in work that’s been deemed essential, they’ve also been forced or encouraged to risk their health to make a living. Some companies have implemented bonuses for people who keep working, even after employees at a plant have tested positive for the virus that causes covid-19. Given the already meager pay that most of these workers make (around $30,000 a year or less for the average slaughterer and meat cutter, according to the U.S. Bureau of Labor Statistics), it’s an incentive that’s hard to pass up.

These hurdles to staying healthy are nothing new for people working low-income jobs that barely keep them afloat. But the unique conditions of factory life may be exacerbating covid-19’s spread even further. As Wired has reported, some scientists are now studying whether the ventilation and often cold temperatures in these factories are allowing viral particles from a infected person’s breath or sneeze to linger in the air for much longer than usual, as well as beyond the 6 feet of distance recommended by experts as a buffer against transmission.

Many employees in the meatpacking or farming industry also live in larger, crowded households and rely on public transit or carpools to get to work, often to save money. And the fact that many workers are undocumented or live with undocumented family members might further discourage them from visiting a doctor or reporting their illness to the factory, lest their status be revealed. Being undocumented, they and their families have had little access to the small bits of financial relief provided by the federal and state governments, including the $1,200 stimulus check.

This isn’t strictly a U.S. problem. Factory-related outbreaks of covid-19 have been reported in multiple countries. In Alberta, Canada, for instance, a single plant owned by the Cargill company has been linked to over 1,500 cases, in what might be the single largest outbreak reported in North America. The relative lack of worker protections in the U.S. compared to other developed nations, however, is sure to deepen the harm caused by the virus. And some countries that have been able to weather covid-19 far better than the U.S., such as Germany, have also appeared to avoid large factory-related outbreaks and covid-19 related shutdown.

“Companies such as Tyson Foods,” whose plants have seen hundreds of covid-19 cases, “need to rethink the inhumane working conditions and expectations on production,” Magaly Licolli, the co-founder of Venceremos, a poultry workers’ rights organization in Arkansas, told Gizmodo. “They need to prioritize workers’ health and safety, because as essential workers, who is going to produce the food we consume everyday if they keep getting sick and die? We know production will be reduced, but that’s how they could truly show they value workers over profits, instead of continuing sacrificing workers for the sake of the bottom line.”

Faced with outbreaks that have shut down their factories, companies like Tyson Foods have pledged to do more to keep workers safe as plants re-open. Some have instituted paid sick leave for anyone with covid-19—a universal right in similarly wealthy countries—while others have graciously promised not to penalize workers for taking unpaid sick leave. Tyson and other companies also are providing temperature screenings to workers before they enter the factory, as well as protective equipment or barriers between workers on the assembly line.

But these efforts are either ineffective, optional, or haven’t actually been carried out with any real urgency, as workers are still complaining about a lack of protection. Yhe frantic nature of meat processing also fundamentally conflicts with keeping the people who make it as safe as possible. The industry as a whole produces hundreds of million pounds of red meat every week in the U.S., according to the USDA, and consumer demand is only climbing. Ensuring that workers stay 6 feet apart from each other will slow down factory lines, and many companies as well as the federal government are not likely to accept that turndown in efficiency for long.

Late last month, President Trump ordered factories to stay open, while the Occupational Safety and Health Administration announced it would not enforce safety guidelines in meat factories related to covid-19, so long as the companies running them made a nondescript “good faith” effort to keep workers safe. It also signaled that the Department of Labor would intervene on behalf of those same companies if workers attempted to sue over being exposed them to the virus. Just this week, Health and Human Secretary Alex Azar appeared to blame the workers themselves for catching the highly contagious virus during a meeting with Congress members, while defending the factories’ working conditions.

A germ doesn’t pick sides, but the U.S. certainly has, and it hasn’t chosen to support the vulnerable people who prepare the food that keeps the rest of us alive.