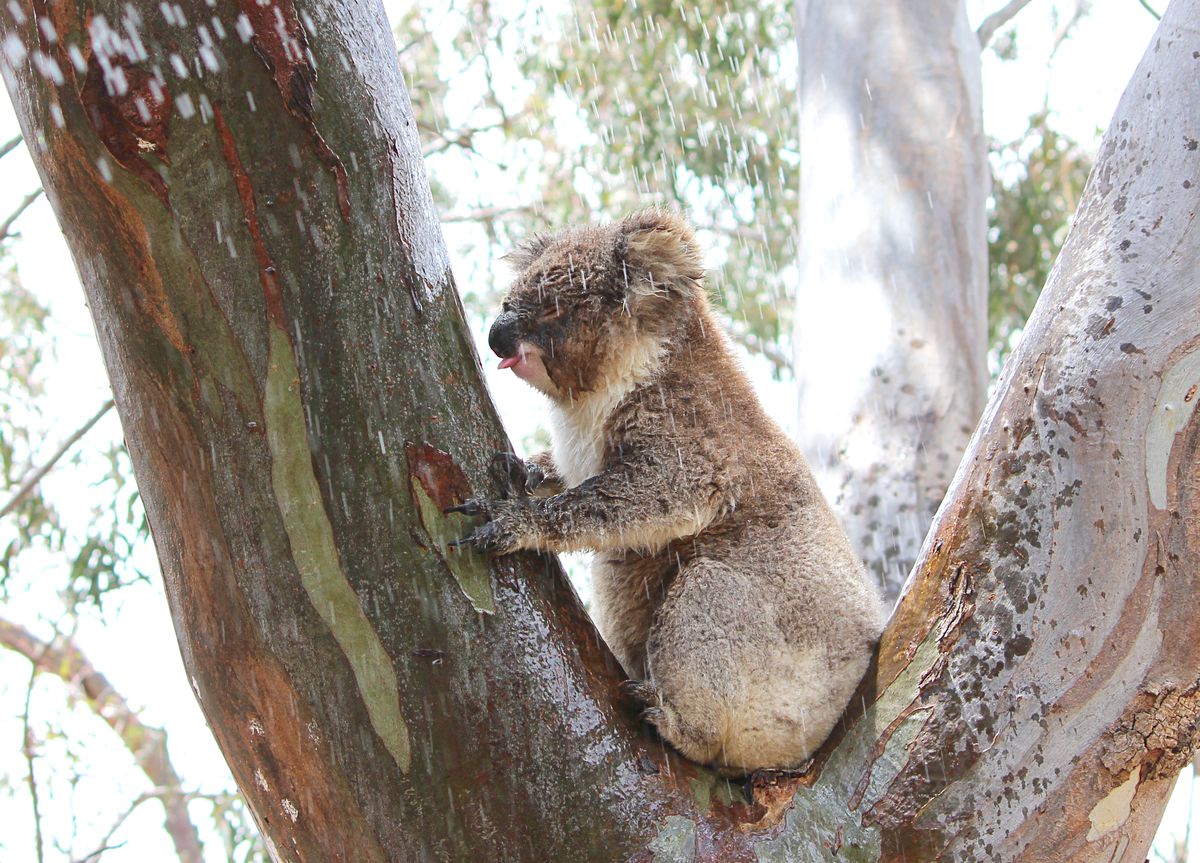 Koalas lick tree trunks to quench their thirst when it rains, scientists just learned. It upends what biologists long thought about koalas: that they get almost all the water they need from the eucalyptus leaves they eat.

But koalas probably lap up water like many animals — except they do so from trees, according to the findings published today in the journal Ethology. With fires, heat waves, and droughts putting more and more stress on the critters, scientists have been paying close attention to how koalas are keeping hydrated.

“This significantly alters our understanding of how koalas gain water in the wild. It is very exciting,” lead author of the Ethology paper and University of Sydney researcher Valentina Mella said in a statement.

The surprising discovery was made by enlisting the help of citizen scientists and independent ecologists who had observed the koalas’ behavior in the wild between 2006 and 2019. One koala was caught lapping up rainwater for more than 30 minutes, at “a steady pace” of two licks per second. Altogether, they documented 46 instances of koalas drinking in trees during and after it rained. Koalas were recorded drinking every time observations were made in the rain. One of the reasons why scientists hadn’t noticed this before is because people are less likely to go out and look for them in bad weather, according to Mella. The marsupials seem to prefer smooth parts of the trees where it’s easier to collect the trickling water.

Koalas are considered vulnerable by the International Union for Conservation of Nature, which keeps track of endangered species. They were devastated by massive bushfires that swept through Australia late last year. Nearly a third of all koalas were thought to have been wiped out in the state of New South Wales, which was the hardest hit by the fires.

The same hot and dry conditions that fueled the flames left koalas parched. Photos and videos of koalas approaching people to drink went viral as the wildfires raged throughout Australia last year.

Even before the latest fires, Mella’s previous research found that climate change was leaving koalas thirsty. In 2017, koalas were caught on camera standing up to drink at artificial water stations set up by researchers — a very unusual behavior for animals that spend most of their lives in eucalyptus trees.

At the time, Mella and her colleagues thought the behavior was because hotter temperatures and changing rainfall patterns were drying up the leaves that koalas eat. Now, she and her co-authors of the new paper think that less rainfall could be another, more direct factor leaving koalas with less rainwater to lap off of the tree trunks they call home.

Mella is currently raising money to continue her research and set up more drinking stations for koalas. She hopes the drinking stations, which are placed in trees, will give the koalas a safe way to cool down even as the world around them continues to heat up.