This Bizarre Insect Is Building Shelters Out of Microplastic 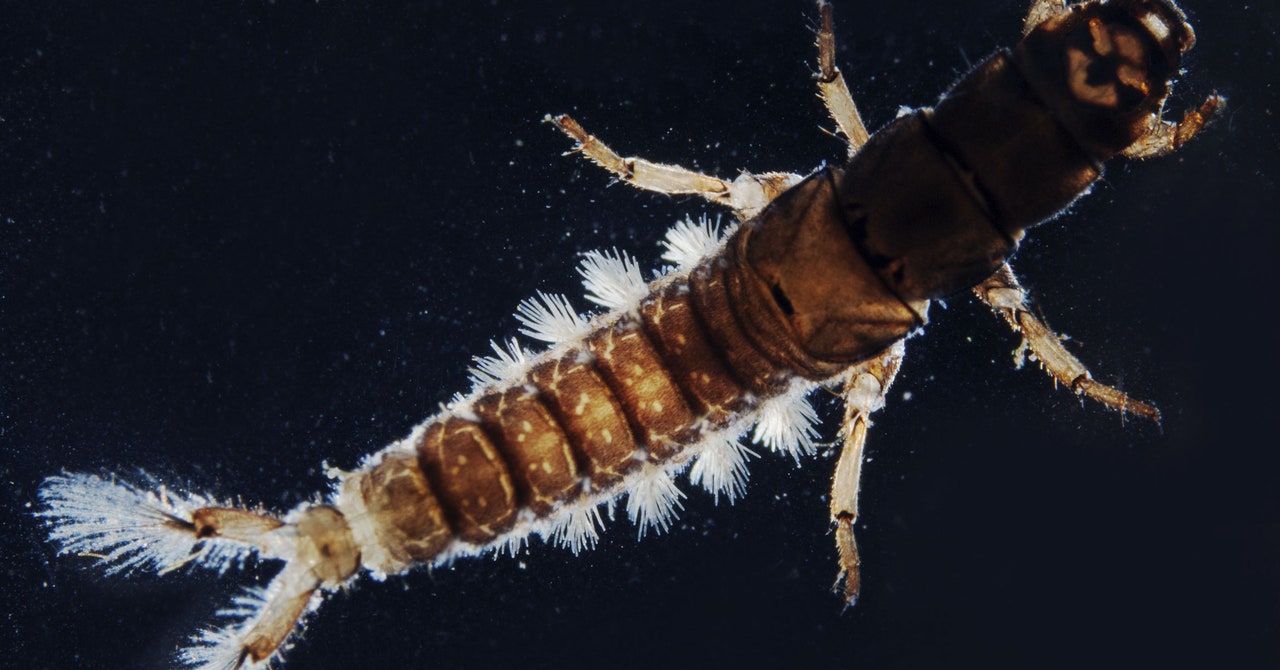 That’s not good, for the obvious reason that the caddis fly larva relies on the structural integrity of its case to protect itself from predatory fish. And it’s potentially not good for more subtle reasons: The case helps camouflage the larva on the river bottom. That may not be a problem if the sediment the case is lying in is also littered with the same microplastics the insect used to build its protective outer layer; it will still blend in. But caddis flies often move around a river ecosystem, so if one ends up in an area less contaminated with microplastics, or even more contaminated with them, its technicolored case could make it stick out. Increased predation could in turn affect the ecosystem as a whole, if the larvae aren’t able to do their work cleaning up vegetation.

Being in such close contact with microplastic could cause physiological problems for the larva, as these materials are known to emit toxins known as leachates. “They also use the case for respiration,” Ehlers says. “They are creating water flow inside the case so the water passes their gills. And so if there’s plastic incorporated, then of course those leachates could also reach the gills maybe and do some harm.”

A more long-term concern, for the caddis fly larvae and any number of other organisms at the base of food chains, is bioaccumulation. A small fish eats a larva, a bigger fish eats the smaller fish, all the way on up, and the concentrations of microplastic and associated toxins accumulate over time. The bigger predators that people eat, like tuna, may be absorbing those microplastics and the chemicals they leach. We still need much, much more research on how microplastic pollution might be affecting different species, but early indications aren’t rosy. Recent research from scientists in the UK, for instance, has shown that hermit crabs exposed to microplastics have trouble choosing new shells.

In addition to teasing out the physiological effects of microplastics on organisms, scientists are only beginning to explore how species like the caddis fly are interacting behaviorally with the stuff, says University of Toronto Scarborough ecologist Scott MacIvor, who wasn’t involved in this new work but has studied how bees are now incorporating plastics into their nests. Given how pervasive microplastic pollution has become, the effects could be extensive.

“It’s very likely that animals are interacting with plastics—which are having negative, neutral, and even in some cases positive impacts to their individual fitness—more often than we realize,” MacIvor says. “We’re just not studying it. We kind of look past the goose sitting on its nest that’s full of plastic straws and string and other anthropogenic materials.”

The pollution problem is only getting worse: According to the consultancy McKinsey, plastic waste may grow from 260 million tons per year in 2016 to 460 million tons by 2030. Even before the pandemic hit, much of what you “recycled” never actually got recycled, and even more is going straight to the landfill now that recycling facilities are shutting down. For a species like the caddis fly, microplastic particles may well be accumulating over time in its environment. Plastic, after all, is designed to be ultra-tough, so instead of degrading entirely in ecosystems, it just breaks into ever-smaller pieces that get into ever-smaller crannies.

The most visible consequences of plastic pollution, like bags in whale stomachs and six-pack rings around birds’ necks, remain a massive problem. Now researchers are digging ever deeper to show how tiny, omnipresent pieces of plastic are affecting animals on the micro level. Sadly for species like the caddis fly, there may be no escaping.