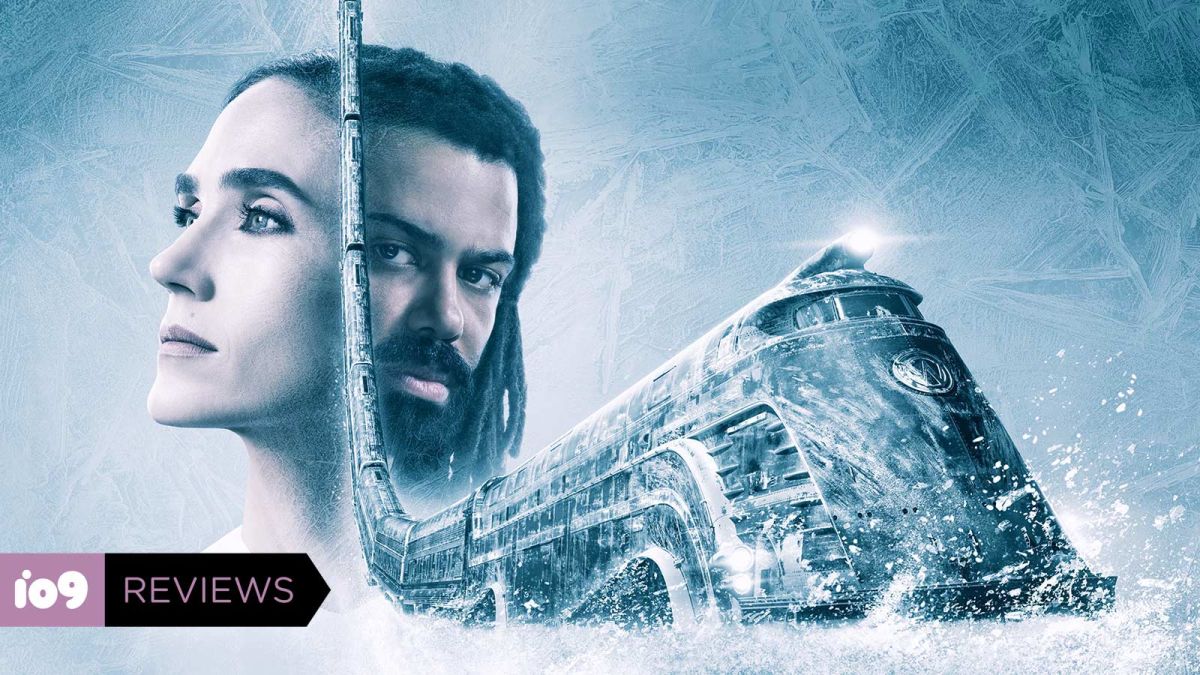 TNT’s adaptation of Snowpiercer chugs along similar narrative tracks as both Bong Joon-ho’s film of the same name and Jacques Lob and Jean-Marc Rochette’s graphic novel Le Transperceneige, which inspired both live-action stories. Within moments of the TV series’ premiere episode, though, you can see that it’s a train speeding in its own distinct direction in order to set itself apart and transport us somewhere slightly different and new.

Set in a world that’s been plunged into an ecological disaster of man’s own making that’s wiped out basically the entire planet’s population, Snowpiercer tells the story of the only living survivors. They all owe their livelihoods to a massive train that endlessly circumnavigates the world as it protects its passengers from the killer freezing temperatures outside.

A curiously animated bit of backstory (that harkens back to the story’s graphic novel roots) kicks off the TNT series by explaining that the seemingly endless winter that killed most everyone was the direct consequence of the world’s governments trying to cool the Earth down after the launch of an all-out war left the atmosphere too hot. But, as is often the case with these stories, things go very wrong. At some point soon after the big cold set in, the extravagantly wealthy planned to embark on the Snowpiercer with the intention of letting everyone else die. Just as the train begins to pull off, it’s swarmed by the desperate poor and working-class people. Having no other choice if they want to live, they forcefully board the train.

Snowpiercer’s central story focuses on Andre Layton (Hamilton’s Daveed Diggs, acting as if he’s in a slightly different show in which everyone’s a spoken word poet), a would-be revolutionary trapped towards Snowpiercer’s backmost cars—known as “the Tail”—where all of the surviving impoverished travelers who weren’t murdered when they boarded the train now live in darkness and filth. They survive on meager rations provided to them by those living in the cars farther up, and Diggs’ character is brought into the train’s larger story as he holds a particular skillset they need.

As Layton and the other Tailies spend their days living in fear of being brutalized by Snowpiercer’s squads of armed guards, the luxurious front cars and its privileged inhabitants are tended to by Melanie Cavill (Jennifer Connelly being equal parts frosty and scarily exacting) and her fellow employees who all work for Wilford Industries, the company that owns the train. Because Melanie is the voice of Snowpiercer’s PA system, every passenger—even the Tailies—know of her in one sense or another. Considering she also works as Wilford’s personal representative who’s privy to sensitive information about who’s aboard, Melanie knows virtually everything about everyone else.

Snowpiercer both does and doesn’t want you to think of the entire scenario as being as simple as it as is, and to its credit, it’s probably neither. The impoverished in the Tail are all freedom fighters and the rich in first-class are blissfully unaware for the most part of the turmoil that everyone else has to live through on a day to day basis.

The idea the series ends up tackling—“Oh, what if rich people were evil?”—isn’t as revolutionary as it would have you think, nor is how it goes out of its way to humanize its white, female characters despite how objectively monstrous they are towards other people. In addition to being impoverished beyond belief, the Tailies are made out to be inhumanly noble, which makes for all right television, but it doesn’t track with what existential subjugation actually makes people act like towards one another. For those reasons, Snowpiercer is more than suspect on its face.

In this way, Snowpiercer feels strangely like an episode of Law and Order: SVU that would make Dick Wolf choke on his drink of choice, but that’s not to say that there’s nothing to enjoy about the show. To be quite clear: Snowpiercer is more often than not that specific kind of nonsense fun that, despite its high drama, lulls you into a comfortable haze. Every time Layton gathers his oratory powers to deliver a speech of conviction to either his fellow Tailies or the people up-train that he ends up having to interact with, it all feels a bit more than contrived because of the way the show brings its players together as if it were the most extra-ass game of Clue you’d ever witnessed.

Beyond its more literal villains, Snowpiercer spends a fair amount of time emphasizing and then reemphasizing just how much class as a concept and then Mr. Wilford, the faceless man in control of the train are enemies to the literal whole of humanity. By way of Wilford’s draconian laws that segregate the car’s classes and encourage outright hostility between them, the wealthy up in first feel free to indulge in their most base, destructive desires that have the potential to threaten the entire train’s existence. While that’s something Melanie and her fellow hospitality managers understood from the jump, it’s something that mutates and becomes that much more insidious as the season progresses.

But because Snowpiercer is set on a train that’s literally just going around more or less the same track whose constructive origins are never explained, there’s only but so many places it can go story-wise. People who’ve spent enough time with crime procedurals will see all of its twists and turns coming from a mile away. The characters, while interesting when you first meet them, very quickly begin to show themselves as being the products of people who grew up watching a lot of television, which is to say that they are as familiar as they are predictable.

The thing to understand about Snowpiercer is that it’s a show on TNT, but it’s also a TNT Show™, which might sound redundant to those who don’t understand the kind blue-sky programming the network is known for. Snowpiercer is peak neat future sci-fi, but there are countless moments that make it seem as if its characters are just going to grab a cup of coffee before hauling in their latest demented perp. If that’s the tone the show’s creative team was going for, it’s an admirable one, but it doesn’t quite land when you begin to pay the closest of attention to the story. But when you take it in as ridiculous fun that’s surprisingly more grounded than its cinematic counterpart, it’s exactly that: some wild train-focused absurdity that’ll bowl you over and very sneakily encourage you to watch the next episode.