TunnelBear review: A VPN for the rest of us 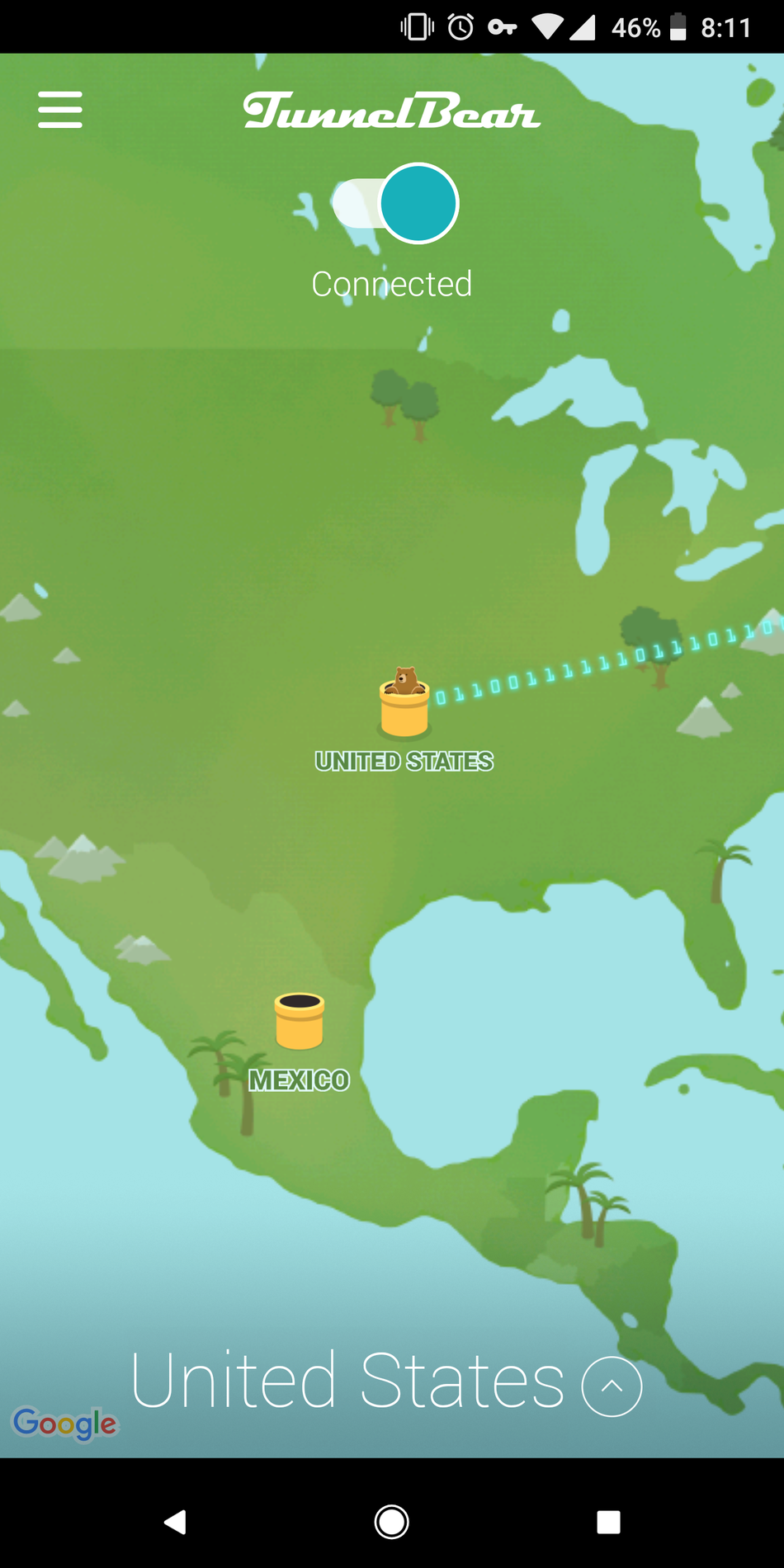 Intuitive design • Seamless integration across multiple devices • Strong security features
Free plan offers a paltry 500MB of data • Download speeds slower than expected • No Netflix
Lightweight and incredibly easy to use, TunnelBear is a great introduction to VPNs, even without Netflix access. But it could be faster.

With privacy an ongoing concern, finding ways to safeguard your data and obscure your web browsing should be easy. Virtual Private Networks (VPN) have a long history among safety-minded internet users. Generally, the trade-off is you need some technical know-how and be able to settle for lower internet speeds for the sake of security, but that’s becoming less true every day.

TunnelBear is just one of many VPN services looking to stake a claim as the VPN for the masses. With an intuitive interface, lightweight design, and relatively fast browsing speeds, TunnelBear is worth your attention.

Bear-ly there design (Ease of use)

Downloading the TunnelBear app for Android was a breeze. A quick registration followed by an email verification and I was ready to hop from tunnel to tunnel.

Whenever you access the internet, you need to do so through an Internet Service Provider (ISP). The thing is, everything you do online is in some way recorded by your ISP, even if that data isn’t readily accessible. By contrast, a VPN masks your internet and activity and IP address by routing it through the VPN provider’s servers rather than your ISP’s.

The app is super responsive and intuitive. A vibrant map greets you with your home tunnel and available tunnels across the world. Your bear serves as a friendly guide to your current VPN location. I may physically be in Brooklyn, but my bear and IP address are in New Jersey. I was told to click on the button and I was now on a VPN.

Free users have a monthly data limit of 500MB. At first that seems fine, maybe even more than enough! However, mindless web surfing can quickly sap you of that precious data. TunnelBear offers a $9.99/month option or a yearly membership for $59.88, which adds up to a 50% discount.

If you want to remain a free user, there are ways to get a gig of data by downloading TunnelBear on your computer, referring a friend, or by tweeting about TunnelBear.

If you never interact with the options found within the TunnelBear app, you’ll still have a great experience, but you’ll be missing out on some great security features.

Within the Android [you can only toggle sound in iOS] app you can toggle sounds, vibrations, or add some fluffy clouds to the map. That last feature is purely cosmetic, but it does add a level of zen to the app. The best features involve a series of bear variants that add additional layers of security.

GhostBear turns encrypted data into something that resembles normal internet data. While[the link works now] this feature is not available on iOS due to design restrictions, GhostBear is generally useful because it makes it harder to figure out if you’re using a VPN. ISPs could use a tool that identifies VPN traffic to throttle speeds and limit its use on its service, according to TunnelBear. The explanation gets pretty technical, but GhostBear is great for countries with restrictive internet laws.

VigilantBear halts all traffic if your connection is disrupted.This helps mask your internet activity in the event the VPN is cut off. But again, it’s only available on MacOS, Windows, and Android — not iOS.

SplitBear lets you select apps that are exempt from TunnelBear. This would be good for any apps that don’t use an internet connection or if you’re trying to save some data by exempting bandwidth-heavy apps. Though, this feature only works on Android devices.

The TunnelBear app was ideal for a first-time VPN experience. I had it on in the background, surfed the web, and never noticed its presence. However, it was a bit of a battery hog if it was working in the background, but you can easily disable background activity to solve that problem.

TunnelBear acts as a proxy for Chrome browsers and ChromeOS. Just download it as an extension, select your server location from a drop-down menu, and you’ll be in business. Same map of bears tunneling from location to location, same level of security.

Ditto for the TunnelBear experience on a MacBook Air. Just download TunnelBear, toggle it on, and start browsing on a VPN. I experienced similar browsing speeds and no quirks across all devices.

The need for speed

A VPN is only as great as its speed, or rather, by how little it slows down your internet experience. Functionality and convenience matter, and it’s important that a new-to-you technology nails that experience. VPNs may still be labeled as a “useful, but not necessary” piece of technology.

My wife, as the personal anecdote that proves a fact, doesn’t quite see the value of using a VPN even though she understands today’s concerns about internet security and privacy. She can see the value, but it’s not a necessity. A lightweight app that does not disrupt her web experience, however, may be the “What’s the harm?” gateway to larger VPN adoption.

So far, I’ve experienced no performance setbacks while using TunnelBear. Sites I frequently visit load as expected. There is, at times, an incredibly minor hitch before a new site loads, but I’ve experienced much longer delays for no apparent reason using a regular browser and WiFi. Overall, it’s a smooth experience.

After enjoying the speed and convenience of the default server, I decided to go international with TunnelBear. The first stop was Canada, or Toronto to be more specific. Again, there may have been a hitch once or twice when first loading a site, but nothing that was incredibly distracting or made browsing a burden.

Going even further, I tunneled to Brazil. Again, the speed was relatively fine for the TunnelBear app. The delay was a little more noticeable on this server, but it was something you could quickly forget once you start browsing.

However, TunnelBear isn’t the fastest VPN around. Running online speed tests for my regular connection compared to a U.S. server and a German server reveal a 20Mbps dip in download and upload speeds. I could stream allowed Netflix content without any real buffering issues, but you may have to pause and allow some time for buffering if your speed drops.

Privacy and security is great and all, but sometimes you just want to watch Netflix while traveling and have access to the same library of content you have at home. However, the streaming service has been actively blocking VPN and proxy activity since 2016 to protect regional licensing agreements.

TunnelBear is affected by this. You’re out of luck if you want to see your home Netflix selection while you’re in another country.

At first I thought I encountered no issues with Netflix across devices. I tested the default server on my Chrome browser and was able to binge U.S. content without an issue. So far, so good.

Tunneling to Germany seemed to pose no problems. Same great Netflix experience, now with a section dedicated to “US TV” and distinctly German titles populating the Action and Comedy sections.

But once I clicked on that foreign content, Netflix stopped my activity and asked to me to turn off my VPN. I was busted. Looks like I won’t do any Netflix and TunnelBear-ing any time soon.

TunnelBear once had a strict no torrenting policy, but that seems to have changed. There are conflicting reports on the internet, but more recent comparisons [took out link — it doesn’t work anymore]x indicate you can torrent while using TunnelBear.

Any VPN can promise private browsing, but there could be leaks that will quickly eliminate that veil of security. Luckily, there is a quick way to ensure nothing is escaping your secure connection. All you have to do is search for a DNS leak test.

A domain network service (DNS) leak occurs when any traffic escapes the secure network. If you visit a website and that site’s request for your IP address is sent to your ISP’s server and not your VPN, you have a DNS leak. A DNS leak is a major security flaw that could reveal your location or what you’re viewing on the web.

Finding a DNS leak test requires a quick Google search. Plug in the term and click on as many tests as you like. If a simple or extended test reveal just one server, you have a secure connection. I tested for DNS leaks and found none. TunnelBear said I was in Toronto and the tests confirmed that.

Turning off the advanced security features on TunnelBear did not lead to leaks. That’s comforting to know that, even if you’re using the vanilla version of TunnelBear, you’ll be secure.

On the privacy side, TunnelBear says it logs a small amount of user data. For example, it does collect email addresses when you register for an account, but it claims to not log the IP address when you initially connect to a server. You can read the full privacy policy to understand what data TunnelBear collects, but know that it’s not enough to identify you or your habits.

A VPN for the rest of us

TunnelBear is a great introduction to VPNs. There were no technical hurdles to prevent you from getting online, and you can use it across multiple devices. It’s what you want from an everyday VPN even if download speeds could be better. If you’re curious about browsing securely, give TunnelBear a shot. You won’t be able to stream your personal Netflix abroad, but you can surf the web with ease and peace of mind. 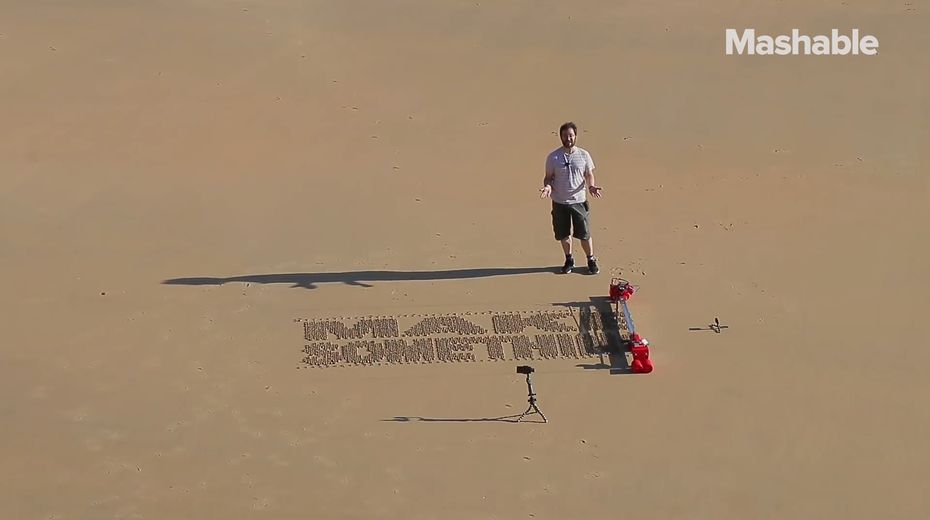