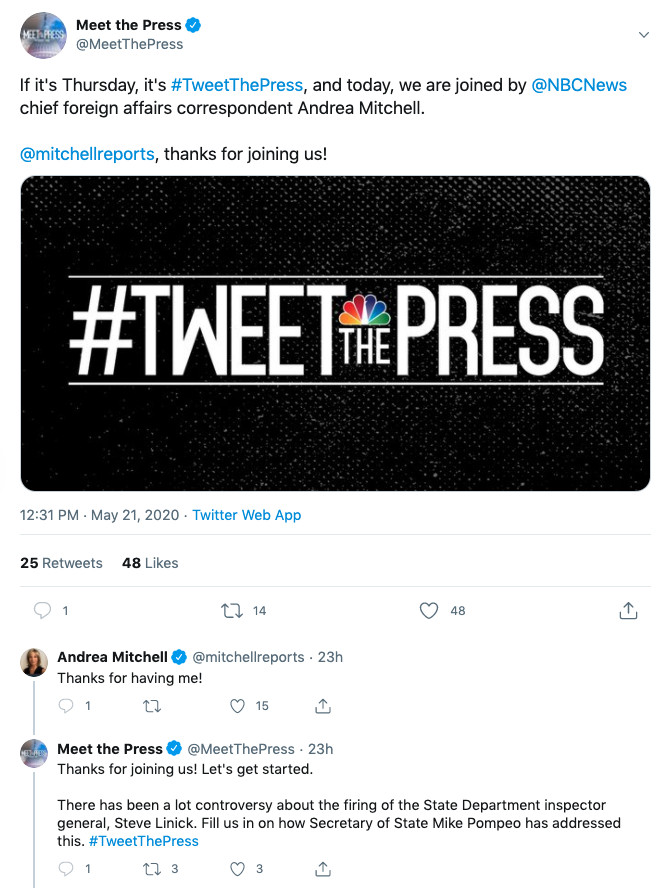 Twitter is testing a new feature that lets users decide who can reply to their tweets, the company announced on Wednesday, and some accounts are already using it in some interesting new ways.

Previously, anybody could reply to anybody on Twitter (as long as their profile wasn’t private or blocked). But now, if you’re part of the test, you can decide if you want to allow replies from everyone, only people you follow, or only people you tag — which, if you don’t tag anyone, means that no one can reply at all. Deciding who can reply to which tweet on a tweet-by-tweet basis could change how some people use the social media platform in significant ways.

Interviews on Twitter, for example, could be much more streamlined, and NBC’s Twitter account for Meet the Press has already shown an example of how. Meet the Press announced an interview with NBC News’ Andrea Mitchell and only allowed people it tagged in the tweet to reply — which, in this case, was only Mitchell. What followed almost felt like a long tweetstorm, split between two accounts.

Limiting how users can interact with live Twitter interviews does mean that emergent conversations won’t occur as easily in the replies — you can theoretically still quote tweet messages even if those tweets have replies limited, and conversations could be started that way. Still, the limitation means interviews may not feel quite as organic as they sometimes were before.

On the plus side, the feature does make interviews much easier to follow, which would have been handy for, say, the messy #KaraJack interview between Twitter CEO Jack Dorsey and Recode’s Kara Swisher back in February 2019. Dorsey had some fun referencing that mess by not allowing replies to this tweet:

Limiting replies could also be used to help prevent the spread of spoilers for upcoming movies, TV shows, and video games. On Thursday, for example, Naughty Dog posted screenshots of its upcoming PS4 title The Last of Us Part II, and limited replies to people it tagged — which was no one.

The Last of Us Part II, which launches on June 19th, promises to have a deeply engaging story, and the studio is doing everything it can on social media to keep that story under wraps until the game launches, hence the move to disable replies. Naughty Dog is also trying to stop people from sharing spoilers from major leaks of the game that hit the web in late April; Sony and Naughty Dog disabled YouTube comments on the latest trailer, too.

There is the potential that limiting replies could be used more nefariously. If politicians or public officials post misinformation and don’t allow replies, people wouldn’t be able to easily fact-check a tweet in the replies that would appear under the original misinformation, where it could do the most help in correcting the record. And interestingly, the ACLU is arguing that public officials blocking replies would violate the First Amendment — President Donald Trump has yet to make use of the feature, but it will surely inspire debate if and when he does.

In the case of misinformation, if the original account isn’t allowing replies to a tweet, users can still use a quote tweet to comment. It’s not the most ideal solution — a quote tweet only appears on your feed, so a fact-check, for example, likely won’t be seen by everyone who saw the original tweet — but it’s still a way to weigh in if you aren’t able to directly reply.

Here’s an example of how that could look. However, bear in mind that in this instance, the quoted tweet did allow replies because it was posted before Twitter implemented reply blocking.

Twitter tells us this is not true. No planned feature for verification transfer, which is obvious when you think about how much of a disaster it would be. https://t.co/2F7XhFbrra

That all said, not allowing replies can have more lighthearted uses. I’ll admit I laughed at Dorsey’s tweet that I included earlier, and Lil Nas X continued to prove he is a Twitter all-star with this great prank:

There are bound to be new ideas that emerge as more Twitter users get access to reply blocking, and I’m interested to see how people use the feature in creative ways. But I’m nervous to find out what diabolical things fast food brands will say when they can limit replies only to each other.