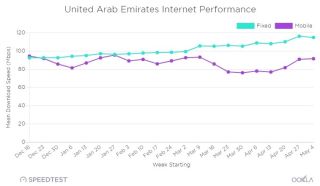 UAE, which dethroned South Korea to take the top spot in the global mobile broadband speed test in March, has fallen to fourth place in April.

The global speed test compares internet speed data from around the world every month. Data for the index comes from the hundreds of millions of tests taken by real people using speed test every month.

In the fixed broadband space, all the countries have increased their speeds to absorb the strain on the fibre optic network due to work-from-home initiatives due to Covid-19 pandemic.

The Telecommunication Regulatory Authority of the UAE has increased the average fixed broadband speeds to 100Mbps across UAE to ensure a seamless continuation of distance learning and remote working.

According to telecom operator du, its fixed customers are benefitting from an average of 130Mbps – 30% above the average speed in the UAE.

Saleem Al Blooshi, Chief Technology Officer at EITC, the parent company of du, said that du has managed to double the capacity of its fixed network to meet the demand during the Covid-19 period.

An industry expert said that both the telecom operators in the UAE – Etisalat and du – had increased their bandwidth and improved their network to absorb the strain on the fibre optic network due to work-from-home strategy.