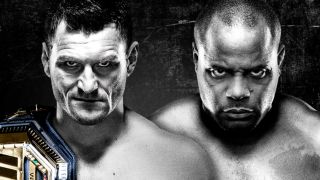 Stipe Miocic and Daniel Cormier have already served up tow brutal encounters for MMA fans, and today sees them bring the trilogy to a crashing conclusion in Las Vegas. Read on as we explain how to live stream UFC 252 and catch Miocic vs Cormier 3 exclusively on ESPN+.

UFC 252 sees the MMA carnival return to the USA, with the UFC Apex in Las Vegas the venue for another behind-closed- doors event. The main card is expected to begin at around 10pm ET / 7pm PT – and and American readers wanting to cut to the chase need only know that ESPN+ will be the place to watch the fight.

The highly-anticipated clash between the two Americans sees Miocic put his heavyweight title on the line and finally settle the argument as to who the greatest UFC heavyweight of all time is. The first meeting between the two was back in July 2018, with Cormier taking initial bragging rights after delivering a first-round knockout to take the heavyweight championship. Miocic went on to made amends in their rematch last August with a devastating fourth-round TKO to take the title back.

This fight is the culmination of their historic rivalry, with UFC honcho Dana White going so far as to say the winner will earn the right to be called the promotion’s heavyweight GOAT.

The fight could mark Cormier’s last appearance in the octagon. The 41-year-old, who stands as the first UFC fighter to win and defend both the light heavyweight and heavyweight titles, has suggested in the run up that he’ll retire following this trilogy bout.

Read on as we explain how to get a UFC 252 live stream and watch Miocic vs Cormier 3 online tonight.

UFC fans in the US will likely know that ESPN+ has the rights to all of the biggest MMA fights around. That means it’s your one and only place to watch UFC 252 tonight in the US, with that massive Miocic v Cormier trilogy fight the main event slated to start at around 10pm ET (7pm PT) .

Your options for watching the event depend on whether or not you have already dived in and bought a subscription to ESPN+. If you haven’t, then the obvious way to go is with a UFC Bundle, costing you $84.98 – orders are already open. While that might sound like a lot, it’s not just getting you the UFC 252 PPV, but you’ll get a year-long subscription to ESPN+ (that would normally cost $50 alone) – a savings of over 25% in total.
View Deal

Quite a lot, as it happens – On top of being able to stream July’s big event, a subscription to ESPN+ opens up access to over 20 exclusive live UFC Fight Nights, alongside original content including Dana White’s Contender Series, UFC Destined, and Ariel & The Bad Guy, plus classic fights, replays, and there’s also the perk of fewer commercials.

Who are Stipe Miocic and Daniel Cormier?

Nicknamed “The Baddest Man On The Planet”, 37-year-old Stipe Miocic is widely regarded as one of the best strikers in the whole of UFC, with his speed, right cross and hooks, alongside his peerless counterpunching his strongest attributes

The part-time firefighter paramedic is the only fighter in UFC history to successfully defend the Heavyweight division title three times in a row. He also holds the record for most strikes landed in a single fight, after hitting the target an astonishing 361 times against New Zealand’s Mike Hunt during their Fight Night 65 showdown in Adelaide, Australia back in 2015.

Lafayette, Louisiana’s Daniel Cormier may be one of the smallest fighters in both the Heavyweight and Light Heavyweight divisions, but his explosive mix of superior boxing skills and devastating wrestling throws has worked to excellent effect, leading him to become only the second fighter to hold titles in both weight classes simultaneously. The 41-year-old has overall record of 22 wins, two losses and a no contest over the course of his mixed martial arts career.

Who is the favorite to win the Miocic vs Cormier fight?

The bookies appear to be split down the middle on this fight with no clear favourite among those offering odds.  While a draw would leave many UFC fans unsatisfied, an honours-even result would provide a fitting end to one of most well-matched rivalries in the sport’s history and maybe the smartest bet.

When did Stipe Miocic and Daniel Cormier last step into the ring?

The two fighters will be stepping into the octagon for the first time since  their rematch fight in in August 2019 at UFC 241 at the Honda Centre in Anaheim, California. That fight saw Miocic eventually prevail in the fourth round after landing a flurry of clean left hooks to Cormier’s body before following it up with punches to the head to end the encounter and reclaim the title.

While Miocic took back the belt, it came at a price, with the reinstated heavyweight champ suffering retinal damage due to multiple eye pokes received in the fight – an injury that has kept him out of action up until this weekend’s main event.

What are the other highlights from UFC 252?

Much of the focus beneath the main event will be on rising star Sean O’Malley and his Bantamweight face-off against Marlon Vera and whether the enormous hype surrounding  the undefeated 25-year-old from Montana is justified.

The night’s most entertaining fight could potentially come in the form of Junior Dos Santos heavyweight division showdown Jairzinho Rozenstruik, which looks set to be close run battle between two of UFC’s most mighty hitters.