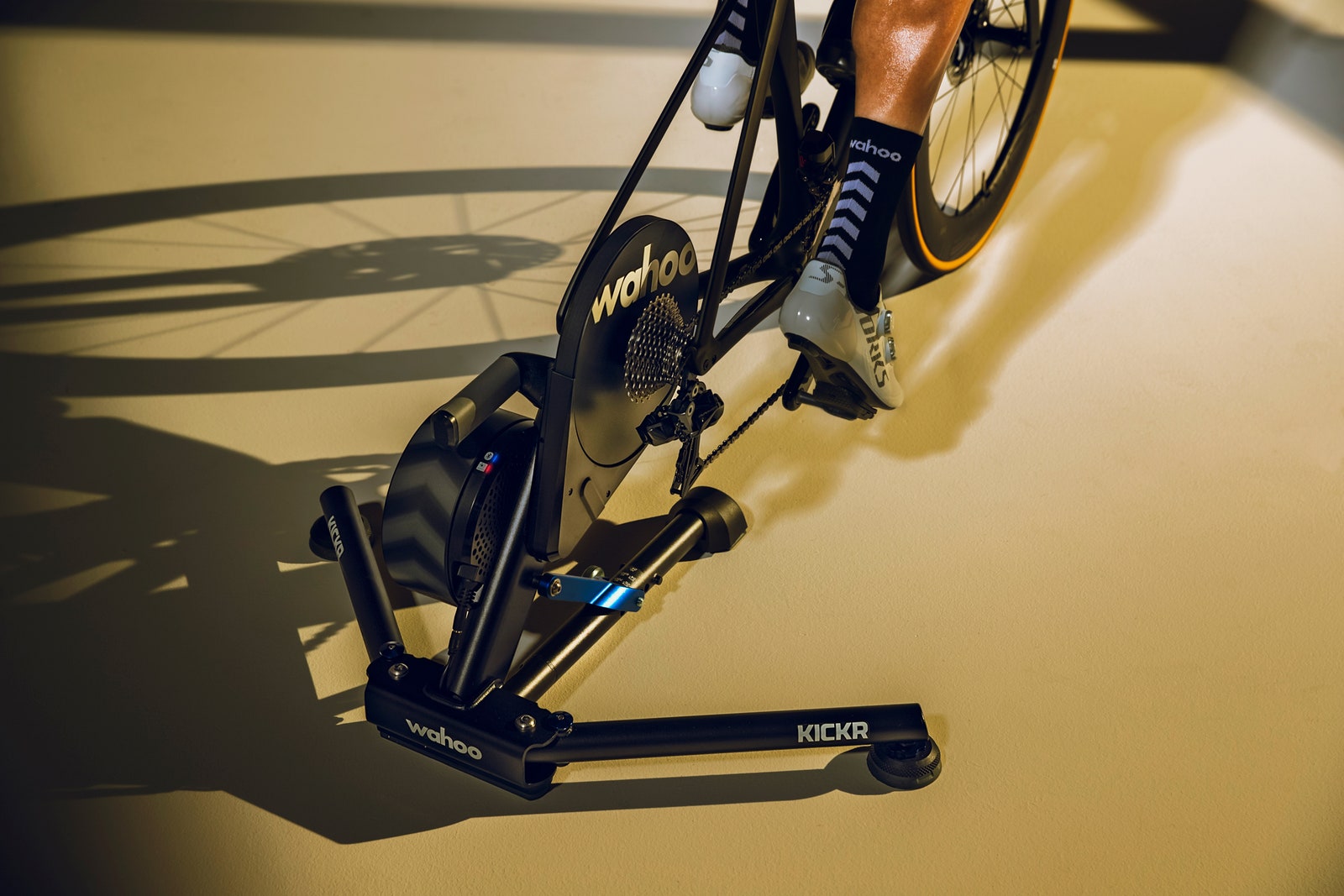 If the pandemic wasn’t enough reason to take your cycling inside last spring, the cooler weather this fall will be. And while sweating up a storm in your basement after a glorious season of summer outdoor riding seems, well, kind of gross, there are still a lot of reasons to rejoice over the increasing sophistication of indoor trainers.

Take the fifth-generation Wahoo Kickr that debuted in early August. While it carries the same price tag and compact design as its previous iteration, the new Kickr offers impressive upgrades in calibration, accuracy, and especially connectivity—those who have ever been dropped on Zwift mid-ride (or mid-race) because of a bad connection will be psyched to learn that Wahoo’s new built-in Direct Connect port will forever eliminate that issue. We’ll get to that. But first, the basics.

Unlike the Kickr Smart Bike, the stand-alone indoor bike we reviewed earlier this year, this new Kickr is a trainer; you use your own bike, removing the back wheel and attaching your frame to the unit. Even though it seems relatively simple, setting up a trainer can be as time-consuming as waiting in line at the DMV. That’s why I budgeted an entire Saturday morning to do it. The process with the Kickr, however, was so intuitive that it took less than a half hour.

And that’s despite a kink, which is that the Kickr comes out of the box with an 11-speed Shimano freehub body attached, but my “indoor” bike is my 10-year-old Specialized S-Works Amira, which is a 10-speed. Wahoo, however, thought of that variable and includes a spacer to make it compatible with 10-speed cassettes. You can also install 8- or 9-speed cassettes with spacers procured separately. For 12-speed systems, you’ll need to replace the freehub driver body.

Other intuitive features are prevalent. Two easy-to-see LED indicator lights confirm the trainer is connected and transmitting the data it’s collecting to your devices. The trainer can talk to both GPS devices (over ANT+) and smartphones (over Bluetooth) simultaneously or separately. Five available, easy-to-adjust wheel-size settings make the Kickr compatible with the most common wheel sizes found on mountain bikes and road bikes: 24-inch/650c, 650B, 26-inch/700c, and 29ers. I also appreciated the built-in carrying handle.

Downloading the Wahoo app, filling out the requisite registration, and connecting it to platforms like Zwift and Strava was a five-minute process. Thirty minutes after unboxing the trainer, I was ready to ride.

One of the less desirable features of the former Kickr was the necessity of manually calibrating it by a spin-down procedure that measured the trainer’s drag and, therefore, power accuracy. The process was time-consuming for already time-crunched cyclists. To alleviate that, Wahoo developed a proprietary auto-calibration process that not only shaved minutes off the setup but also further refined power accuracy from within 2 percent to within 1 percent. This impressively reliable measurement not only gives you an accurate read of your own power output, it also ensures that it’s not being inflated—something that would surely anger the friends you’ll be racing out there on the virtual roads.

Another issue Wahoo set out to solve with the fifth-generation Kickr was the complaint among users that, especially after long rides, the trainer felt too static. This stiffness put painful pressure on varying parts of the body. To alleviate the problem, Wahoo redesigned the bike’s feet to allow the trainer to tilt up to 5 degrees from side to side with each pedal stroke in a controlled, yet realistic, motion. The end result is a more outdoors-like riding feel and added comfort without sacrificing the Kickr’s signature stable, smooth, and quiet ride.

The final upgrade comes with delayed gratification. As I mentioned previously, Wahoo designed a built-in cable port (located next to the power jack) that will allow the trainer to plug directly in via an Ethernet connection to a home network. This feature will eliminate the mind-numbing frustration of finally carving out the time to get on a bike for a post-work ride, only to get dropped because of flaky Wi-Fi or an overloaded broadband connection.

This feature is especially exciting for cyclists who have moved exclusively to online racing because of the coronavirus pandemic. While it’s exciting, Wahoo is a little ahead of the curve on this innovation. The company’s virtual platform partners, like the Sufferfest (which Wahoo owns), Zwift, Rouvy, FulGaz, and TrainerRoad, have yet to release their own software updates to accommodate the new hardwired connection. These updates are expected by the end of this year or the beginning of next year. Until then, shore up your home Wi-Fi connection, or just get outside and take advantage of those golden autumn days.