Watching The Simpsons on Disney Plus? Here’s when it gets bad 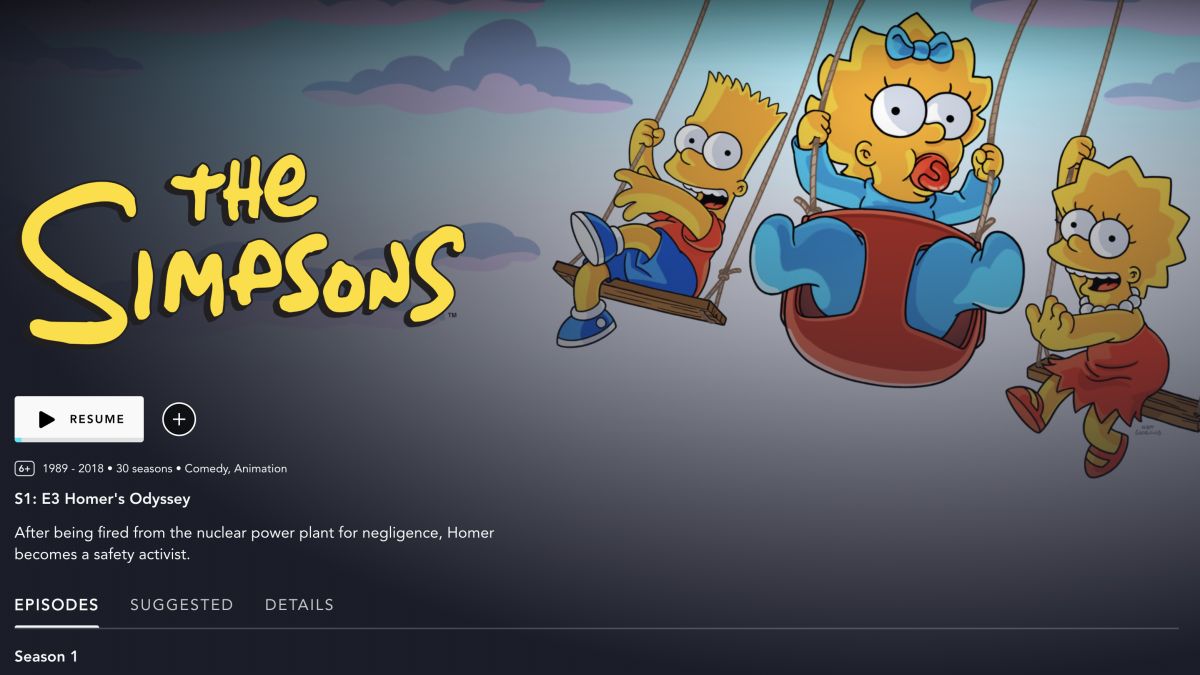 The Simpsons’ true 4:3 aspect ratio has been restored on Disney Plus, and while other animated series like Goof Troop and Chip ‘N’ Dale: Rescue Rangers are seemingly doomed to a stretched 16:9 picture forever, it’s a major win for hardcore fans of the service’s only adult animated sitcom.

If you’re considering a Simpsons rewatch, you probably recall that the show’s quality drops off at a certain point. When this occurs is arguably a matter of opinion based on your generation: for Millennial audiences like me, the consensus is that seasons 3-9 represent The Simpsons’ golden age (with a season or two of leeway on either side). I have a younger brother who contests it lasts longer, until about season 13.

Either way, the rich world of Simpsons meme culture has crystallized around seasons 1-10, and the popular Simpsons quote of the day Twitter account strictly shares scenes from seasons 1-11 only. People are still watching new episodes of The Simpsons now, of course, with season 32 on the way later this year. But for me and many others, there’s a definite golden age, then there’s everything else – which is to say 300+ episodes I’ve never seen.

I won’t comment on those, simply because I don’t know the newer seasons nearly as well. But I do want to discuss the episodes that represent the series’ obvious decline, based on my own experience of watching these earlier seasons 40+ times.

Let’s pinpoint the second my heart rips in half.

When does The Simpsons get bad?

The signs of trouble start in season 9. A lot of people point towards The Simpsons episode ‘The Principal and the Pauper’ as a ‘jump the shark’ moment. This episode features the revelation that Principal Seymour Skinner is, in fact, an impostor, when the real Skinner returns from a POW camp long after the Vietnam War. Our Skinner, it turns out, is really a former bad boy called Armin Tanzarian.

This is a wild story, and it’s extremely controversial among fans for the way it retcons the Skinner character. But the execution of this episode is actually very good: it features a number of great jokes, even if the plot is hard to swallow.

The episode is a commentary on The Simpsons’ audience at the time and its inability to accept change, but the episode ‘The Itchy and Scratchy and Poochie Show’ did the same thing more successfully. That’s because the latter episode used the in-universe cartoon Itchy and Scratchy as a proxy to explore fans’ relationship with the show as it changes. In ‘The Principal and the Pauper’, The Simpsons actually changed its canon in a way that some fans didn’t like (credit to the podcast Talking Simpsons for this observation).

‘The Principal and the Pauper’ is arguably a misfire, then, but it is a thematically interesting episode that I always find entertaining to watch. Besides, an implausible storyline is just one of the negative elements that recur in later Simpsons episodes. The show had been doing ridiculous plots for years: Homer went into space in season 5. In season 7, he had cannonballs shot at his chest just so he could hang out with some ’90s bands and impress Bart.

A more damaging factor in these later seasons is the unnecessary inclusion of guest stars playing themselves. And the first time that really becomes a problem is in the episode ‘When You Dish Upon a Star’, which arrived in season 10.

In this episode, Homer accidentally lands through the skylight of Alec Baldwin and Kim Basinger’s holiday home, leading to him befriending the stars (and director Ron Howard). He betrays their trust, ultimately, when he steals their underpants and other possessions, and the celebrities get a restraining order against him. That’s the entire story.

As well as being terribly dated – Basinger and Baldwin divorced 18 years ago – the story is the guest stars and nothing else. This episode again has a number of great jokes, but I think it’s a far worse effort than ‘The Principal and the Pauper’. The difference is that ‘The Principal and the Pauper’ is still an emotional story about the Skinner character with an intended theme, whereas ‘When You Dish Upon A Star’ makes no attempt to invest you in its story.

It just doesn’t feel like an episode you’d find in seasons 3-8, and I think this illustrated the show’s ongoing decline at the time, even if worse episodes followed in subsequent seasons.

Season 10 has plenty of great episodes otherwise, but a lower hit rate than season 9. The episode ‘Monty Can’t Buy Me Love’, which ends with Mr Burns draining Loch Ness and capturing the mythical monster, is another weaker effort that lacks a necessary emotional or thematic core to the story.

Then it just got worse from there

“Should the Simpsons get a horse?”“Excuse me, but I believe this family already had a horse, and the expense forced Homer to work at the Kwik-E-Mart with hilarious consequences.” pic.twitter.com/4lNmZFGG05April 29, 2020

I still don’t really think season 10 is a bad year of the show, and I always like it on a rewatch. It just shows more signs of problems to come: episodes without an emotional element, repetitive plot lines, guest star overload.

Season 11 is the first bad season of the show, in my opinion. The episode ‘Saddlesore Galactica’, like ‘The Principal and the Pauper’, is often called out as an instance of ‘jumping the shark’. It features The Simpsons getting a horse, a plot line that had already featured in another episode (which the show points out).

In addition, the horse-racing plot of the episode takes a left turn when it turns out all of Homer and Bart’s rival jockeys are actually supernatural creatures who live underground.

This is pretty bad, but even this episode has jokes I like. This one, for example:

But I think by this point, the damage was already done to The Simpsons. The Mel Gibson episode ‘Beyond Blunderdome’ at the start of season 11 is another one built around a guest star and little more, even if the jokes are very good.

The episode following ‘Saddlesore Galactica’ features the pretty sour death of Maude Flanders, which felt like a publicity stunt, and suggested the writers lacked the same care for the characters that the audience had. The show was already off its game – this creative decision was just another sign of that.

Even season 11 has a real masterpiece of an episode, though: ‘Behind the Laughter’, a sharp parody of the VH1 behind-the-scenes documentary series. And even season 12 has two of my all-time favorites: ‘Skinner’s Sense of Snow’, where Skinner and the kids are trapped in the school by a snow storm, and ‘Trilogy of Error’, which tells three interlocking stories about the family members during the same day, Run Lola Run-style.

Having a Simpsons marathon just stops giving me the same buzz after a certain point, though, and I inevitably forget my spot and just start again from the good episodes. And that cycle has continued for at least the last ten years.

The Simpsons’ decline was inevitable

The older I get, the less I care that The Simpsons dropped off in quality after the ’90s. Having 10 good or great seasons of a TV show is miraculous when you compare it to almost anything else.

Arrested Development managed three good seasons then two terrible ones. Community lasted for six years, and I only really love 4.5 of those. Curb Your Enthusiasm is still great after ten seasons, but creator Larry David takes entire years off between series, which The Simpsons can’t do.

Repetition was inevitable, and maintaining this form was impossible. You can only do so many fresh-feeling episodes where Homer gets a new job, or Bart misbehaves in a way that goes too far, or an episode where Marge or Homer ponder an affair, or one where a disillusioned Lisa finds a new outlet for her intellect.

According to this Wiki, Bart has had 21 love interests. He’s 10 years old.

The Simpsons doesn’t offend me with its continued existence – not when people clearly still enjoy it. It’s a fundamental truth to me, though, that The Simpsons had a golden age and then it lost some kind of magic. Maybe its success was tied in some supernatural way to the ’90s, and when the decade ended, that magic went away.

In some ways, I wonder if The Simpsons might benefit from a shift in format over the coming years. Perhaps 13 episodes on Disney Plus per year instead of 22 on Fox would be a better way to release the show (though Fox is still airing the show for season 32).

Either way, I have over 300 episodes of The Simpsons on Disney Plus waiting for me that I’ve never seen. Not having to change DVDs might just be the thing that finally gets me to watch them.