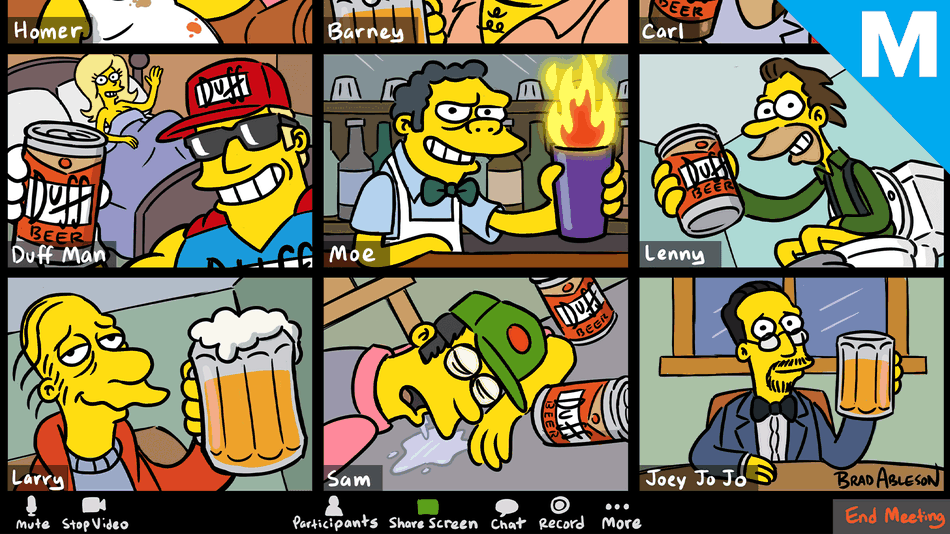 You’d be hard-pressed to find a franchise more iconic — and with more fans — than The Simpsons, the animated sitcom that’s been on the air for three decades.

Since we all live on video-calls now, we thought we’d get actual Simpsons animators to bless us all with straight-up amazing Zoom backgrounds.

Mashable got in touch with three current or former Simpsons staffers who each took their own approach to the task. Thanks to their creativity you’ll soon be dialing up fans from a Zoom-version of Moe’s Tavern or with a Simpsons-themed comic background chock-full-of Easter eggs.

Without further ado, here’s what they came up with:

Ableson worked on The Simpsons for 20-odd years as an animator and storyboard artist. In a meta move, Ablseon opted to create a socially distant version of Moe’s Tavern.

The end result is a brilliant drunken Zoom call featuring an unshaven Homer, a belching Barney (of course), and Duff Man being, well, extremely Duff Man.

There are also some amazing Easter eggs and deep cuts. Moe is, fittingly, poised to down a Flaming Moe — if you want an IRL version “How To Drink“ has a recipe — while the bottom right tile has Joey Jo Jo as a guest at the Zoom happy hour. You’d be forgiven if you didn’t remember Joey Jo Jo. He appeared in Moe’s Tavern just once, a quick gag in which he ran out in tears after Moe tells Homer his friend “Joey Jo-Jo Junior Shabadoo” has the worst name he ever heard.

“I needed one more character to balance out the composition so I went with a deep cut for hardcore fan,” Ableson said.

Atniel describes himself as a “total Simpsons Goober and proud of it!” He landed an internship with the studio fresh out of high school in 2004 and hasn’t looked back.

“It’s a pretty amazing feeling working with the second family that raised me,” he told Mashable. “I love what I do, so much that I spend most of my free time doing my own fan art of the show and sharing it with others who have the same affection I have for this yellow family.”

So it makes sense that he created a Zoom background that reimagines the iconic 1928 Mickey Mouse film “Steamboat Willie” — in Atniel’s “Steamboat Homie,” the Simpsons’ patriarch is at the wheel.

Rivette has worked on the show for nearly 20 years, spending a lot of his time storyboarding and animating the famous Simpsons couch gags. He’s also worked as an artist for Bongo comics.

His Zoom background definitely has a real comic strip vibe. It’s full of fun little details, like Disco Stu and Principal Skinner partying at the bar and a nod to Bart’s graffiti alter-ego. There’s also a touching tribute to comedic legend/Simpsons voice actor Phil Hartman tucked away in the upper-righthand corner.

“I was doing a storyboard test and got a little carried away, so I ended up doing all of these random color comps of random characters, which had nothing to do with the test,” he said. “I think it was a random explosion of creativity.”

There you have it, your Simpsons Zoom backgrounds from the people who actually make the show. Oh, and by the way, in case you need a tutorial on how to change your background, we’ve got you covered here.