You Can Carry This Inflatable Electric Bike in a Backpack 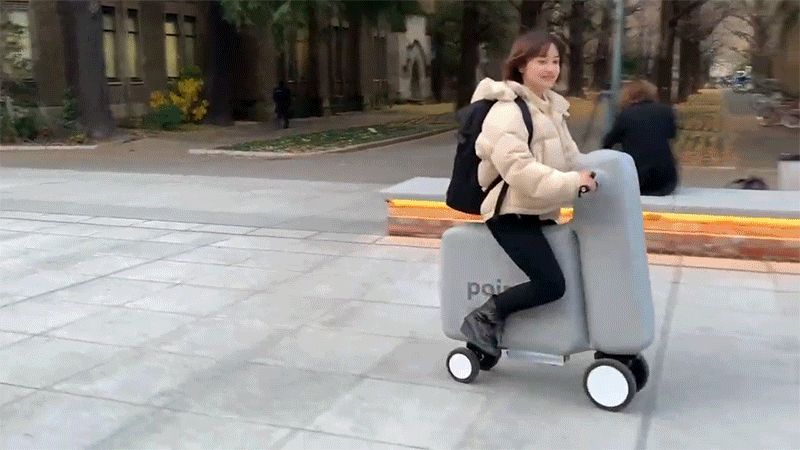 They’re better for the environment than a gas-guzzling car, but the other big advantage of commuting every day on an electric bike is that they’re easier to park. With Poimo, a prototype inflatable e-bike created at the University of Tokyo, you don’t even need to find a bike rack when you get to work, just an empty backpack to stash your ride.

Inflating the Poimo (short for Portable and Inflatable Mobility) is no more challenging than inflating an air mattress. It’s made from flexible thermoplastic polyurethane and only needs to be pumped to less than 10 PSI to support the weight of the average rider. So if you didn’t have easy access to an electric pump that can fully inflate the Poimo in just over a minute, a compact hand pump could easily be substituted, although the process would take quite a bit longer.

Once inflated, the Poimo isn’t immediately ready to carry you off to your destination. You then need to install some additional components including pairs of front and back wheels, a brushless electric motor, a battery, and a wireless controller which is entirely integrated into the separate handlebars. The final package weighs in at a little over 12 pounds, but the research team who created it believes its weight could be greatly reduced if and when the Poimo moves from the prototype research stage to a product ready for consumers.

Assuming it’s not easy to accidentally puncture, there are many advantages to using an inflatable structure instead of a rigid frame for an e-bike. Battery life and range would be maximized thanks to the lighter weight, and in the event of an accident, replacing the inflated frame would potentially be a lot cheaper than having to write off the entire thing as scrap. And while testers have reported the inflated frame is a lot sturdier and rigid than expected, it should still provide some helpful cushioning in the event a rider accidentally collides with a pedestrian. It wouldn’t be like getting hit by a pillow, it would potentially be far less dangerous than getting hit by a car.