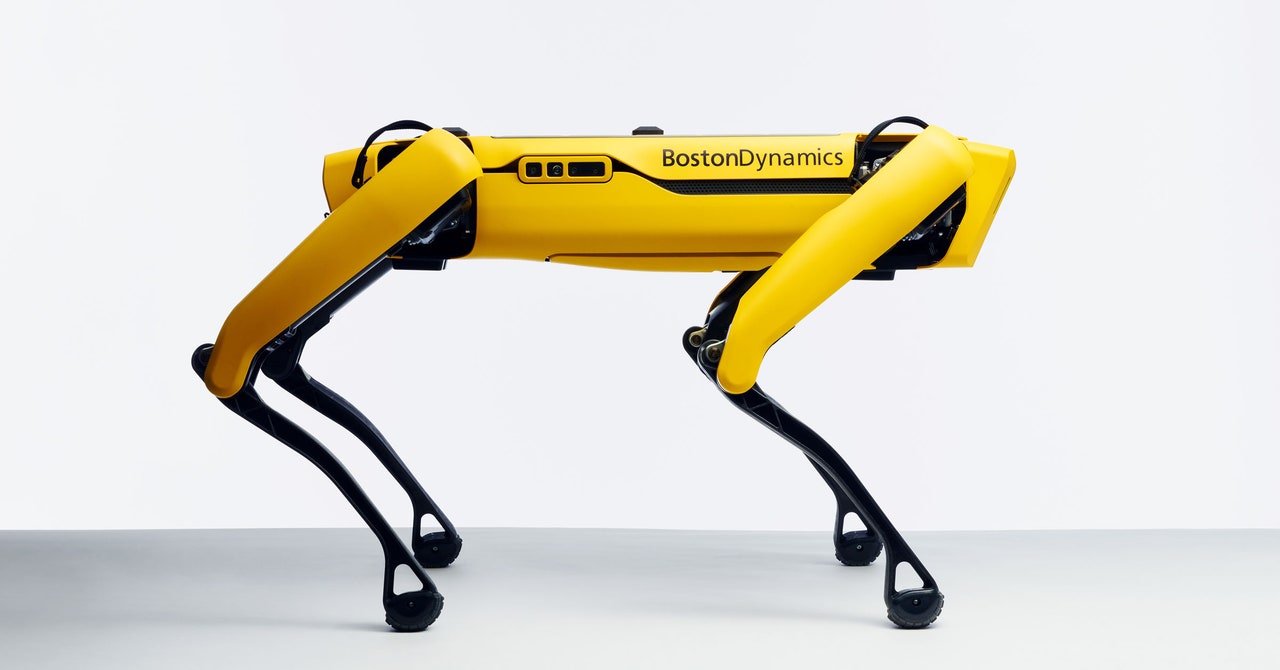 Spot, Boston Dynamics’ famous robot dog, dutifully follows my every command. The machine traipses forward, then automatically scrambles over a raised bed of rocks. I make it side-step. I command it up a flight of stairs, which it tackles with ease. It meets its match when I steer it at a medicine ball, though; it takes a tumble, and for a moment lies paralyzed on its back. But with a click of a button, Spot twists and rights itself, and recommences its ramblings.

Such unfailing obedience, yet I’m nowhere near Spot, which is roaming about the company’s testing grounds in Boston. I’m piloting the robot through my web browser from the comfort of my apartment in San Francisco, 3,000 miles away. With almost zero latency, I either use the robot’s front camera feed to click on bits of terrain—think of it like scooting around in Google’s Street View—or flicking my keyboard’s WASD keys in the most expensive videogame imaginable.

Just how expensive, Boston Dynamics is finally saying: $74,500. As of today, businesses, developers, and academics can buy Spot—max two per customer, well short of what it would take to assemble a pack of robot dogs. Until now, the company has only leased the robot to select early adopters. It worked with these lucky few to get the robot ready for life in the real world, and in large part to determine what this mesmerizingly dexterous machine might actually be good for.

This kind of extreme remote operation is a window into Spot’s budding career. Through the web interface, I can bring up feeds from the cameras dotted along the robot’s body. It uses these to path-find and detect obstacles like stairs; control algorithms then automatically move its legs so as to not plummet down them. A construction company, for instance, might program Spot to take a route around a work site, taking pictures of progress along the way. But at any time, a remote operator can take control of the robot—the latency is surprisingly minimal because the bandwidth between the operator and the machine is a mere half megabyte—and send it someplace too dangerous for humans.

“So we’ve seen that in manufacturing, mining, electric utilities, even to some extent more [hazardous] environments over the last several months as Covid has started impacting the ability to actually access a work site,” says Michael Perry, vice president of business development at Boston Dynamics. Indeed, Spot (with a tablet mounted on its face) recently went to work in a Boston hospital, helping screen patients for the disease. This is the promise of Spot and any number of other increasingly sophisticated robots: We want them to do the dull, dirty, and dangerous work—collectively known as the “3 D’s” in robotics—that shouldn’t mean humans have to risk their lives.

To tackle a variety of jobs, Spot accepts a variety of attachments. Its onboard cameras can’t see particularly far, but you can strap a lidar unit onto its pack for longer-range perception. Or you might add a high-res 360-degree camera for inspection purposes. Boston Dynamics’ engineers are also working on a robotic arm for Spot, which you might have seen opening doors a few years back. The robot is meant to be a flexible platform: Boston Dynamics has spent many years refining the hardware and software that give the robot incredible mobility, but attachments will help qualify Spot for specific jobs. A software development kit allows operators to further customize how the robot behaves and senses its world, for instance incorporating computer vision models to detect certain landmarks around a job site.