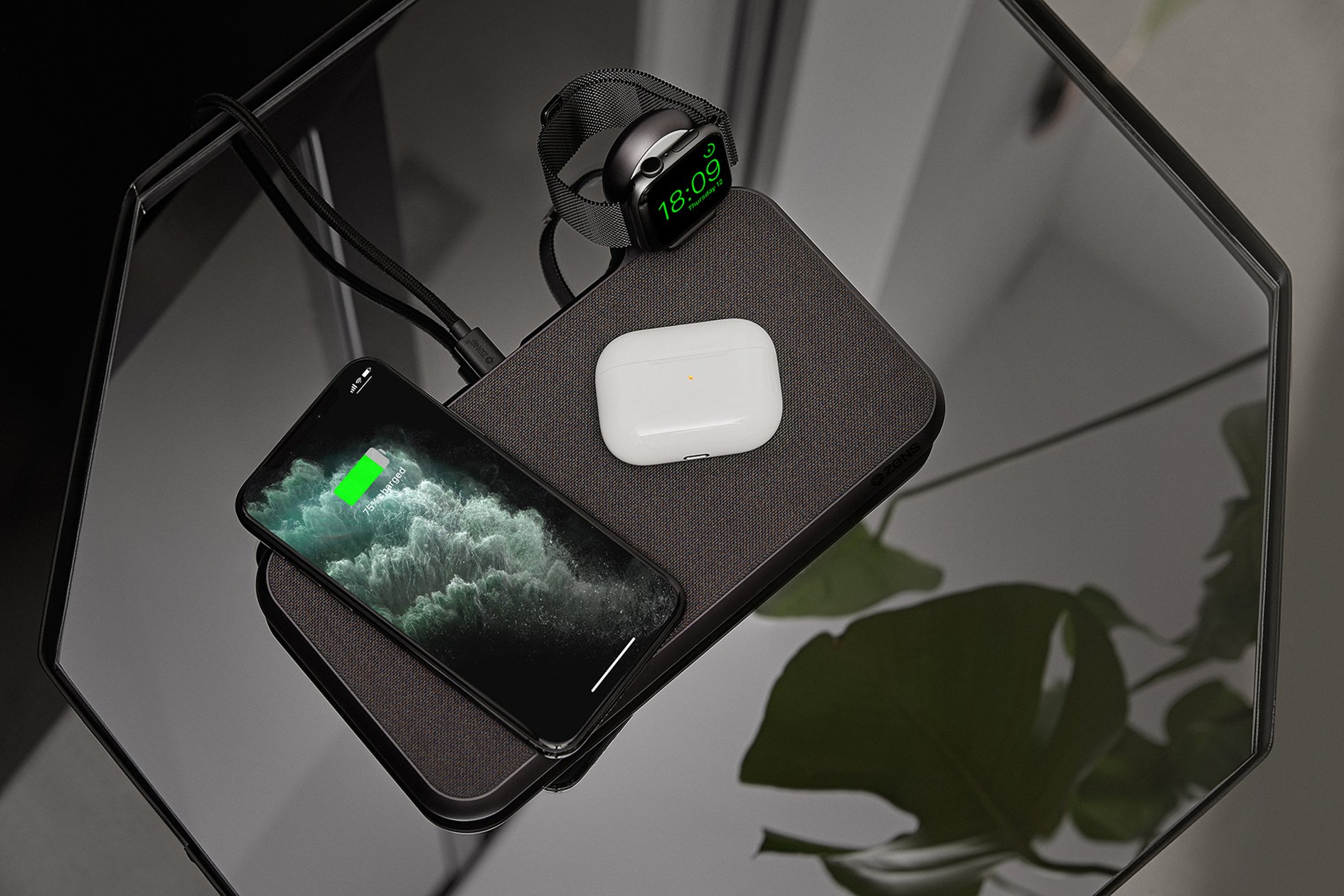 When Apple revealed its AirPower wireless charging pad in late 2017, allowing three devices to be charged on the same mat in any orientation, it sounded too good to be true. It turns out it was. After Apple made AirPower quietly disappear, Zens managed to make the tech a reality in its Liberty wireless charger. It delivers almost all the functionality Apple promised, with a steep Apple-like price tag to match.

We don’t know exactly why Apple struggled to make the AirPower charger a reality; rumors pointed to everything from heat management issues, to inaccurate battery level reports, to hardware that couldn’t live up to the design prototypes the company originally unveiled. It also needed to accommodate the Apple Watch, which is based on the Qi standard, but is not as compliant as the iPhone and AirPods charging cases are, further complicating the matter.

The Liberty charger skips the Apple Watch Qi compatibility problem altogether and can’t wireless charge the smartwatch on the pad, which is why referring to it as an Apple AirPower alternative is a tricky comparison. But it does solve a major problem with wireless charging mats that are often finicky and require you to plonk down a device with pinpoint accuracy to ensure it actually draws power.

A wireless charger that uses 16 overlapping coils to charge multiple devices without requiring them to be perfectly aligned or positioned.

€150 for the fabric covered version or €200 for the see-through Glass Edition.

Vastly improves the wireless charging experience while looking like a work of art in the process.

Charging the Apple Watch requires a cable or optional accessory, relies on a cooling fan so it’s not completely silent while powering up devices.

There are currently two versions of Zens’ Liberty wireless charger available: one with a fabric cover and a more expensive version with a glass top. Despite the higher price tag, I highly recommend the see-through version, because with its guts exposed, the Liberty is a technological work of art. The glass version reveals the 16 overlapping wire coils inside that give users the freedom to place their wireless charging devices anywhere on it. If you can see the beauty in the exposed guts of your electronics, you’ll appreciate being able to see inside the Liberty.

There are some trade-offs to the technology, however, starting with the Liberty’s size. Measuring 8.8 x 5.3 inches, the charger is roughly the same size as Amazon’s Kindle Fire tablet. The Moshi wireless charger I was using previously is absolutely dwarfed by the Liberty, and if you plan to use it on a smaller surface such as a bedside table, you’re probably going to need to make some room to accommodate it. It’s larger than you expect it to be, but it will also potentially replace multiple wireless charging pads (if that’s your current setup).

Once you use the Zens Liberty, you’ll see how the charger justifies its premium price tag. Unlike other charging pads that either require you to place your device in a very specific spot and orientation, or use a hidden magnet to automatically align and make the placement process easier, the Liberty allows you to plop a device down almost anywhere on its surface. I say almost anywhere because you still need to ensure a smartphone or charging case is positioned over the coil—another reason to opt for the glass top version. A device hanging too far off the edge simply won’t charge, but otherwise the charger is very forgiving and reliable.

Thanks to a beefy 60-watt wall wart, the Liberty can wirelessly charge two devices at up to 15 watts each, which is the fastest wireless charging speed available for all but a few of the most recent smartphones to hit the market. It took about three hours and 15 minutes to fully charge a Huawei P30 Pro with a hefty 4,200 mAh battery. You’ll still get a much faster charge by plugging in a cable—Oppo offers a wired smartphone charger that can push up to 60 watts—but 15 watts is still a decent amount of power. By comparison, the tiny charger that Apple still includes with most iPhones is only rated at 5 watts, so the Liberty could very well be a step up for you in terms of charging speeds.

In addition to smartphones and other devices, the Zens Liberty can charge smartwatches that properly support the Qi standard. Because the Apple Watch isn’t completely Qi-compliant, you’ll need to jump through some minor hoops to get it to charge. In one corner of the Liberty pad, you’ll find a USB-A port hidden beneath a rubber cover, allowing you to connect a charging cable for powering up a third device. You can plug in the Apple Watch’s bundled charging cable here, or for a slightly more elegant solution, Zens also sells a matching Apple Watch charging accessory for the Liberty, but that adds an extra €44.99 (~$50) to the Liberty’s price tag.

If there’s one issue with the Zens Liberty that could be a deal breaker for some, it’s this tiny vent located on the front side of the charging pad. Electricity running down a wire will cause it to heat up, and given just how much wire is coiled up inside the Liberty, it actually has its own cooling fan so it won’t overheat. I discovered this accidentally the first night I was using the Liberty. It was sitting on the side table next to my bed, and when I placed my iPhone on it to charge overnight and rolled over to fall asleep, the fan annoyingly whirred to life.

It’s by no means a deafening roar—in the daytime I can barely hear it and the fan only sporadically runs when a device is charging. But you’ll definitely notice it in the still of the night, which has meant that, at least for me, the Liberty has been relegated to the desk in my office. If you’re a heavy sleeper, however, it might not be an issue.

The other potential showstopper is that the Zens Liberty is one of the most expensive wireless chargers you can buy. The fabric covered version is €150 (~$162) while the fancier Glass Edition is €200 (~$216). At the moment it’s the only wireless charger on the market that can charge two devices with the freedom to place them anywhere on the pad, and it’s a feature that works perfectly and reliably, but you can find much cheaper alternatives, closer to $60, if you’re willing to forego that convenience. As a piece of technological and functional art, however, it just might be a solid bargain.