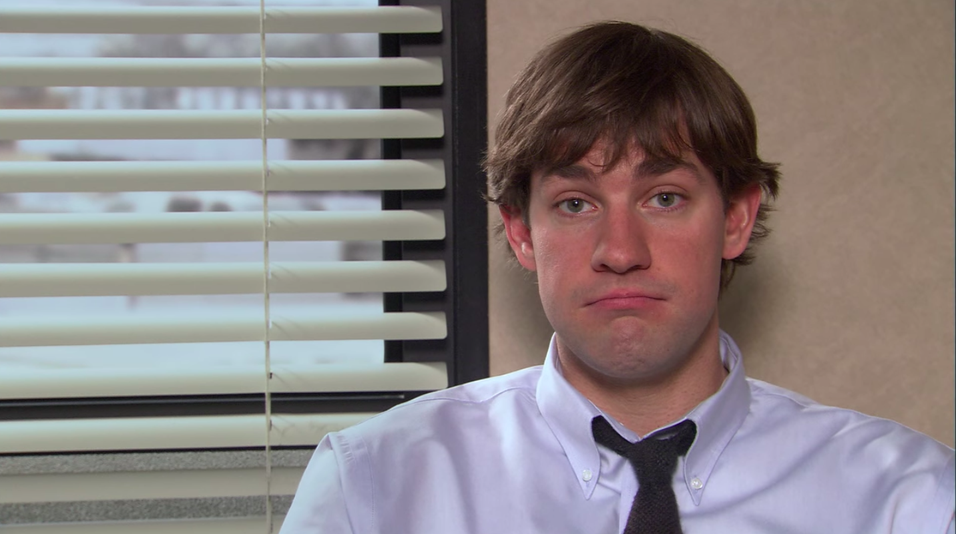 If you’ve rewatched The Office more than once, you’ve likely picked up on some Easter eggs or noticed certain filming consistencies and wondered whether or not they were intentional.

On the latest episode of the Office Ladies podcast, former co-stars Jenna Fischer and Angela Kinsey talked about two of these instances and shed some real light on just how high the attention to detail was on set.

The episode Fischer and Kinsey discussed was Season 2, Episode 21, “Conflict Resolution.” It shows everyone getting their photo taken for an ID badge, and also follows Michael who’s made it his mission to sort through Toby’s stack of employee complaints and resolve all the issues in the office. But it also features two details that only the most attune fans will pick up on.

The first is that Jim Halpert seems to be the only member of the team whose talking heads are filmed in front of a window with an outdoor view. And guess what? That was done intentionally.

After a fan wrote in to ask why everyone other than Jim films their talking heads in front of the window that faces the bullpen of the office, Fischer investigated by emailing show-runner Greg Daniels.

“I asked him, was this deliberate? Was it an accident? And he said it was something that Randall Einhorn, our cinematographer, suggested to Greg starting with the pilot and Greg absolutely loved it,” Fischer explained.

“He said Randall’s intention here was that it didn’t necessarily only have to be Jim, but the idea was that any character that had a future outside of Dunder Mifflin or held some sort of internal optimism would sit in front of a window leading out into the world, but characters who didn’t want to leave Dunder Mifflin — or who maybe were in more of a position of being trapped — would do their talking heads facing into the office,” she continued.

The exception, of course, was Michael, who sometimes filmed talking heads from his desk —  which has a window behind it. But otherwise, the bullpen background seems to stay consistent in early seasons, and other fans have even picked up on it later in the series.

“That’s really deep,” Kinsey said. “I’m sitting here wracking my brain to think if my character ever sat on that other wall with the window facing out behind her and the one that comes to mind was when you and I did ‘big pregs, little pregs’. I think it’s the only time I ever sat there.”

“Well for a very long time I only sat there if I was with Jim, which was really the only possible future for Pam outside of office I think,” Fischer said. “Otherwise, she was rather trapped in her bad decision of being with Roy.”

The episode ends with Jim meeting Jan at corporate to interview for a job, so after sitting in front of the window for all of his talking heads he did in fact pursue some sort of growth. But the talking head insight wasn’t the only fun tidbit from this episode.

At around four minutes when Michael’s trying to settle a dispute between Angela and Oscar a fan noticed an interesting plaque in the back of Michael’s head.

“This moment happens at 4:32, and right next to Steve’s head on this pillar you can see this plaque. It is a certificate of participation for Marc Christie. This is one of my favorite things about our set,” Fischer said. Kinsey went on to explain that the plaque is so funny because Christie was the best boy grip and the key grip for seasons one through three of the show.

“It’s the art department that’s ultimately responsible for any kind of card, sign, certificate or logo that’s created specifically for the show,” Fischer said. “So our art department created the Dunder Mifflin logo, and they created all the little plaques and signs and certificates that hang around the office.”

“In the effort to give just like a fun personal touch they would include the names of real crew members,” she said.

Kinsey explained that there were also “Salesman of the Year” and “Humanitarian Award of the Year” plaques that featured names of our crew members, and Fischer told the story of her favorite fake certificate on the wall.

“My favorite one involves our first AD (Assistant Director) Kelly Cantley,” Fischer explained. “I guess Kelly had gone around and looked at all the plaques and noticed that her name was not on any of them.” After spending a couple of days joking about her lack of plaque recognition, a new plaque mysteriously appeared on the wall.

“It’s on the pole by Stanley’s desk, and here’s what it said: ‘Whereas it came to our attention that Kelly Cantley was whining that a lowly second assistant director had a plaque with her name on it, and whereas Kelly Cantley made a comment on the air regarding that fact, we have decided to give her that certificate because we love her,” Fischer read.

So on your next Office rewatch be sure to take note of where everyone’s talking heads are being filmed, and try to hit pause when you see certificates on the wall and read what’s written on them. How fun!

Want to stream ‘Cruella’ at home? Here’s where to watch.

‘Jeopardy’ guest host lineup includes LeVar Burton, as it should