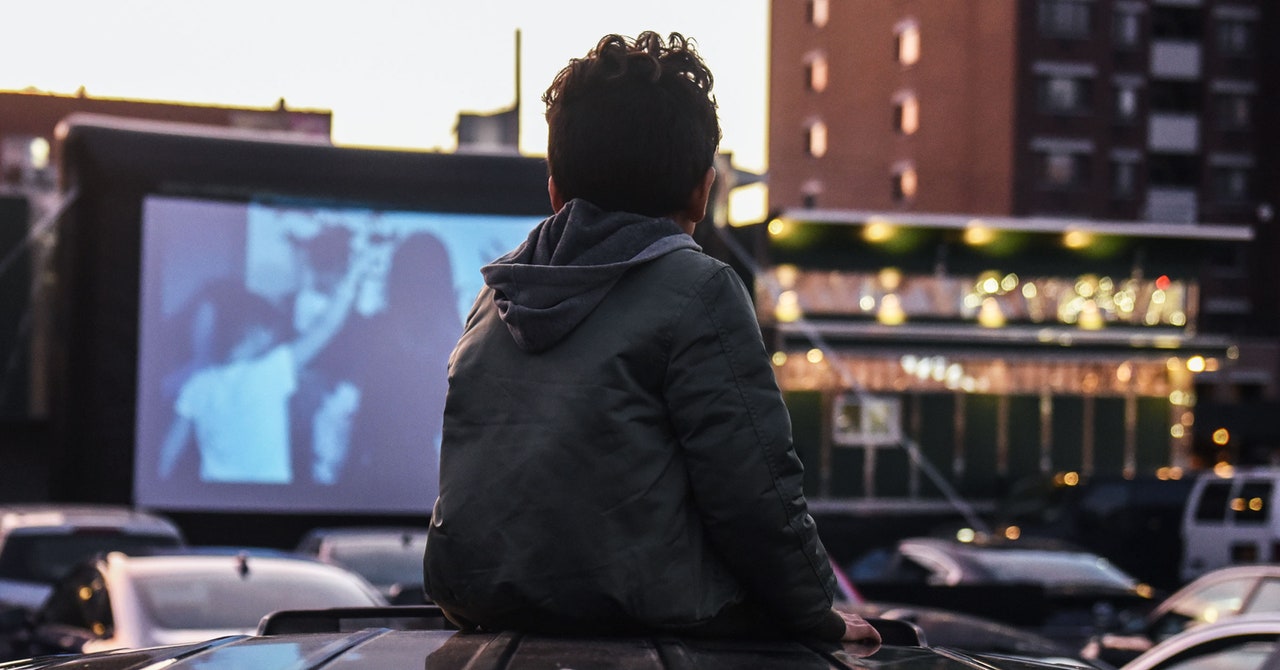 Drive-ins don’t usually have Rite Aids. Or post offices. They certainly don’t open with a kid in a T-shirt reading a message off their phone advising everyone to “wear a mask when leaving your car.” This place, though, isn’t a typical drive-in. It’s the parking lot of the Bel Aire Diner in Astoria, Queens, converted into a movie venue in the interest of keeping the restaurant’s staff employed and its customers safe from Covid-19. Like every other place on lockdown, it’s making it work.

On this particularly mild night in June, that means screening a documentary called Olympia, about Academy Award winner Olympia Dukakis. The actress is Greek, after all, and Astoria is home to a large Greek population. So when their opening night at Manhattan’s Quad Cinema got nixed by the coronavirus lockdowns, the movie’s producer and director—Anthoula Katsimatides and Harry Mavromichalis, respectively—decided to take it to the Bel Aire, which has been holding its parking lot screenings since it erected—or, rather, inflated—a portable screen and started playing movies like Grease and Dirty Dancing in early May. Although Olympia is a relatively unknown film, tonight’s screening is sold out: 45 cars total. They almost always sell out. The filmmakers couldn’t be more pleased. “Out of this horrible Covid thing that has happened,” Mavromichalis says, “you have little things like this that are just, I think to me, beautiful.”

Depending on where you live and the current state of your region’s stay-at-home orders, chances are you’ve noticed an increased awareness of drive-in movie theaters. Mainstays of mid-century Americana, most of them shut down long ago, unable to compete with the the cushy stadium seats, eye-popping visuals, and surround sound of multiplexes. But not all—there are still 305 such establishments in the US, according to the United Drive-In Theater Owners Association, and in the days of Covid-19, these and newer pop-ups have proven invaluable to people dying to be outside and entertained while also wearing masks and maintaining social distance.

Really, there isn’t a better metaphor than the drive-in for the current state of socializing in many American cities. People are together, or alone—or together alone—in individual clusters, isolated from each other while also sharing in the same experience. The coronavirus lockdowns have forced many people to rethink not only how they work and live but also how they share experiences with other people. Restaurants, bars, theaters, events—all of the staples of public engagement and human interaction have been altered, possibly permanently. In that shuffle, old modes, like drive-ins, have been pulled from the dustbin, a renaissance that could continue after every state is reopened.

Dorothea Mayes is witnessing this firsthand. Mayes has owned the Skyline Drive-In outside of Olympia, Washington, since 2004 (it first opened in 1964), and when people started searching for ways to hang out during the state’s stay-at-home orders, she started seeing a lot more people show up at her 312-car theater, close to double her usual attendance. People from Seattle, people from Bellevue—both over an hour’s drive away. “Social distancing is built in, so people who are very hungry to get out are coming,” Mayes says. “People are making dates to see each other. They bring their lawn chairs and they sit in front of their cars and they visit. They make play dates.”

The reawakening isn’t just confined to established drive-ins, either. This summer, Tribeca Film is hosting pop-up drive-ins in New York, Texas, and the Rose Bowl in Pasadena, California. There’s a plan to turn the parking lot at Yankee Stadium into a drive-in, as well as similar efforts in Brooklyn’s Greenpoint neighborhood. Then there’s the Bel Aire’s auto theater, which not only gives folks in Astoria a way to watch movies but also provides jobs for the diner’s front-of-house staff, all of whom had been furloughed when the restaurant closed its doors to eat-in customers. The Bel Aire didn’t close during the coronavirus lockdown—they do a brisk delivery business in the neighborhood—but during the first two weeks, business was down 70 percent compared to what it normally would be, says general manager Kal Dellaportas. “We’re a big place, we’ve been here a long time— but that’s scary,” he says. Once the drive-in opened, that figure changed to 30 percent. “We’ve been able to hire back almost all of our workers. Maybe not for 40 hours, but maybe for 20 hours a week and to get people out of the house. It’s helped a lot.”