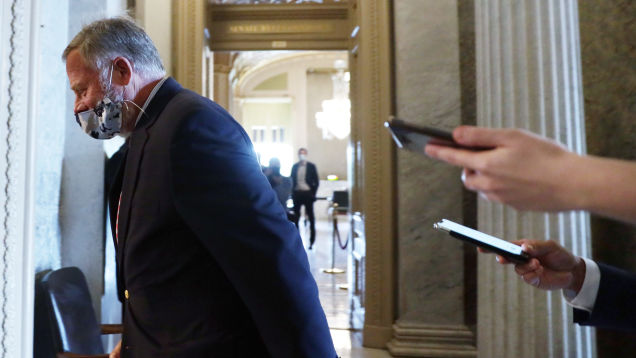 One of Richard Burr’s chief responsibilities in the Senate was to provide oversight of the FBI’s intelligence operations. But he often served instead as an advocate in its never-ending quest for greater authority. In many ways, he worked to undermine the importance of the Fourth Amendment, offering up Americans’ digital privacy as a sacrifice in exchange for greater national security.

As one user put it, “Burr never met a cop he didn’t like (until, presumably, today).”

On Thursday, Sen. Mitch McConnell announced that Burr—who is now perceived to be in serious legal jeopardy over a series of suspicious stock trades—is stepping down as head of the influential Senate Select Committee on Intelligence. The announcement came roughly half a day after the Los Angeles Times reported that the FBI had seized Burr’s phone after serving him with a warrant at his Washington-area residence.

According to the paper, federal agents first obtained information from the North Carolina senator’s iCloud account and then flipped it to get a warrant for his phone.

McConnell’s brief statement offered no words of support. “We agreed that this decision would be in the best interests of the committee and will be effective at the end of the day tomorrow,” he said.

Burr, one of the most powerful members of the Senate, unloaded somewhere between $628,000 and $1.72 million worth of stock holdings in 33 separate transactions on February 13, according to report from ProPublica. Within a week of the selloff, the stock market began a precipitous drop in response to the novel coronavirus outbreak.

As the intelligence committee chairman, Burr was privy to classified information regarding the coronavirus that was presented by the Central Intelligence Agency in early February. And while he was publicly saying that the U.S. was “better prepared than ever to face emerging public health threats,” he was later caught on tape telling some of his wealthier constituents that the proverbial shit was about to hit the fan.

During a social club gathering on February 27, Burr compared the coronavirus to the 1918 pandemic, which is thought to have killed roughly 50 million people worldwide.

Congressional insider trading was made illegal eight years ago after lawmakers got caught saving their own asses during the 2008 financial crisis using information that was not made available to the public. Notably, Burr was one of three senators to oppose the bill.

Burr has denied doing anything illegal and in a March statement called on the Senate Ethics Committee to investigate his transactions. “I relied solely on public news reports to guide my decision regarding the sale of stocks on February 13,” he said. “Specifically, I closely followed CNBC’s daily health and science reporting out of its Asia bureaus at the time.”

Burr was not the only lawmaker who dumped stocks while government officials downplayed the potential impact of the virus. Senators James Inhofe, Kelly Loeffler, and Dianne Feinstein have also fallen under scrutiny. However, the New York Times reported Thursday that Burr’s case was “more advanced” and said he was the only one who did not deny that they personally initiated the sales.

In 2016, Burr and Feinstein co-authored anti-encryption legislation that was designed to give law enforcement, such as the FBI, “backdoor” access to Americans’ cellphones. Civil libertarians widely regarded the bill as a threat to consumers. Had it passed, the strong encryption deployed on user devices such as iPhones would have been outlawed, leaving them not only accessible to police but likely hackers and spies as well.

Kevin Bankston, a prominent privacy advocate (who would later take a job at Facebook), would describe the Burr-Feinstein bill as one of the “most ludicrous, dangerous, and technically illiterate” proposals he had ever seen.

“I could spend all night listing the various ways that Feinstein-Burr is flawed [and] dangerous,” Matt Blaze, a renowned cryptographer, said at the time. “But let’s just say, ‘in every way possible.’”