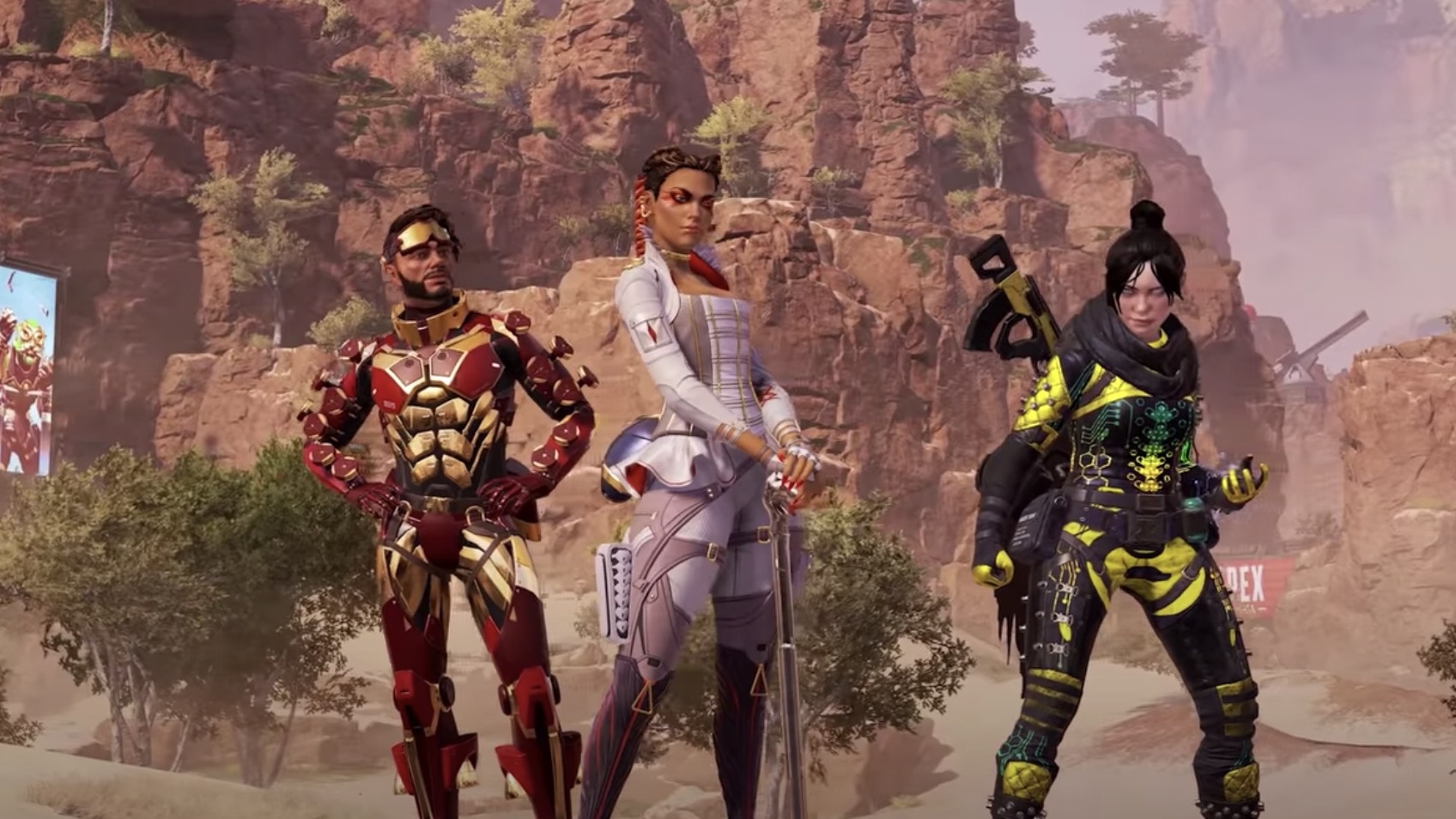 EA surprised many with the sudden announcement of Apex Legends back in February 2019, a free-to-play battle royale shooter that sees the publisher going toe-to-toe with genre mammoths PlayerUnknown’s Battlegrounds and Fortnite Battle Royale.

Developed by Respawn Entertainment and set in the Titanfall universe, Apex Legends is a squad-based battle royale shooter where teams of three go up against 57 other players to try to gather loot and be the last person (or squad) standing.

However, unlike Fortnite and PUBG, Apex Legends sees players take on one of eight classes, each represented by a unique character (imagine Fortnite mixed with Overwatch and you’ll be on the right track.)

Apex Legends has now sailed past its one year anniversary and is into its fifth season, Fortune’s Favor, which began on May 12 2020.

If you’re new to Apex Legends and looking to see what you’re missing or you’ve dropped off the map for a while and you’d like to catch up on the latest, we’re here to keep you up to date on what’s fresh in Apex Legends.

Apex Legends is an engrossing, revamped take on battle royale that as it stands cannot be beat for its attention, detail and care:

Great use of team interaction

Definitely not a single-player game

As we said in our full Apex Legends review:

“Truth be told, the Battle Royale movement has never quite grabbed me. I dabbled in PUBG and spent a dozen hours or so with Fortnite, yet nothing ever quite stuck the landing. Apex though, has got me hook, line and sinker. Featuring intuitive controls, an outstanding comms system and remarkable rogue’s gallery, Respawn has created what feels like the AAA outing for the genre.”

So what’s new? Well, there’s a new Legend, some map changes, an all new Battle Pass and the first ever season quest to get stuck into. Read on for a rundown of what to expect.

As with previous seasons, Apex Legends Season 5 has introduced a brand new Legend. This time, it’s Loba. Described by Respawn as a High Society Thief, she’s expected to bring a touch of class to proceedings.

Loba, last name Andrade, is seeking revenge against last season’s new Legend, Revenant, for the murder of her parents when she was just 9 years old. According to Respawn, “Left with nothing, Loba survived by picking pockets. As her skills improved, Loba used every tool at her disposal to lift herself from the gutter. Everything changed when she broke into a supposedly impenetrable facility and got her hands on the Jump Drive tech stored inside. With her new teleportation bracelet, the most secure and unattainable items were within her reach. So was her dream of living the high life.”

As far as Loba’s abilities are concerned, her Tactical Ability is Burglar’s Best Friend which enables her to teleport to hard-to-reach places or quickly escape trouble. Her Passive Ability is Eye for Quality with which she can see epic and legendary loot through walls. Finally, her Ultimate Ability is Black Market Boutique with which you can place a portable device that allows you to teleport nearby loot to your inventory.

Season 5 has brought some map changes, which see some big alterations in Kings Canyon due to ongoing excavations. Respawn has called it “a new beast, forever changed by the actions of Loba and the Syndicate.”

So what’s changed? Well, both Skull Town and the Thunderdome have been removed with the hope of making other parts of the map stand out as, now, The Broken Coast stretches from Octane’s Gauntlet through to the cliffs that lead into Water Treatment.

A place of interest called Salvage has been added to the Broken Coast and players will find some high-tier loot and a two-way zipline balloon for a speedy way to move around the bay. Also uncovered on the Broken Coast is a part of the underground network Loba snuck through.

Another change has been made to the upper east corner of Kings Canyon. Respawn has added more land mass and created more playable space in order to “bring more balance to how players flow through the map.”

A new zone called The Offshore Rig is a large addition, connecting to the former Relay and Wetlands, which has been replaced by the excavation of the Capacitor with an underground pathway to Singh Labs.

There are also some new camps around the Capacitor area where players should be able to take a moment and re-stock to decide what path they want to take next.

Players will also noticed the Reclaimed Forest looks a little different with some new routes leading through the area and the expanded exterior of Singh Labs.

Charged Towers are another interesting addition uncovered in the excavation. At these glowing towers spread across the map, players can mess with a control panel and set off a blast that restores the ultimate of every player on the Charge Tower platform.

For the first two weeks of the new season Kings Canyon will be the only map available so that players can get used to it. After this, map rotation will start again and bring World’s Edge back in.

For the first time, Season Quests have come to Apex Legends and this one is called The Broken Ghost. Players embarking on this quest will spend the season searching for nine pieces of a strange artifact.

They’ll be able to collect Treasure Packs in competitive matches once per day in order to unlock rewards and Hunts for the pieces. Though players can only unlock one Treasure Pack per day, those who fall behind can purchase them for 25-ac.

There are 45 Treasure Packs to collect which could contain Crafting Metals, BattlePass XP, Apex Packs, or the ability to play a new weekly Hunt for the next piece of the artifact.

There will be nine weekly Hunts in Kings Canyon at Night in order to retrieve pieces of the artifact which players can do solo or with their squad. Succeeding in a Hunt will yield a weapon charm and unlock chapters that reveal the full Broken Ghost story.

Hunts that have been unlocked will be re-playable and the first will be available on May 19 after players have five Treasure Packs.

It wouldn’t be a new season of Apex Legends without a brand new Battle Pass. For 950 Apex Coins you can pick up this pass which offers 110 levels to climb by completing daily and weekly challenges, with more than 100 exclusive items including Legendary Skins, Apex Packs, Loading Screens and Music Packs to earn.

Players who pick up the battle pass immediately unlock the Legendary Hemlock Retrofitted skin and three new Rare Legends skins. Getting through the rest of the levels could see you earn Rare and Legendary rewards like the Fool’s Gold Mirage, Sky Marshal Bangalore, and the Precision Caliber Reactive Wingman.

Largely, things are looking the same for Series 4 Ranked League, with none of the huge changes that were introduced last time. Respawn has decided Splits are working well and that these won’t be changing. This series will start with Kings Canyon before moving to World’s Edge on June 23rd. Scoring, the RP cost of entry and assists will also remain unchanged.

In order to help players who find their progress frustrated by things out of their control like crashes and internet outages, Respawn has said it’s introducing a new feature called Reconnect. With this, players who have been disconnected by accident can simply restart and, if their session is still going, they’ll be reloaded back into the session.

Apex Legends can be difficult to get to grips with. There are a lot of different characters each with their own abilities and skills, plus this battle royale arguably leans more heavily on strategy and teamwork than some of its competitors.

Get ahead of the pack with our selection of Apex Legends guides, designed to help you become a champion.

Apex Legends can be downloaded for free from the PlayStation Store, Xbox Store, Origin Store or Apex Legends website. Simply search for the title, download the game and enjoy!

But do keep in mind that a good internet connect and subscription to either PS Plus, Xbox Live or Origin Access is required to play.

The good news is that Apex Legends is also coming to mobile in the future, following in the footsteps of Fortnite and PUBG.

Respawn Entertainment shared a roadmap for the first year of Apex Legends which showed players its plans for the first four seasons. Now that we’re into season 5, that roadmap has expired. Respawn hasn’t confirmed if it will release a similar roadmap for year 2 but we’ll be keeping our eyes peeled.

Is Apex Legends coming to mobile?

Yes. In EA’s quarterly earnings report, the publisher announced that it’s looking at bringing the Respawn Entertainment-developed game to mobile platforms and to both South Korea and China.

We shouldn’t expect to see Apex Legends on mobile for at least a year, though. According to EA Chief Executive, Andrew Wilson, the game won’t launch until the fiscal year 2021.