Avatar 2: release date, first images and everything we know 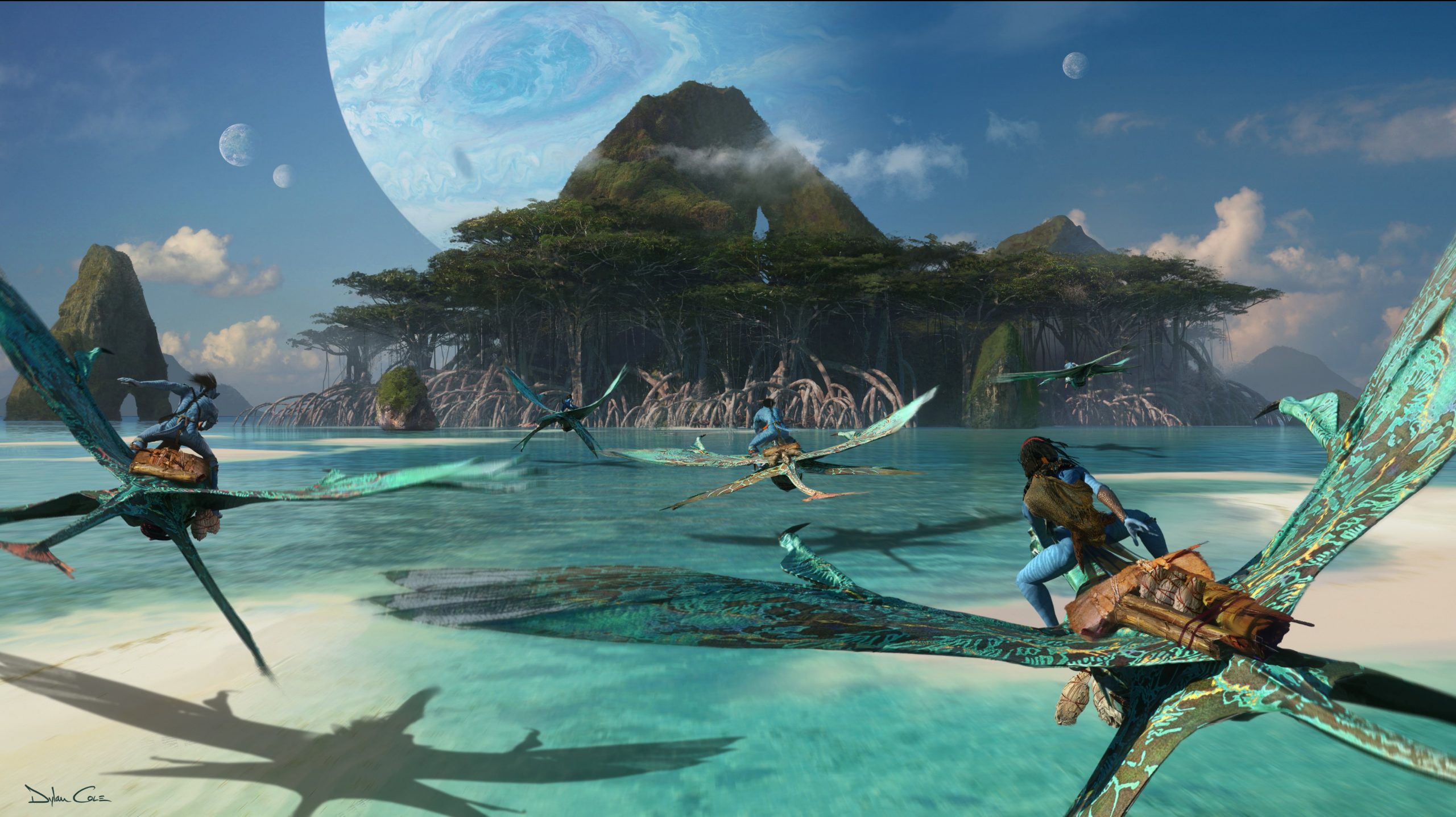 The original Avatar took over the world with its astonishing performance capture, CG backgrounds, and 3D photography. James Cameron’s awesome adventure became the highest grossing film of all time when it released in 2009. Success often leads to sequels, so will there ever be an Avatar 2? And how much will production be impacted by Covid-19?

Originally slated for 2014, the as-yet-untitled follow up is the first of four sequels on the way. We’re heading back to Pandora, where the indigenous Na’vi people fought off the human invaders ravaging their beautiful lands to mine precious “unobtainium”.

But what will we see from the movie that – until 2019’s Avengers: Endgame – was the biggest blockbuster hit of all time? We’ve sent out an early recon mission to Pandora to find out everything you need to know about Avatar 2’s release date, title, plot, cast and more. Just no unobtainium this time, promise.

You know that Star Wars-shaped hole that’ll be making December release schedules feel rather empty after The Rise of Skywalker? From 2021 onwards, Avatar sequels will be ready to fill it. 12 years after James Cameron’s original movie smashed box office records, Avatar 2 will be making its debut on December 17, 2021, unless the coronavirus has anything to say about it.

Like Peaky Blinders, No Time to Die, and A Quiet Place II, the novel coronavirus has thrown the Avatar 2 release date in doubt. However, while it had delayed live-action production in New Zealand, filming resumed in May 2020.

Virtual production and visual effects still progressed as normal during the brief cessation in filming, however, because such activities are “much more conducive to social distancing.” It remains unclear how much the disruption will delay the sequel’s release dates, if at all, so we’ll have to wait and see.

Avatar 3, Avatar 4 and Avatar 5 were written simultaneously and are also in the works, but we won’t have to wait nearly as long for those – they’re currently slated for December 2023, December 2025 and December 2027 releases if you want to get them in your diary early.

The first images of Avatar 2 – concept art from the watery parts of Pandora – were unveiled during CES 2020. They show more of the movie’s ocean-based settings. Check out a couple more images below:

Does Avatar 2 have a proper title?

Nothing official beyond Avatar 2. A 2018 BBC report claimed that the four new films may be titled Avatar: The Way of Water, Avatar: The Seed Bearer, Avatar: The Tulkun Rider and Avatar: The Quest for Eywa (Eywa being the name of the Pandoran deity worshipped by the Na’vi).

Alas, if you think they sound a tad uninspiring, the bad news is that they may well be real. “Those titles are among the titles that are in consideration,” Cameron told ET. “No final decisions have been made yet.”

Alternatively, he could just keep things simple by going the Alien route with Avatars, Avatar3, Avatar Resurrection and Avatar Vs Predator. Or maybe not.

Avatar 2’s story: what we know

Plot specifics are currently as elusive as the ‘Unobtainium’ the human invaders were trying to extract from Pandora in the original Avatar. We do know, however, that the story will pick up around a decade after the first film, and that Jake Sully (whose human consciousness was permanently downloaded into his Na’vi body) and Neytiri now have children. It’s also been confirmed that much of the movie will take place around Pandora’s oceans, with the newly introduced sea-faring Metkayina clan playing a key role.

“We made the decision for the sequels not to do necessarily what other science fiction movies do, which is if they want water they go to the ocean planet; and if they want snow, they go to the ice planet,” Cameron’s long-term producing partner Jon Landau said in an interview with Slashfilm. “We looked at all the wonders the Earth shows us, and we realized we could travel our whole lives and not see all the true wonders Earth has. So Jim made the decision to set the sequels all on Pandora. Our stories introduce us to different environments, and also different cultures.”

Of course, there are also going to be run-ins with those annoying, moon-pillaging humans of the Resources Development Association (RDA). “The storyline in the sequels really follows Jake and Neytiri, and their children,” Cameron told Variety. “It’s more of a family saga about the struggle with the humans.”

While Avatar 2 will be the second act of a five-movie saga, the plan is for it to function as a film in its own right, while still being part of a wider arc. Indeed, Cameron’s desire to craft a story that was truly worth telling is one of the main reasons Avatar 2 has taken so long to materialize.

“We’re making standalone movies that will stand alone,” Landau told Slashfilm. “Rather than rushing into doing the sequels, because Jim doesn’t rush it, we have to build our foundation, and that’s the scripts. Knowing that we wanted to tell multiple stories, we didn’t just want to solve one script. We wanted to solve the scripts for all of the movies we wanted to make before we ventured out into making them. That’s what took us the time.”

From the set of the sequels: @ZoeSaldana, Sam Worthington, Kate Winslet, and Cliff Curtis taking a break from underwater performance capture for a quick photo!Fun fact: Much of the performance capture took place in this 900,000 gallon tank, built specifically for the sequels. pic.twitter.com/NSfqoZ6jXJMay 13, 2020

There are also surprise returns for Sigourney Weaver and Stephen Lang, whose characters Grace Augustine and General Quaritch both died in the first movie. Cameron confirmed to Entertainment Weekly way back in 2014 that Weaver is coming back as “a different and in many ways more challenging character” – it seems reasonable to assume Grace’s return may have something to do with her consciousness passing into the Tree of Souls.

Grizzled soldier Quaritch, meanwhile, seems set to be a key antagonist in the four new movies. “I’m not going to say exactly how we’re bringing him back,” Cameron told Deadline in 2013, “but it’s a science fiction story after all. His character will evolve into really unexpected places across the arc of the new three-film saga.” It’s worth bearing in mind this quote is from almost seven years ago (it’s now a four-film saga), and you never know what might’ve changed in the meantime.

Avatar 2 is made with underwater mo-cap technology

From The Abyss to Terminator 2, Titanic to Avatar, a new James Cameron movie usually pushes the envelope when it comes to cinematic ambition. Expect Avatar 2 to be no different, as Cameron will undoubtedly be creating visuals unlike anything we’ve seen on screen before.

One of the key developments will be world-first underwater performance capture technology. “The problem with water is not the underwater part, but the interface between the air and the water, which forms a moving mirror,” Cameron told Collider. “That moving mirror reflects all the dots and markers, and it creates a bunch of false markers. It’s a little bit like a fighter plane dumping a bunch of chaff to confuse the radar system of a missile. It creates thousands of false targets, so we’ve had to figure out how to get around that problem, which we did.”

Cameron also wants to revolutionize the 3D experience in cinemas again, and it’ll be particularly interesting to see how he fares here. Avatar’s 3D visuals (arguably still yet to be bettered) kickstarted new levels of interest in stereoscopic projection, and for several years in the wake of its release, multiplexes were dominated by 3D screenings of blockbusters.

Cinemagoers’ interest has subsequently waned – a change Cameron has blamed on Hollywood’s preference for converting 2D-shot movies into 3D in post-production, rather than using actual stereoscopic cameras – but in an appearance at the Vivid light festival in Sydney (reported by Movieweb), he said the Avatar sequels “will be, to the best of my ability, the best 3D that [it’s] possible to make.”

Will the world still care about Avatar?

2009 was a long time ago. Over a decade has passed since Avatar first hit cinema screens, and 3D has largely drifted into memory as a fad. But people’s fascination with Pandora shouldn’t be counted out – they still want to be shown something they’ve never seen in a movie theater before, and Cameron is determined to provide that experience for his audience. We can’t wait to see what he comes up with.