Disney Plus UK: how to sign up, 2020 movies, Hamilton and more explained 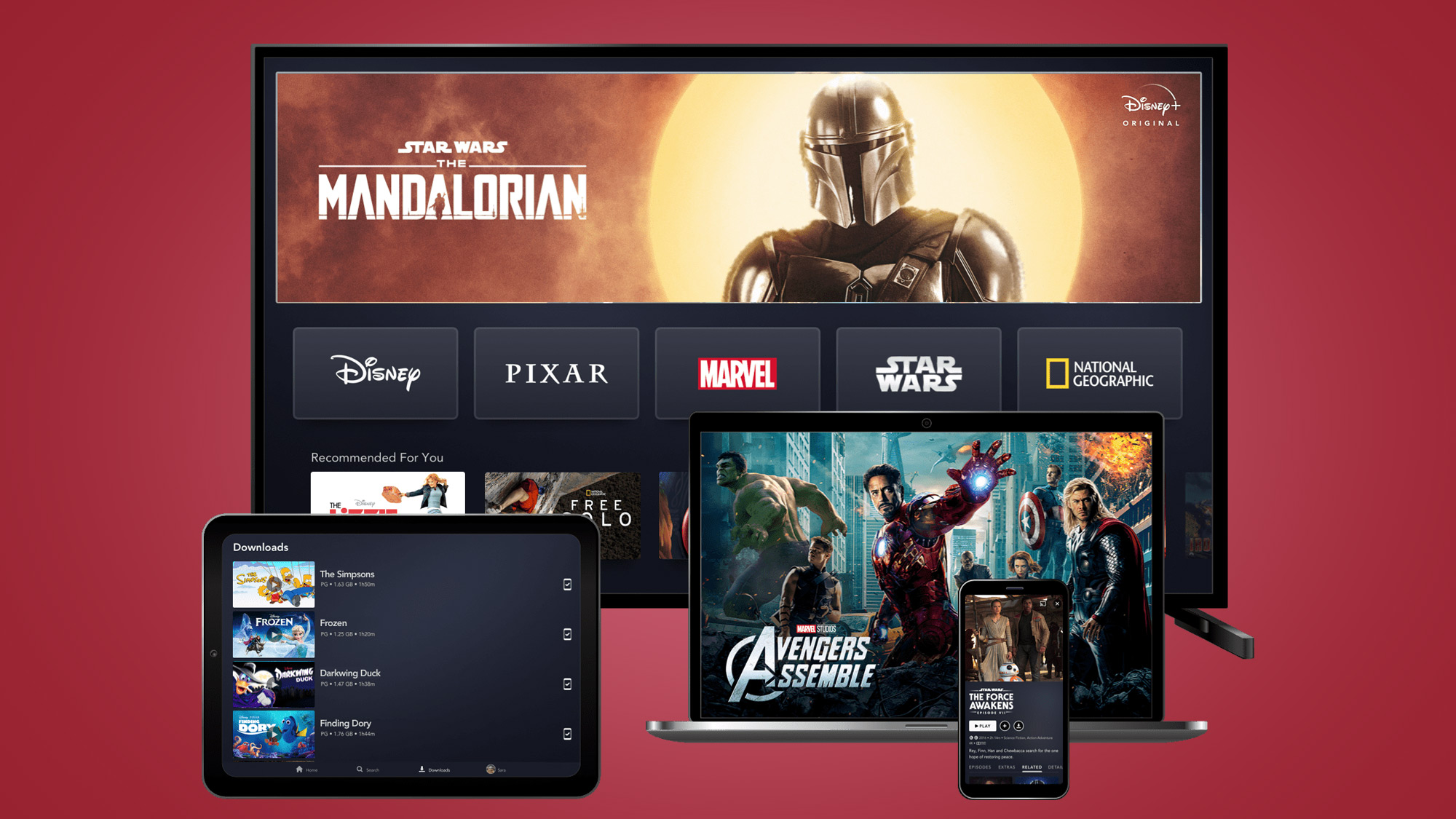 Disney Plus (or Disney+) is the streaming service from the House of Mouse that will battle the likes of Netflix and Amazon Prime for subscribers. Disney Plus brings together movies and TV shows from Disney animation, Star Wars, Marvel, Pixar and National Geographic into one place, as well as key content from 20th Century Fox like The Simpsons.

Disney Plus is out now in the US, Canada, Australia, New Zealand, UK, and other European countries. A Japanese launch is coming in June, and Latin American countries will get Disney Plus later in 2020. The Disney Plus rollout will take up to two years to complete after its initial November 2019 release date, and eventually it’ll be available everywhere.

Why is Disney Plus worth subscribing to? The big appeal here is its vast archive of movies from Disney, Pixar, Marvel and Star Wars, which encompasses many of the most popular movies ever made. They’re all presented in 4K HDR for no extra cost, too. You pick a monthly or yearly subscription tier and that’s it: you’re ready to watch on the device of your choice.

The other reason you’ll want the Disney Plus streaming service is Disney Plus Originals. Starting with Star Wars TV show The Mandalorian, Disney has made a big commitment to creative TV series based on its most popular film franchises. That means that you’ll soon see TV shows set in the Marvel Cinematic Universe, like The Falcon and the Winter Soldier and WandaVision, as well as more Star Wars series, including The Mandalorian season 2.

In 2020, Disney has released movies on the service faster than expected to respond to the changes in our viewing habits, with Frozen 2 and Onward arriving early in the US. On July 3, the musical Hamilton will release on Disney Plus, brought forward from a 2021 theatrical release and available to stream at home, which is a major incentive to subscribe.

Here’s our comprehensive Disney Plus guide, including details on its free trial, price, movies, shows, bundles and the Verizon deal that gets you a year of Disney Plus for free.

Disney Plus free trial: how to get one

A Disney Plus 7-day free trial is a good way to check out the entire offering of the service. Hey, you could watch every single episode of The Mandalorian in that time and marathon the Marvel movies before quitting, if you really wanted to. You’ll need to enter your billing details to get a free Disney Plus trial, but it’s easy to cancel before you’re charged. You only get one free trial, so make it count.

Here’s how you cancel Disney Plus if you need it.

Disney Plus price and bundle explained

Disney Plus, notably, is cheaper than Netflix, which is $10.99 per month for its Standard Plan, and $14.99 for its 4K-equipped Premium tier. With Disney Plus, the flat fee gets you 4K HDR streams, .

So, about that Disney Plus bundle. It includes Disney Plus itself, Hulu (with ads) and ESPN+ for just $12.99 a month. That’s a great deal, with Hulu offering a wide range of adult-friendly shows and movies, while ESPN+ includes tons of sports content. This saves you around $5 per month, since Disney Plus costs $6.99 per month, Hulu costs $5.99 while ESPN+ is $4.99.

Disney Plus app and devices

These are the devices that are compatible with the Disney Plus app:

The Disney Plus app can be downloaded on almost any device, then, and you can watch it in web browsers on desktop, too. The Disney Plus app supports up to four simultaneous streams, ten registered devices and you can create seven profiles. Each profile can create its own Watch List. You can download as much Disney Plus content as you want to watch offline, as long as you sign in to the app online every 30 days.

The app has different age ratings for content, and you can choose to create a Kids Profile to remove the more adult-friendly content on there (The Simpsons, for example).

As well as having different content hubs for Disney, Pixar, Star Wars, Marvel and National Geographic, the Disney Plus app has curated content lists themed around different subjects. These hubs include the major franchises we just mentioned, but also themed sets of Simpsons episodes, or Disney divided into decades. It’s a nice way to find something to watch that’s not just driven by Netflix-style algorithms.

Disney Plus has had a big 2020 so far, releasing movies like Frozen 2, Star Wars: The Rise of Skywalker, Pixar’s Onward and Maleficent: Mistress of Evil on the service in the US. Its next big original is June 12’s Artemis Fowl, an adaptation of Eoin Colfer’s book originally destined for cinemas. Not that you can really call it a movie, but the musical Hamilton arrives shortly after on July 3, and that’ll be a huge deal.

These are the major movies coming to Disney Plus in the US throughout 2020 and 2021 that we know about right now:

Disney Plus includes pretty much every Disney animated movie you can remember from across the decades: Snow White, 101 Dalmations, Aladdin, The Little Mermaid. There’s more or less parity in the library across different countries, though depending on where you are, some movies may be tied up in deals with other services and will arrive on Disney Plus later. We’ve listed the main examples of this above.

Disney Plus also has an almost-complete archive of Pixar movies to watch, as well as every Star Wars movie (minus Solo in the US, for the time being), and that now includes 2019’s The Rise of Skywalker.

Every single Marvel Cinematic Universe movie is on Disney Plus, except those that are owned by other studios (the two Tom Holland Spider-Man movies and The Incredible Hulk). In addition, Disney Plus US is missing two Marvel movies: Ant-Man and the Wasp and Avengers: Infinity War, but that will soon be rectified.

Existing original movies on Disney Plus include The Lady and the Tramp, Noelle and Timmy Failure. You can watch those now.

You’ll also find a number of movies from 20th Century Fox available to stream on Disney Plus, including James Cameron’s Avatar, The Simpsons Movie, the Home Alone series and Cheaper by the Dozen.

Current Disney Plus originals include Star Wars TV series The Mandalorian and The Clone Wars, which are by far the best reasons to subscribe. A recent series called Disney Gallery: The Mandalorian explores the making of the Baby Yoda-starring show.

Other originals include the excellent documentary series The Imagineering Story, and kid-friendly shows like Diary of a Future President, Zenimation, High School Musical: The Series and the Pixar shorts series Forky Asks A Question.

Disney Plus has a lot of non-fiction shows available to watch, like Shop Class, Marvel’s Hero Project, The Big Fib, Disney Family Sundays and Disney Fairy Tale Weddings. As you might expect, a lot of its programming is targeted at families.

In terms of classic shows, Disney Plus offers a lesser array of older series compared to its movie collection. What’s here is mostly animated, like DuckTales, Recess, Gargoyles, Gummi Bears, Goof Troop, TaleSpin and several Marvel series, including the ’90s X-Men and Spider-Man animated series. The big hitter, of course, is The Simpsons. There are 30 seasons to stream now, as well as The Simpsons Movie. You’ll find some other live-action shows to enjoy, too, like Marvel’s Runaways and Boy Meets World.

But what about the future?

The reason to be excited about the future of Disney Plus is its upcoming originals, a big-budget array of new Disney Plus shows that put the characters of Disney, Pixar, Marvel and Star Wars to work. The highlights for most adult viewers will be the upcoming canonical Marvel Cinematic Universe shows featuring characters from the movies, as well as new live-action Star Wars shows focused on popular heroes like Obi-Wan Kenobi and Cassian Andor.

Below is a selection of the best upcoming shows on Disney Plus. We’ve excluded most non-fiction shows or game shows from the list, because there are so many in the works, and what’s below is the stuff you’ll actually be interested in. Note that some of these dates may be affected by the current global pandemic, but it’s accurate at the time of publication:

Disney Plus error codes: what the numbers mean

Check out our list of Disney Plus error codes for more on what the different numbers mean. If you’re having issues with Disney Plus you can’t seem to solve, try the Disney Plus help center for more.

This is how you contact Disney Plus customer service, too, if you can’t resolve an issue. You can call 888-905-7888 if you’re based in the US. You can also tweet the Disney Plus help account. This email should help, as well: DisneyPlusHelp@Disney.com.

Disney Plus Verizon deal: how you can get a year of Disney Plus for free

Disney Plus and Verizon are still offering a year of Disney Plus for new Fios and 5G Home customers (click here to see the deal). You can still take advantage of the offer even if you’re subscribed to Disney Plus already, according to Verizon’s FAQs.

The Disney+ on us offer is only for new Fios and 5G Home customers. Business accounts are not eligible.

Disney Plus gift subscriptions: get a year of Disney Plus for a friend or family member

Our verdict? Disney Plus is worth it, but mostly if you have kids

Disney Plus is slightly a more specialist offering than Netflix, aimed at fans of Disney, Marvel and Star Wars. It doesn’t have the adult content or variety you’ll find on other streaming services, but that’s okay, because inevitably you’ll find something you want to watch on here.

The archive of Disney Plus content is amazing, and for Disney fans, that’s reason enough to subscribe. If you’ve got children, too, the service is more of a no-brainer.

The next year will be crucial for Disney Plus. Its initial offering of original shows has been solid, but slow, with many of its best series coming long after launch. In a few years, though, with a regular rotation of Star Wars and Marvel shows to enjoy every few months, subscribing is going to be essential.