George Floyd and the Illusion of Progress 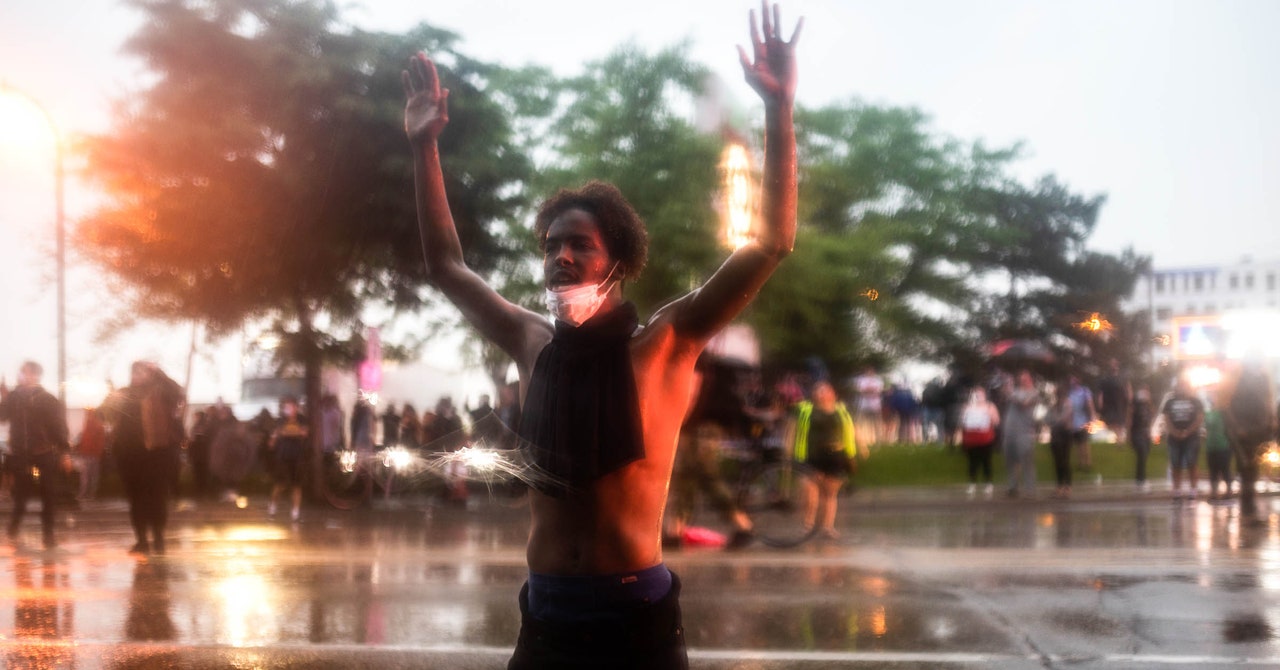 Images place us in time, gluing unremarkable and historically urgent moments in a fixed setting or context, but mostly they thrill our senses in other varied ways. They challenge us with questions and ferry nostalgia. Images set our faces electric at the sight of something truly wonderful. The primary function of a photograph is not measurement, but there are those that suggest it all the same. Those images, thornier in intent and unwedded to a single place, become a kind of cloverleaf—of circumstances, of timelines and beliefs, of people.

Photographer Stephen Maturen’s snapshot of a young black protester—on his knees and shirtless, hands raised like a goal post—is such an image. It was taken outside the 3rd Police Precinct in Minneapolis, Minnesota, where thousands gathered this week in response to the killing of 46-year-old George Floyd, who died in police custody Monday. The details of Floyd’s death are not so much an uncanny occurrence as they are an American one. Absent all exaggeration, he died, quite literally, with a knee drilled into his neck, pinned to the pavement for some seven minutes as he fought for air. “Please, please, please,” he told officer Derek Chauvin, “I can’t breathe.” The state chose not to listen.

None of this is unexpected—the illogical death of Floyd, Chauvin’s malevolent disregard for black life. An investigation by the Marshall Project revealed that recent police reform efforts in Minnesota have failed spectacularly, detailing that “even as officials have made some changes, law enforcement agencies have lacked either the authority or the will to discipline and remove bad officers from patrol.” Chauvin was one such officer.

The initial police report, which has since been disputed, said Floyd appeared to be “suffering medical distress,” but a video uploaded to Facebook revealed the actual terror at hand, the means with which black people are stalked, apprehended, and made lifeless. “I’m about to die,” Floyd yells in the video, his face slapped against the ground. Only when the ambulance arrives does Chauvin release pressure, but it is too late; Floyd’s body is inanimate by that point. (Chauvin, along with the three other officers involved in the incident, have since been fired by the department. On Friday, Chauvin was charged with third-degree murder and manslaughter.)

For so long, the assurance of black death has been a loud and unbroken current in US democracy. I am writing this the week that Tony McDade, a black trans man, was fatally shot by police in Tallahassee. I am writing this weeks after Breonna Taylor, a black EMT, was shot at least eight times by Louisville law enforcement in her apartment. I am writing this months after Ahmaud Arbery was hunted and killed by the McMichaels, a white father and son, in Georgia. (The pair now face murder and aggrevated assult charges.) Six years ago during the peak of July, Eric Garner shouted the same haunting arrangement of words that George Floyd chose, which again rattle the mind, our now unholy inauguration to summer.

What draws the viewer into Maturen’s photograph are all of these tragedies. Protests intensified in the days following its original capture—by Thursday night the same police station the young man kneels in front of was in flames, and the president promised retaliation over Twitter, threatening: “When the looting starts, the shooting starts.” And what it suggests is a difficult intersection of truth.

I see a friend, possibly a brother, not looking for self-validation but fighting for the very thing he was never promised: justice. In this way, the context of the photo is not solely of this moment; it moves alongside time. The slipperiness of the image’s background helps lend it a transportive quality. Even as the young man kneels in place, he could be anywhere: a Sunday in 1965 in Selma, Los Angeles in 1992, the streets of Baltimore during the spring of 2015. For me, the main function of Maturen’s photograph is not measurement but naked documentation. In this photo I witness outrage, grace, and courage. It is the look of someone tired of having a knee on his neck. And yet, what the photograph does measure is its most telling, horrifying attribute. It exploits progress as fallacy. The image is an education in distance: We have not come very far. We have so far to go.