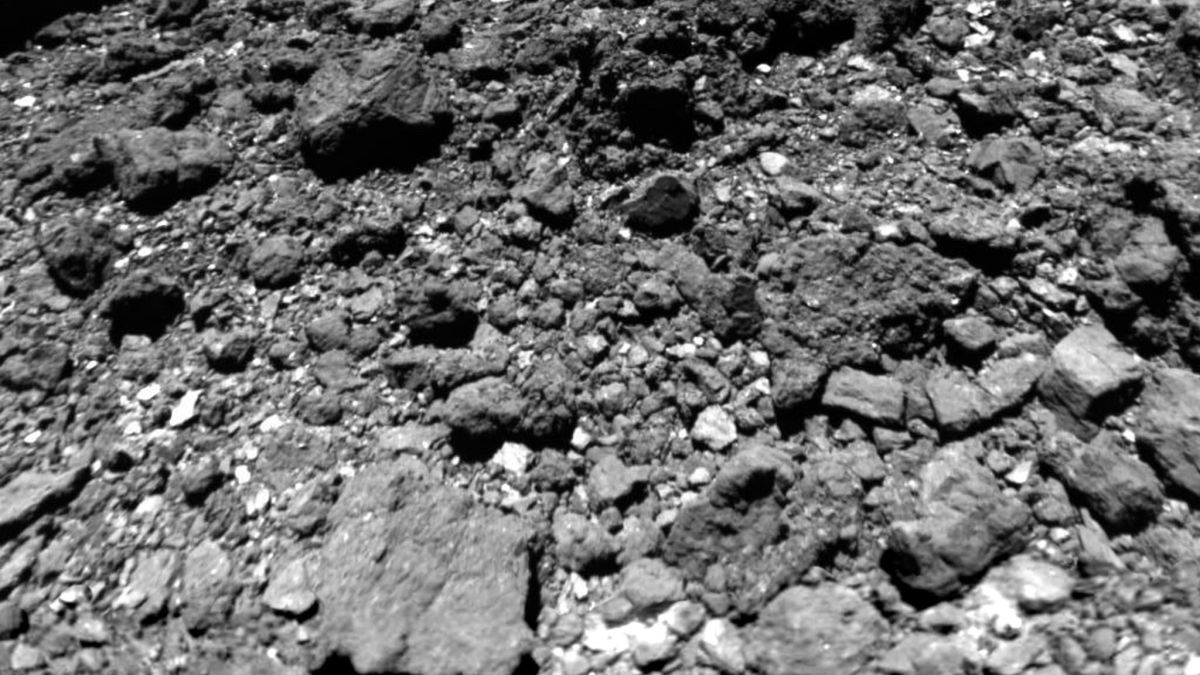 Hayabusa2 is heading home to Earth, but scientists continue to review data collected by the spacecraft during its visit to the Ryugu asteroid, including its brief moments on the surface. New images are providing an unprecedented look at this gigantic pile of rocks, as well as a potential explanation for its weird, two-tone surface.

Newly processed images show the surface of Ryugu at resolutions reaching 1 millimeter per pixel, according to new research published in Science. These unprecedented close-ups are allowing researchers to study the asteroid in detail, including the ways in which Hayabusa2’s touchdown affected the surface. Fascinatingly, the new study offers an explanation for the asteroid’s odd coloration: a short but intense stint near the Sun. This latest research was co-authored by Tomokatsu Morota from the Department of Earth and Planetary Science at the University of Tokyo.

The images were taken on February 21, 2019, when Hayabusa2 made the first of its two touchdowns. At the point of contact, the probe shot a projectile onto the surface, producing a debris field. The second touchdown happened on July 11, 2019, when the probe gathered material from further below the surface. A special container (hopefully) scooped up some of these rocks and dust, which are currently en route to Earth. Hayabusa2, a mission run by the Japanese Space Agency (JAXA), is expected to return home with its cargo in December 2020.

Ryugu is around 300 million kilometers (186 million miles) from Earth and measures 870 meters (2,854 feet) in diameter. The asteroid is shaped like a spinning top, and it’s basically a rubble pile. As the researchers point out in the new paper, Ryugu formed from an ancient impact that caused it to disintegrate into smaller bits, which have re-formed into a singular, yet loose, structure.

Hayabusa2’s cameras captured the landing site and surrounding area in fantastic detail, in which many rocks and pebbles are visible. Scientists can now determine the age of this carbon-rich asteroid and better characterize its geological history.

One of the more enigmatic aspects of Ryugu has to do with two different types of surface material, one that gives off a reddish hue at the asteroid’s mid-latitude regions and the other a bluish appearance along its equatorial edge and polar regions. The asteroid’s boulders tend to be blue, while the fine-grained materials around them are red. Craters with blue surface material tend to be younger than craters with red materials. The reason for these polka-dotted features and the asteroid’s varied color palette has eluded scientists.

In a happy accident, Hayabusa2 managed to capture before-and-after pics of the surface, showing the landing area as it was prior to the projectile strike and also after. The new study describes how the landing kicked up a coating of dark, fine-grained material, which happens to correspond with the asteroid’s redder sections. A comparison of these materials had led to an interesting new theory.

“We suggest that a surface reddening event within a short period of time could be explained if Ryugu underwent a temporary orbital excursion near the Sun, causing higher surface heating,” wrote the researchers in the study.

As for when the reddening event happened, that’s not entirely clear. Using models to estimate the frequency of collisions over time, the authors presented two possibilities, depending on the asteroid’s orbital history and time spent in its birthplace—the main asteroid belt between Mars and Jupiter.

“After the surface reddening event, the redder materials were disrupted and redistributed by impacts, thermal fatigue, and mass wasting [slope movement] from the equator to mid-latitude regions,” wrote the authors. “A layer of mixed red and blue material subsequently formed on Ryugu’s surface.”

If the asteroid failed to leave its cradle, the surface reddening could’ve happened 300,000 years ago, but if it strayed away from the main belt, the reddening dates as far back as 8.5 million years ago, according to the research. Ryugu itself is estimated to be 9 million years old.

Another possibility considered by the researchers is space weathering, which can also cause the surface to redden. But this was ruled out by the researchers, because space weathering typically affects a thin layer of around 100 nanometers. Solar heating, on the other hand, can penetrate the surface for tens of centimeters, which matches the depth of red materials on Ryugu.

A cool part of this mission is that Hayabusa2 will return to Earth with a mixture of both blue and red materials, assuming the sample collection was successful, allowing the scientists to explore all these possibilities further.

Mini wind turbines. Make a style statement – this mens distressed leather jacket is a versatile fashion choice you can wear on any occasion. However, you shouldn’t be paying a ridiculously high amount for an average meal.