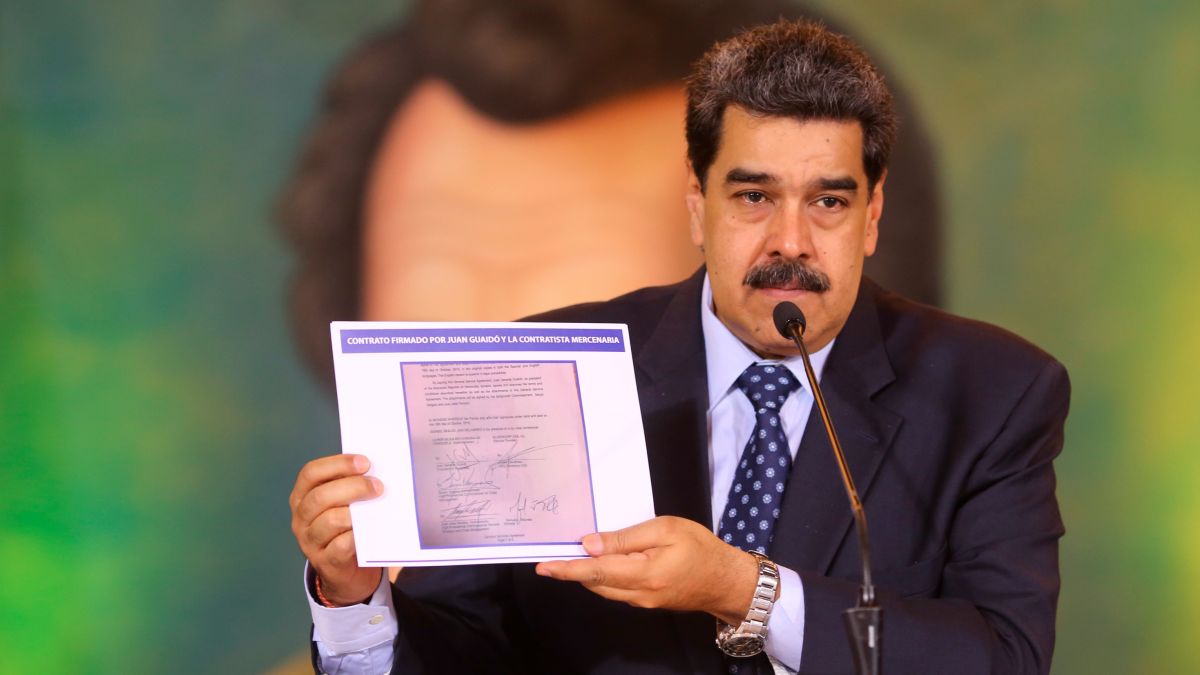 A U.S. private military contractor with a plagiarized website and unclear connections to Trump’s White House recently attempted to invade Venezuela and depose its authoritarian leader Nicolas Maduro and replace him with a U.S.-backed puppet government this month—leading to predictably disastrous results. In the aftermath, the record of incompetence involved in this story has only grown larger.

According to an Associated Press article published on May 1st, Florida-based Silvercorp USA and its ex-Army special forces founder Jordan Goudreau had been working with former Venezuelan general and military deserter Cliver Alcalá to launch a strike on Caracas using hundreds of disgruntled soldiers that had fled to Colombia. Goudreau and Alcalá had been in contact with Juan Guaidó, the U.S.-backed opposition leader who declared himself the president of Venezuela with the backing of the National Assembly and launched an unsuccessful coup in April 2019, though Guaidó denied involvement in any contract related to the plot to the AP.

Three sources told the news agency Guaidó and his aides had broken off discussions after it became clear Silvercorp’s plan was a suicide mission. Alcalá has separately turned himself in to U.S. authorities on separate charges of drug trafficking, part of a broader U.S. campaign to tie the country’s leadership to narco-terrorism.

Goudreau claimed that he had high-level connections to Donald Trump’s White House and that those people would support the invasion, though the AP reported that he gave few details to other plotters. Alcalá has additionally claimed ownership of a weapons shipment allegedly arranged by Goudreau.

Despite the fact that their cover had been blown—both by Venezuelan military forces and the May 1 AP article—Goudreau’s plot moved forward on the morning of May 3, according to Bellingcat. At that time, military or law enforcement ships and a helicopter were sighted off the coast of Macuto north of Caracas, accompanied by the sounds of gunfire. Local media reported that at least eight would-be coup plotters died. Another pair was arrested trying to land in Puerto Cruz with a cache of equipment, seemingly including an Airsoft rifle. Among the waves of arrests were two U.S. military veterans, one of whom appears to be a devotee of Qanon, a rabidly pro-Trump conspiracy theory.

The credibility of the current Venezuelan government may be questionable, but the U.S.’s fondness for thuggish, illegal “intervention” in Latin America is a matter of historical record. The Trump administration has also selected Venezuela for particular antagonism, targeting it with sanctions that have failed to depose Maduro but contributed to immense suffering across the country. Goudreau cast aside all skepticism that Maduro’s government was making the whole incident up by releasing a video, accompanied by a man identified as Javier Quintero Nieto, in which he said the intent of the operation was to detain the president and his top aides and free political prisoners. Documents show the mercenary outfit also had schemes to seize oil facilities, as well as attack security forces, pro-Maduro socialist paramilitary organizations called colectivos, and various guerilla forces operating throughout Venezuela.

The same outlet that shared the above video also shared images of a purported contract between Goudreau, Guaidó, Miami-based political consultant J.J. Rendón, and Sergio Vergara, another opposition official. The contract, large portions of which were published in full by the Washington Post, establishes fees in the hundreds of millions backed by Venezuelan oil money for Silvercorp and other parties involved to “advise and assist… in planning and executing an operation to capture/detain/remove Nicolas Maduro (hereafter ‘Primary Objective’), remove the current Regime, and install the recognized Venezuelan President Juan Guaido.”

Silvercorp may have been wildly unsuccessful in seizing power in Venezuela, but it did manage to appropriate large amounts of text from random websites. Twitter users discovered that much of the copy on the Silvercorp USA web site had been plagiarized from a diverse array of sources including public relations and affairs consultancy Tucker Hall, Asymmetric Solutions USA, the Department of Homeland Security, MasterClass, and life coach Tony Robbins.

Additionally, military rules of engagement agreed upon in the contract appear to have been copied verbatim from a 2015 U.S. military document governing use of force in Iraq that was previously published by WikiLeaks. One section stripped out from the original consisted of rules concerning the use of force in or around mosques, though whoever wrote it apparently forgot to remove a passage referring to numerous Islamic extremist groups that have no, or at most extremely tenuous, connections to Venezuela.

The plan as described is transparently ridiculous and its objectives unachievable unless a larger force (say, the U.S. military) stepped in to provide the necessary manpower. Plotters also allegedly discussed paying for Goudreau’s services in the form of 14 percent of the illicit riches stored by Maduro and his inner circle in warehouses. That stockpile may or may not exist, though the mercenaries were apparently willing to roll the dice.

Rendón told the Washington Post that the contract is real, but both he and Guaidó disputed to the paper that the aspiring president had actually signed anything. The version published by the paper does not have Guaidó’s signature. Instead, Rendón said, Guaidó was only aware of an “exploratory plan” and discussions had fallen apart as Goudreau failed to provide financial backing, show evidence of 800 trained soldiers, and demanded a $1.5 million retainer.

Goudreau, for his part, showed the Post a recording of a phone call in which Guaidó commented: “We are doing the right thing for our country […] I’m about to sign.” According to the AP, however, Goudreau did not actually mention a military assault on Venezuela in the recording.

Silvercorp’s claims to U.S. support apparently relied, in part, on its past work as security at Trump rallies, which is backed by photographic and video evidence, and the White House has offered a total of $55 million in reward money for information leading to the arrest of Maduro and four top aides. The Trump administration has distanced itself from Silvercorp’s operation and said it would not comment at this time as to who bankrolled it. Secretary of State Mike Pompeo told reporters, “If we’d have been involved, it would have gone differently… As for who bankrolled it, we’re not prepared to share any more information about what we know took place. We’ll unpack that at an appropriate time.”

The AP reported that Goudreau had also shopped his plan around to Colombian intelligence agencies, which quickly discovered his claims to be a CIA agent were lies. It also wrote that Roen Kraft, who is a member of the cheese dynasty of that same name, had tried to lure his friends to invest in Silvercorp’s “private coup” with promises that Guaidó would reward them with corrupt mining and energy deals.

Goudreau claims the operation is ongoing, and a Twitter account with the handle @Carive15 purports to be giving live updates on how it is going. Goudreau is reportedly now under investigation for weapons smuggling.

“Given his focus on capturing Maduro, it seems quite possible that Goudreau was motivated in part by the $15 million bounty on Maduro, as well as the bounties on other senior Venezuelan government officials,” Alex Main, director of International Policy at the Center for Economic and Policy Research, told the Daily Beast. He added that it was possible Silvercorp was still convinced their operation might still succeed and lead to a sizable reward by Guaidó.

“The U.S. government was probably directly aware of the ongoing plans to mount another armed attack from Colombia,” Main added, noting that if either the U.S. or Colombian governments were aware of the plot, they could have easily terminated the operation before it went forward.