Hospital staff is hungry. Restaurants are struggling. You can help both 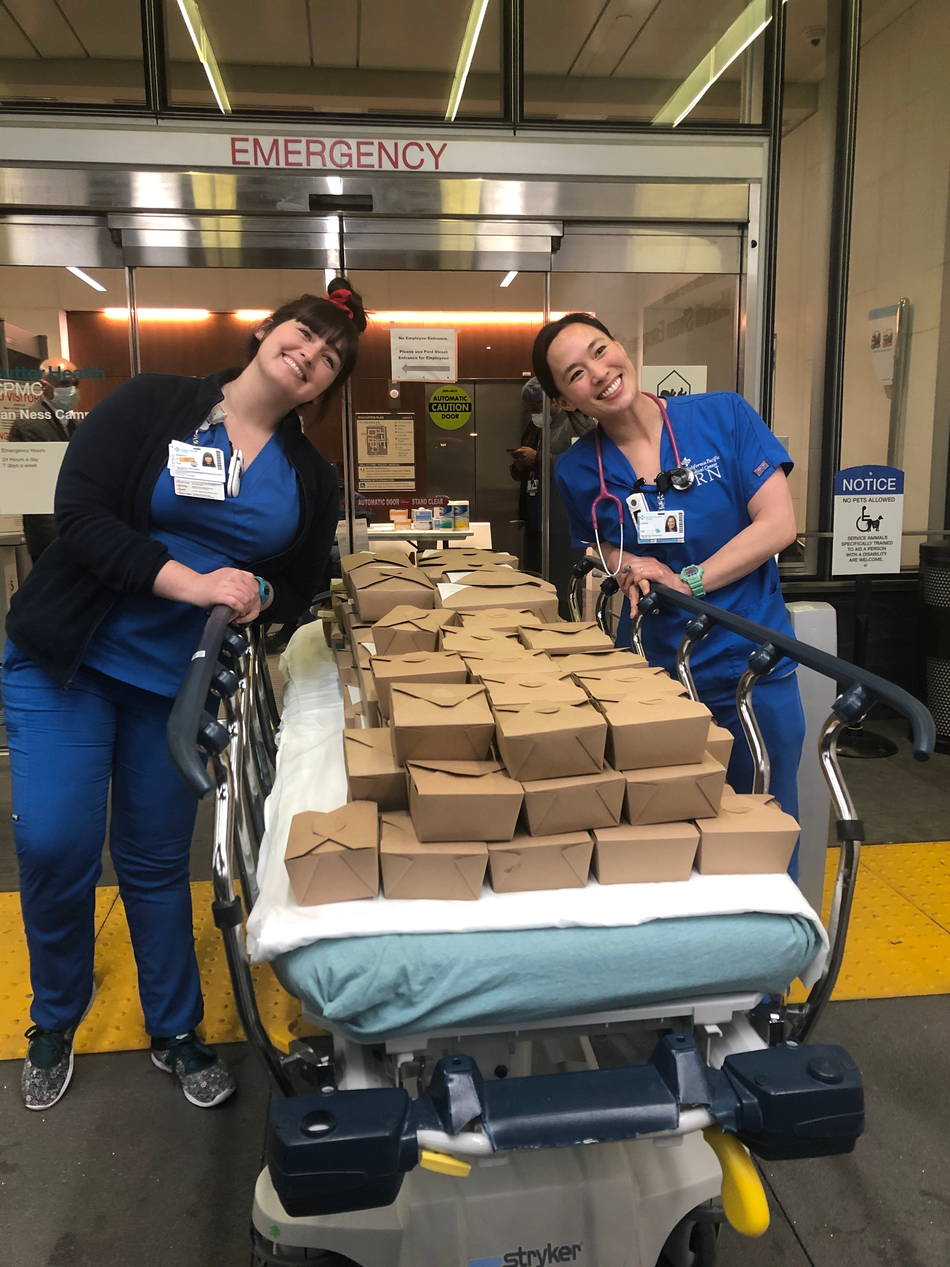 All Sydney Gressel wanted was some pizza.

It was March 12, a few days before San Francisco issued its stay-at-home order mandating that all restaurants could only stay open for takeout and delivery. While restaurants, food trucks, and grocery stores are all within walking distance of UCSF Medical Center at Mission Bay in San Francisco where Gressel works as a pediatric nurse in the emergency department, she says at the time, the hospital was inundated with people. Her and her coworkers rarely had time to run out for food.

On that day, Gressel’s friend Frank Barbieri asked how he could help. Gressel suggested Barbieri throw her and her coworkers a pizza party as a morale booster. Barbieri teamed up with his friend Ryan Sarver, who worked in the restaurant industry and knew it was suffering. (The pandemic would take a toll on the industry in the days, weeks, and months ahead). Some Bay Area restaurants had already starting closing.

Sarver connected with a local pizza restaurant, which delivered pizzas to 30 hungry doctors and nurses at UCSF that night, paid for by Sarver and Barbieri. The restaurant hadn’t had any other business that day.

Both Sarver and Barbieri realized their act of kindness had big potential. They could pay struggling restaurants while feeding an entire ecosystem of hungry hospital workers on the frontlines, including nurses, doctors, front desk employees, cleaners, and more.

The realization came at the right time, too: On March 17, San Francisco’s stay-at-home order went into  effect. Cities and states across the country would soon follow suit.

Others wanted to help. In two days, after Sarver asked for donations, donors pledged $200,000. Not long after, Frontline Foods (originally named SFHospitalMeals) was born.

A few of us have gotten together to support ER/ICU staff on the frontlines of #COVID19 w hot dinners while also helping our local restaurants who are facing unprecedented times.

Now we need people who can donate money for the meals. Learn more & sign up: https://t.co/rrdpM2vuN4

The organization grew from there. On March 19, Joel Wishkovsky, founder and chairman of the online birth control prescription and delivery platform Simple Health, and organizer of a similar effort in New York City, created a GoFundMe page to expand Frontline Foods to NYC. In doing so, he became the fourth founding organizer, alongside Sarver, Barbieri, and Gressel.

In just a few months, Frontline Foods has grown tremendously — despite ever-growing challenges for restaurants  and hospitals posed by coronavirus. It has about 700 volunteers, and works with 350 hospitals in 56 cities across the country.

Gressel feels the coronavirus squeeze on her daily life. She doesn’t have time to wait in long grocery store lines before her shifts start. She minimizes her trips out in public as her job puts her at higher risk of infecting people with COVID-19. She also can’t get a quick bite at restaurants as many are closed (some permanently). While she uses grocery store delivery apps when she can, she says it can take a week or two to get food given high demand.

“We’re just busy in a different kind of way because of not having childcare, because of the long hours, because of just how much more difficult it has become to just get food,” explains Gressel, who has two young children.

The way Frontline Foods works to get food to people like Gressel can vary by location, as each community has different people running the process. Across the country, though, volunteers do most of the work. It also tries to prioritize hospitals that are already triaging COVID-19 patients and dealing with a high demand in their emergency departments and intensive care units. It then acts as a liaison, connecting the hospitals to the restaurants, which safely pack up the food for delivery. Though meal costs vary, $100 can feed a team of five to 10 frontline workers.

One hundred percent of donations goes to feeding frontline workers, and they can be directed towards the national effort or to specific cities or states. Right now, Frontline Foods doesn’t have the capability to earmark money to a specific hospital or restaurant.

While Frontline Foods’ built-in community in San Francisco made it easier to assess which hospitals and restaurants to reach out to when it first began, it struggled when expanding to other cities. That’s where World Central Kitchen came in. The organization, started by celebrity chef José Andrés, provides meals to communities around the world hit by both natural and human-caused disasters. It helped connect Frontline Foods to local networks and information like which restaurants are still open in cities like Atlanta, Chicago, Miami, and New Orleans.

The partnership also got them attention from celebrities, which Sarver says wouldn’t have been possible without World Central Kitchen’s widespread recognizability. Recently for example, Octavia Spencer, Melissa McCarthy, Ben Falcone, and Joel McHale spread the word about the organization on the Today show. And at the end of April, Kerry Washington and some of her former Scandal co-stars sponsored meals through Frontline Foods that went to a Chicago hospital.

The idea to pour money into the ailing restaurant industry to feed frontline workers battling COVID-19 isn’t unique to Frontline Foods. Take Feed the Fearless, which began shortly after Frontline Foods did and provides meals for hospital workers in Oregon and Vancouver, Washington. Then there’s Off Their Plate, which started in Boston and has since expanded to eight more cities around the country. Off Their Plate has also partnered with World Central Kitchen.

As of Friday, Frontline Foods has raised $5.3 million through donations from the public and corporate sponsorships, delivered 350,000 meals, and partnered with 920 restaurants across the country. Sarver ties this success and expansive reach to its volunteers, who quickly grew its team.

“We don’t have any monopoly on this idea… I think what’s been unique about our approach, is the scale and the federation of it,” says Sarver. That “federation” means if someone wants to start a Frontline Foods’ chapter in their community, the organization provides the tools to get started and the new chapter can take over from there.

“I think the power of that clear mission to save our restaurants and feed the people in need just brings people together in a way that is egoless,” says Sarver.

Frontline Foods expects to continue serving  frontline workers who don’t work in hospitals, like EMS workers, and to continue growing across the country.

“We’ve started in hospitals but we recognize that the frontline expands beyond the hospital and the frontline will continue to shift as the crisis shifts,” says Gressel.