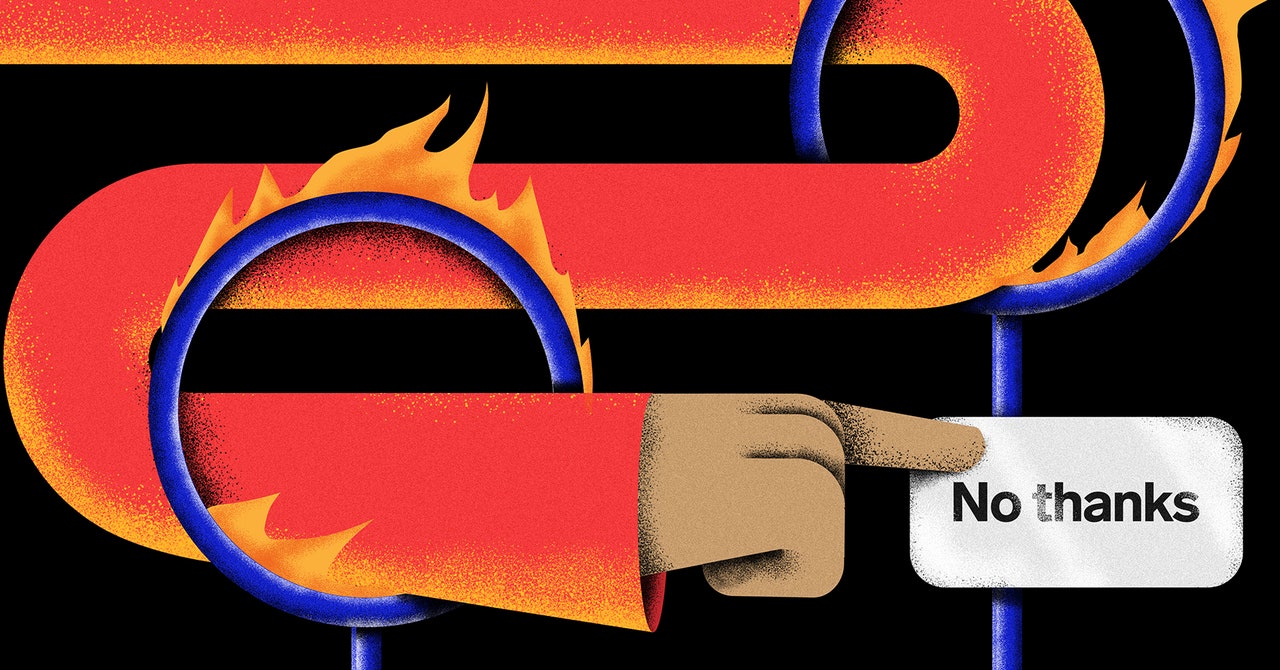 Recently, sites like Facebook and Twitter have begun to give their users more fine-grained control of their privacy on the website. Facebook’s newly rolled out Privacy Checkup, for instance, guides you through a series of choices with brightly colored illustrations. But Gray notes that the defaults are often set with less privacy in mind, and the many different checkboxes can have the effect of overwhelming users. “If you have a hundred checkboxes to check, who’s going to do that,” he says.

Last year, US senators Mark Warner and Deb Fischer introduced a bill that would ban these kinds of “manipulative user interfaces.” The Deceptive Experiences to Online Users Reduction Act— DETOUR for short—would make it illegal for websites like Facebook to use dark patterns when it relates to personal data. “Misleading prompts to just click the ‘OK’ button can often transfer your contacts, messages, browsing activity, photos, or location information without you even realizing it,” Senator Fischer wrote when the bill was introduced. “Our bipartisan legislation seeks to curb the use of these dishonest interfaces and increase trust online.”

The problem is that it becomes very difficult to define a dark pattern. “All design has a level of persuasion to it,” says Victor Yocco, the author of Design for the Mind: Seven Psychological Principles of Persuasive Design. By definition, design encourages someone to use a product in a particular way, which isn’t inherently bad. The difference, Yocco says, is “if you’re designing to trick people, you’re an asshole.”

Gray has also run into difficulty drawing the line between dark patterns and plain bad design.

“It’s an open question,” he says. “Are they defined by the designer’s intent, or the perception in use?” In a recent paper, Gray looked at how people on the subreddit r/AssholeDesign make ethical calculations of design choices. The examples on that subreddit range from the innocuous (automatic updates on Windows software) to the truly evil (an ad on Snapchat that makes it look like a hair has fallen on your screen, forcing you to swipe up). After combing through the examples, Gray created a framework that defines “asshole design” as one that takes away user choice, controls the task flow, or entraps users into a decision that benefits not them, but the company. Asshole designers also use strategies like misrepresentation, nickel-and-diming, two-faced interactions—like advertising an ad blocker that also contains ads.

Many of these dark patterns are used to juice metrics that indicate success, like user growth or time spent. Gray cites an example from the smartphone app Trivia Crack, which nags its users to play another game every two to three hours. Those kinds of spammy notifications have been used by social media platforms for years to induce the kind of FOMO that keeps you hooked. “We know if we give people things like swiping or status updates, it’s more likely that people will come back and see it again and again,” says Yocco. “That can lead to compulsive behaviors.”

The darkest patterns of all arise when people try to leave these platforms. Try to deactivate your Instagram account and you’ll find it’s exceptionally hard. First, you can’t even do it from the app. From the desktop version of the site, the setting is buried inside of “Edit Profile” and comes with a series of interstitials. (Why are you disabling? Too distracting? Here, try turning off notifications. Just need a break? Consider logging out instead.)

“It’s putting friction in the way of attaining your goal, to make it harder for you to follow through,” says Nathalie Nahai, the author of Webs of Influence: The Psychology of Online Persuasion. Years ago, when Nahai deleted her Facebook account, she found a similar set of manipulative strategies. “They used the relationships and connections I had to say, ‘Are you sure you want to quit? If you leave, you won’t get updates from this person,’” and then displayed the pictures of some of her close friends. “They’re using this language which is, in my mind, coercion,” she says. “They make it psychologically painful for you to leave.”