How to watch Solar Opposites online: stream the ‘new Rick and Morty’ from anywhere 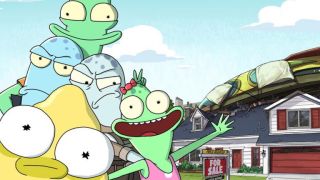 If the name Justin Roiland rings a bell, that’s probably because he’s one-half of the creative duo behind Rick and Morty – the madcap adult cartoon that’s taken the world by storm since it first aired back in 2013. But as well as continuing to work on R&M, Roiland also has a new project to treat us to – an equally hilarious, equally bizarre new animation launching at what could be the perfect time. Here’s how to watch Solar Opposites online and stream every for free from anywhere today.

Solar Opposites is a Hulu exclusive and all episodes will drop at once on Friday, May 8. Hulu releases typically take place in the small hours of the morning, so we’d expect it to be available to stream when you wake up – grab a free 30-day Hulu trial and it won’t cost you a penny!

Perfect time, you say? Well, that’s because the release of Solar Opposites coincides with people finally getting to watch Rick and Morty season 4 – and more specifically, the ‘part 2’ episodes viewers had been promised since last year.

Yet while it complements Rick and Morty in some ways, Solar Opposites is very much its own beast. The new show follows a family of alien refugees, recently displaced from their Utopian planet and relocated to middle America. Yep, you get an ample side of topical social commentary with your all-you-can-eat lulz buffet here, folks.

And if things look overly familiar to Rick and Morty fans, it’s not just because of the occasional use of gratuitous cartoon violence – it’s also because creator Roiland voices some of his creations in both shows. In the case of Solar Opposite, he’s the actor behind one of the main characters, Korvo.

So without further ado, here’s how to watch Solar Opposites online and stream every episode wherever you are today.

How to watch Solar Opposites for FREE in the US

As we’ve said, Solar Opposites is a Hulu exclusive and that means the streaming service is the only place to watch the new Justin Roiland show right now.

Don’t think that restrictive, however – Hulu is great value with packages starting from just $5.99 a month, and better still, its FREE 30-day trial should give you more than enough time to watch every episode of Solar Opposites without paying a penny!

And anyone who lives in the US and subscribes to Hulu can always try out a VPN should they find themselves away from home – we’ll explain more below, but essential it’s a clever bit of software that allows you to access the streaming services and content you already use (and pay for!) at home – just from anywhere in the world.

How to watch Solar Opposites from outside your country

As we’ve said, anyone in the US will likely have found it relatively easy to watch Solar Opposites as soon as it’s released – provided they take advantage of Hulu’s FREE 30-day trial, of course.

For the rest of the world, it’s a case of wait and see. There isn’t a release date for Solar Opposites in places like the UK, Australia or Canada just yet – and geo-blocking restrictions stop you from accessing Hulu like you would if you resided in the US.

The only silver living here is for US residents who happen to be abroad, as they can use a piece of software called a VPN to access the content and services they normally would at home – just from abroad.

In many cases, these services require you to verify local credit card or cable subscription details before gaining access, so it’s always best to read the fine print first and make sure you have everything you need to hand if you’re abroad – lest you be left disappointed.

Once installed, select the location of your home country and simply click connect to watch Solar Opposites online from anywhere on the planet.

How much solar energy do we need?. Women cotton jacket. Events.