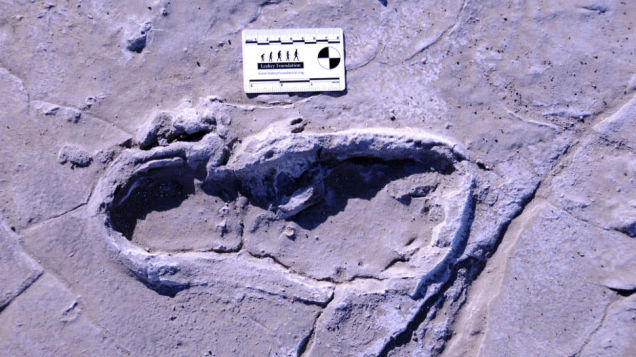 Over 400 fossilized human footprints have been discovered in Tanzania, representing the largest collection of human prints ever found in Africa. Dating back some 10,000 years, the footprints offer a snapshot of life during the Late Pleistocene, including possible divisions of labor based on sex.

New research published in Scientific Reports describes hundreds of fossilized human footprints found at the Engare Sero site in northern Tanzania. The researchers, led by archaeologist Kevin Hatala from Chatham University in Pittsburgh, weren’t able to provide a tight timeframe for the prints, offering a range between 19,100 and 5,760 years ago, but the prints were most likely laid down between 12,000 to 10,000 years ago, according to the study.

By analyzing the size of the footprints, the distances between steps, and the orientations of each print, the researchers could make out individual trackways. What’s more, these measures allowed them to infer walking speed, relative body size, and even the sex of individuals.

The new study is offering a glimpse into the movements and social behaviors of early modern humans living in Africa at the very tail end of the Late Pleistocene. In total, the prints were found to represent two different scenes, one involving 17 individuals and one involving an indeterminate number of people.

The Engare Sero site yielded 408 footprints, which now “represents the largest assemblage of footprints currently known from the human fossil record in Africa,” according to the study. That the archaeologists were able to discover and document so many prints is nothing short of remarkable.

“Footprints that are made in soft substrates are often wiped away by natural processes, but every now and then exceptional circumstances allow footprints to be preserved in the geological record,” Hatala told Gizmodo. “The Engare Sero footprints were created in a volcanic mudflow from a nearby volcano called Oldoinyo L’engai. The footprints were made while the volcanic ash was still wet, and when it dried, it hardened almost like concrete. After this happened, the surface was probably covered relatively quickly by other sediments. The hardened ash is very resilient, and it has preserved these footprints for thousands of years.”

To estimate sex and age of individuals, the scientists compared the sizes of footprints to the sizes of modern human feet (i.e. people living today). This is hardly a surefire way of determining sex, but scientists can calculate the probability of a foot or footprint belonging to a specific age or sex.

The episode involving 17 individuals likely consisted of 14 adult females, two adult males, and one young male. The group was moving together at a normal walking pace, headed in a southwest direction. That so many adult females were bunched together in a group was taken as possible evidence of a sex-based activity and divided labor roles. These adult females may have been foraging together and were either being visited or joined by the males, according to the authors. This behavior was not pulled from thin air, as similar behaviors have been documented in modern hunter gatherers living in Africa, such as the Ache and Hadza cultures.

“When we looked at comparative data from modern foraging groups, it seems relatively rare that large groups of adult females travel together in the absence of children or adult males,” explained Hatala. “One scenario in which this kind of group structure is observed is during cooperative foraging activities, in which several adult females forage together, perhaps accompanied by one or two adult males for some portion of that time. Infants may be carried, but young children who are old enough to walk will often stay behind rather than participating in the foraging activities.”

Hatala acknowledges the possibility of alternate scenarios, both in terms of the group’s composition and what they were doing.

“For instance, it is hard to differentiate a small adult footprint from the footprint of an adolescent. Perhaps some members of the traveling group who we estimate to be adult females were actually adolescents of various sexes,” he said. “That group composition could have very different behavioral implications. Regardless, the pattern that we estimate is intriguing, and we hope that this study highlights the potential utility of fossil footprints for identifying behavioral patterns in the fossil record.”

The other episode documented in the paper involved six distinct trackways, with individuals heading in the opposite direction. These tracks were more diverse in terms of speed, as some individuals were walking and some were running. It’s not likely that a single group is responsible for these footprints.

Karen Moreno, an archaeologist at Austral University of Chile and an expert on fossilized footprints, said she could only “dream” of finding such a large collection of old footprints in such good condition. Moreno welcomed the new study and how the authors used statistical methods to make their case, but she felt some important questions weren’t sufficiently addressed in the paper.

In particular, she said the authors could’ve shone more light on the reasons for the trackways themselves. It’s possible, for example, that “a geographical limitation prevented them from following some other route or obligated them to walk through a naturally restricted area,” Moreno told Gizmodo. She said it’s “widely known that animals, including humans, naturally follow the shoreline, thus presenting a common trackway orientation in this type of landscape.” Moreno wonders if some other factor was at play that “can overrule the primary hypothesis for a group behavior.”

The paper also documents prints made by a cow-like animal in the same trackbed and in direct association with the human prints, but the authors failed to make any sort of connection between the two, said Moreno.

Moreno was concerned about how the authors used measurements from modern human feet to infer the sex of individuals.

“Sex differences were [determined] with confidence given modern foot size distribution, but we might continue to ask if past communities had the same size differences,” Moreno told Gizmodo. “This distribution might have drifted in time, being probably difficult to be guessed in the oldest records, particularly if this site is 11,000 or 12,000 thousand years old,” rather than the more recent 5,760-year-old estimate, she said.

Moreno’s own research involves the oldest footprints found in the Americas, which were found in Pilauco, Chile and dated to 15,600 years old (though not without controversy). One print was found to be 28 centimeters long (11 inches), which is unexpectedly large, given the average foot size of local indigenous people living today, which is around 23 to 24 centimeters (9 to 9.4 inches).

“This is to exemplify that modern communities might not be the best fit for a real population foot size distribution,” Moreno told Gizmodo.

Her concerns aside, Moreno said she is “happy” to see that old trackbeds chronicling early modern humans are being found, “so we have a wider amount of data to compare and address questions about human immigration and other behaviors.”