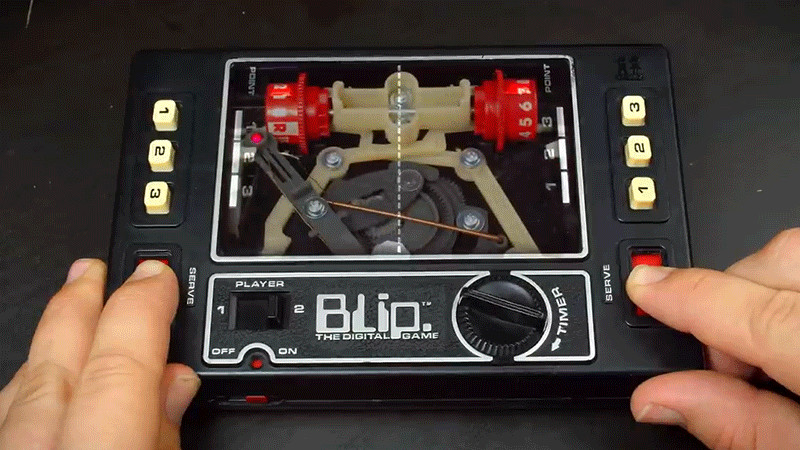 It’s absolutely primitive by today’s standards, but when Pong arrived in 1972, it was a technological marvel. So how did Tomy create a handheld knock-off of the game in 1977 when the electronics needed to miniaturize it didn’t exist yet? It created this mechanical alternative that might be one of the most bizarre portable gaming machines I’ve ever seen.

Despite a retro-futuristic font and a tagline that blatantly advertises Blip as “The Digital Game,” as YouTube’s Tech Tangents discovered, the only actual electronics inside Tomy’s handheld is a single red LED powered by a pair of AA batteries. It creates the illusion that Blip works just like the arcade and home versions of Pong—the world’s first commercially successful video game—but once you open up the housing and peer beneath its fake screen, Blip’s old school secrets are revealed.

The first indication that you’re not getting the authentic Pong experience is that instead of controllers with spinning knobs that reposition a pair of on-screen paddles, players press one of three numbered buttons that correspond to where they think the ball is going to end up on their side. It’s not quite as exciting, which is probably why you’ve never heard of Blip until today.

To start a game, players wind a small dial that’s labeled as the timer, but in reality, it’s also tightening a spring that powers all of the mechanisms and gears inside the machine. Blip might be one of the lamest Pong clones of the ‘70s, but at the same time, its internal mechanisms that make the red dot bounce back and forth are a minor engineering marvel.

The same can’t be said for its gameplay, unfortunately. The design of Blip’s mechanical moving arm inside means the red dot always travels through the center of the screen, which halves the distance players have to predict where the ball is going to end up. By comparison, in real Pong, as soon as the ball bounces off an opponent’s paddle the other player can immediately track where it’s headed, and move their paddle into place. As a result, Tech Tangents calculated that players have about 150 milliseconds to predict where the red ball in Blip is going to end up, making the game incredibly difficult to master, unless you simply memorize the repetitive pattern it uses.

So why would anyone have bought this? When Blip was released in 1977, the cheapest electronic Pong clones that connected to a TV still cost about $60, which was the equivalent of about $250 in today’s money. Blip was just under $8, or around $30 if sold today. Like the Tiger Electronic games of the late ‘80s and early ‘90s, it hit the perfect price point for those who couldn’t otherwise afford the bleeding edge of gaming at the time.