In a Summer Without Blockbusters, the Bon Appétit Test Kitchen Is the Shared Universe We Need 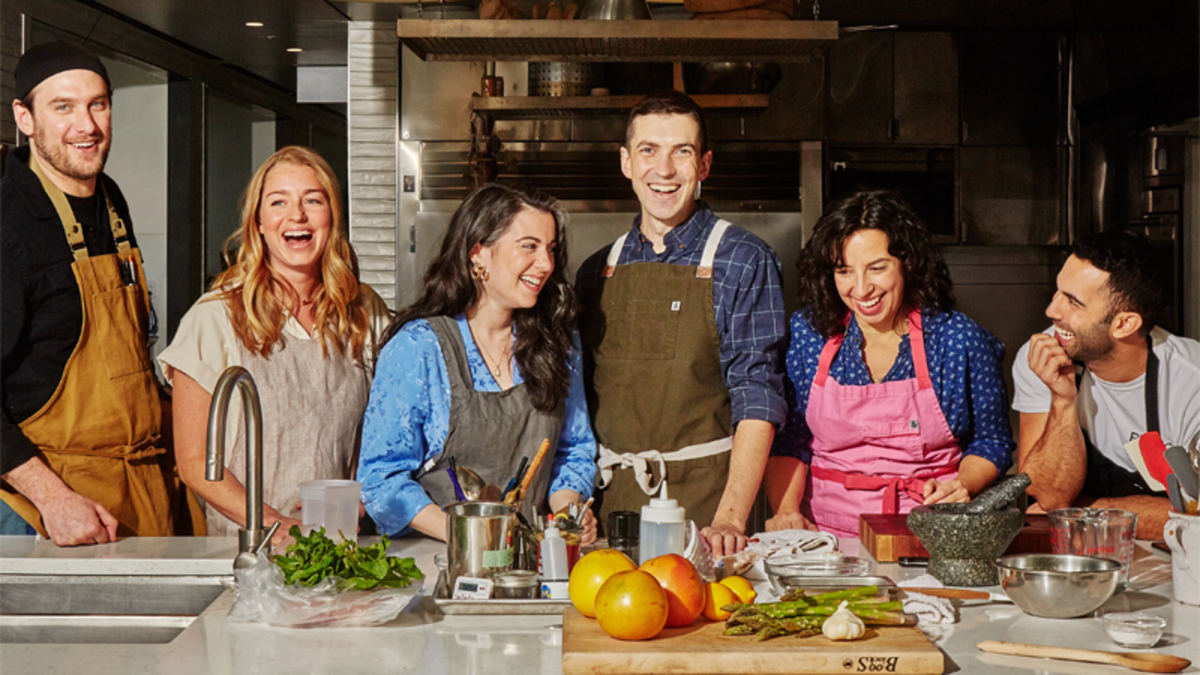 Current events have rendered what was going to be a summer of vast franchises, teeming cinematic universes, and interconnected megablockbusters rather moot at this point. But in these trying times, we can still turn to one heroic universe that nails the shared concept unlike many of its theatrical counterparts: I am, of course, talking about Bon Appétit.

The Condé Nast magazine’s YouTube channel, has quietly—but increasingly loudly—spent the past few years taking the internet by storm in a cavalcade of fancily recreated junk snacks and more pickled foodstuffs than you could shake some allicin-rich garlic cloves at.

If you got either of those references then you, perhaps like me, have likewise been swept up by this storm that has people talking about cooks Claire Saffitz, Brad Leone, Chris Morroco, Sohla El-Waylly, and their legion of colleagues in the same hushed tones you would reserve for the likes of Wonder Woman, Captain America, Luke Skywalker, and their fellow cinematic titans.

For those who haven’t, a quick step back: The editorial video side of Condé Nast’s long-running food magazine shot to viral fame around 2016, after a push by editor-in-chief Adam Rappaport to bring the magazine’s chefs to the forefront of its video content, not just in the food they developed for the magazine but the professionals themselves. By radically overhauling its output from what was considered the standard of online recipe videos to introducing us to the actual people behind the development and making of these recipes, the world was introduced to cooks who proved far too charismatic to contain, spinning Bon Appétit into a viral, wholesome sensation.

We got video series like It’s Alive! (where the aforementioned Brad experiments with fermented foods and a level of chaotic energy previously unknown to man), Gourmet Makes (the aforementioned Claire’s stressful, meticulous attempts to not just recreate iconic snacks with home-chef techniques, but improve on their mass-produced perfection), Alex Eats It All (the titular Alex Delaney, sampling entire menus of beloved NY eateries), and more. Bon Appétit leans in on the personality of its hosts in a way that many viral cooking videos do not, or rather did not, before BA helped transform YouTube cookery into even more of a click-behemoth than it was at the height of the BuzzFeed Tasty age.

Their recipe videos aren’t some nameless pair of hands zooming through preparation in a matter of minutes via an overhead camera, but people communicating with you—not just the crew behind the camera in front of them, but you the audience at home, educating, joking, acknowledging where they screwed something up in a recipe, or if they nailed a particularly challenging element. More and more the runtime of even a “simple” recipe video BA puts out these days has extended from around five-ish minutes to closer to 15-20, simply because they’re now both a recipe and a conversation with the chef behind that recipe (it’s never just a recipe for banana bread, it’s Carla making banana bread). There is an earnest, gentle humanity to Bon Appétit videos that doesn’t feel like something manufactured for the camera—even though that is exactly what they’re doing, they’re professionals and that’s their job—but simply these people being themselves, and most crucially not just being themselves but being themselves with each other.

But what does incredibly wholesome cooking content have to do with blockbuster superhero movies? To liberally borrow from some Asgardians, the Test Kitchen is not a place, but a people.

BA has become so beloved online because its hosts are not islands, but a tightly-knit team of culinary Avengers that are as fun to watch working together as any superheroic mashup. An attempt to turn BA’s YouTube success into its own premium content channel was spearheaded by Making Perfect, a show in which the entire roster of Test Kitchen personalities split off into duos to build their chosen elements from a collective ideal of a meal (the first season was pizza, the second, Thanksgiving dinner), before culminating with them assembling the final recipe as one.

Does Andy Baraghani wielding a pizza peel carry the same ominous, awesome energy as Captain America wielding Mjolnir? Absolutely. Except it’s not that energy, by any means, that has me drawing parallels to Marvel and DC’s cadre of superhero movies and these goofy, impossibly endearing cooks. Instead, it’s the collaborative, crossover potential that makes the Test Kitchen work the way it does. The potential energy of even a minor crossover is the simple underpinning of all good shared universes—and yet, it’s an underpinning some of our loftiest examples of the franchised-storytelling medium often forget. BA doesn’t just embrace the teamup. It makes teamups normal.

What started with cheeky merchandise acknowledging YouTube comments from diehard Molly Baz fans who would only watch a video to see her in the background, or ones that wondered what European synthwave Chris was bopping his head along to in the background of another, has become BA’s secret weapon. Fans don’t just live for the content, but the chance to see these personalities intermingle as they work with and around each other in the Test Kitchen environment, flittering in and out of each other’s projects and offering help (and sometimes gentle mockery) as they do so.

A flagging Claire in the middle of a grueling episode of Gourmet Makes can be uplifted by the timely arrival of Sohla (to help her temper chocolate, more often than not), or Rhoda—to tell her she’s doing a good job when she can accept no criticism, at this time or ever. Chris and Andy’s jokey rivalries, the mild-mannered rule maker contrasted against an often-saucy epicurean risktaker, feels like it’s ripped out of the same pages of iconic duos as Geordi and Data, or Mulder and Scully. Avengers: Endgame? Keep it. Brad and Claire making sourdough starter donuts? If there was a ticket line to queue in, I’d be number one camping out overnight.

This is, of course, how superhero comics have worked for decades and decades. Yes, there are monumental crossovers, your various crises on various Earths, your wars both civil and secret. But pick up any average superhero comic from the Big Two and there’s often a very good chance you’re not just getting a story that features the hero emblazoned on the cover, but them playing around in whole cities teeming with heroes.

From the Bat-Family to the Avengers, superhero comics thrive on the fact that these characters don’t have their specific beats and areas of expertise, or even their own specific team combinations, but that they often otherwise just co-exist with each other. They’re friends, they hang out. They’ll hop in if they’re in the area and something’s going down. They’re a text or a slide into the DMs away. Marvel and DC’s comics universes are truly universal and excel in the sense of establishing a world full of larger-than-life characters who intermingle within each other’s spheres, helping that world feel as lived-in as it is absurd.

When it comes to live-action adaptations, however, things are…a little more complicated. It’s easy for a comic to just have another superhero swoop in and out of a story for a few panels, but when that superhero is played by a blockbuster Hollywood actor with their own multi-picture movie deal and solo franchise of their own to match, getting them to hang out for a few scenes in someone else’s movie is a logistical nightmare, let alone the thought of those stars showing up on a story designed for TV or a streaming network (and vice versa). Look at how DC struggled to encapsulate the coming together of the Justice League in its race to achieve franchise-parity with Marvel, or how Marvel Studios itself completely buckled under the idea of enmeshing its TV shows like Agents of SHIELD or the Netflix Defenders series with its movie stepsiblings.

This is the reality that has to intercede when fannish nitpicks like “Why don’t the Avengers just show up in everyone’s movies all the time anyway?” run abound. Tying all these events and characters together on the scale Hollywood demands is a more dangerous prospect than headbutting Thanos. Comics, where the budget of a creative team’s imagination is much more stretchable, can thrive on that potential energy in ways their live-action adaptations beholden to schedules, contracts, and budgets simply can’t (even when those budgets are ones given by Disney and Warner Media).

Outside of superheroes, that collaborative tapestry is what drives the appeal—almost to a self-destructive level—of “it all matters” continuities like Star Wars, though they likewise suffer in really getting to act on that appeal in a similar regularity. A character or specific element of one bit of Star Wars appearing in another slice of the galaxy far far away is, for many fans, still a mindblowing event, even if they are meant to all co-exist in this saga anyway because it still feels kind of rare to get that cross-pollination. Clone Wars and Rebels’ Darksaber appearing in The Mandalorian was such a wild reveal not just because it’s a cool-looking sword in the hands of the series’ villain, but because it’s an acknowledgment that those parts of this universe that we’ve seen and loved are directly informing this new chapter we’re watching unfold. That’s something that is, more often than not, left to the books and the comics rather than the “big” stuff like the shows and movies, together but rarely equal.

This is a double-edged sword for these shared universe franchises, in some ways. By making teamup moments events rather than the norm, they’re often incredible, excitable events, huge moments that whip millions and millions of fans into giddy frenzies because they only happen once in a blue moon (or usually when an Avengers movie is coming out). The fact that they are, behind-the-scenes, so challenging to pull off is what lends them an inherent excitability beyond just the playful glee of smashing together action figures that these massive crossovers often entail. But by making them rarities, you lose part of the spark that makes a shared universe so appealing in the first place: the wonder that the next teamup, that next appearance, that next great adventure among teammates, friends, co-workers, is always just around the corner.

Bon Appétit content embraces the earnest normality of these culinary heroes being as strong together, in ways big and small, as they are apart, and shines because of it. You don’t know when Gaby’s going to come and chide Brad for doing something weird in a random video, if Andy’s going to playfully sneak into the background of Molly’s next recipe, or if Delaney will just show up anywhere, at any time, with the perfectly mixed cocktail to match whatever situation he finds himself dropped into.

In an age where every movie studio and their aunt is trying to get a slice of the shared universe pie, so few are actually willing to grapple with the logistical headaches it would take to make truly bringing a shared universe to its full might on-screen a possibility. The pie is BA’s for the taking. It’s also probably theirs for the baking, too.