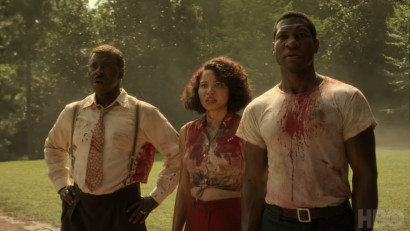 Oftentimes when we dive into horrific stories full of otherworldly monsters, we do so in order to escape the all-too-real demons that haunt us here in the real world. But in the first trailer for HBO’s new adaptation of Matt Ruff’s Lovecraft Country, the racist evils that shaped American culture are realized as quite literal monsters that will get you if you aren’t careful.

Like any teaser trailer worth its salt, our first glimpses of Lovecraft Country purposefully don’t convey the full wildness of what’s in store for its central characters: recently returned Vietnam vet Atticus Black (Johnathan Majors), his uncle George (Courtney B. Vance), and Letitia Dandrige (Jurnee Smollett-Bell). But what it does make clear is that in addition to having to deal with the racist evils of 1950s America and its Jim Crow culture, the trio’s going to face all manners of otherworldly creatures that the majority of the public has only ever known as myths.

Even though they’re being hunted by redneck cops and forest dwelling demons alike, Atticus’ resolve to follow his father Montrose Freeman (Michael K. Williams) is what pushes them all to journey into the depths of the chunk of New England known as Lovecraft Country—where the things lurking in the shadows are that much more nefarious and, from the looks of it, dangerously supernatural.