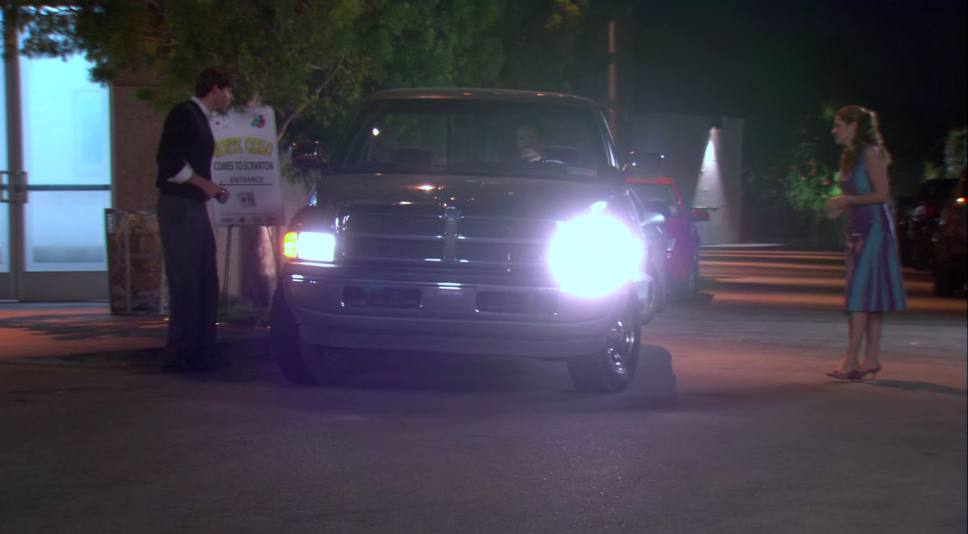 In Season 2, Episode 22 of The Office, titled “Casino Night,” everything changed.

After years of crushing on his friend and co-worker Pam Beesly, Jim Halpert decided to declare his love for her in the parking lot of Dunder Mifflin. Though Pam denied him in the moment, the two later shared a kiss during what remains one of the all time best endings of a TV episode.

On the latest episode of the Office Ladies podcast, former co-stars Jenna Fischer, Angela Kinsey, and John Krasinski talked about the Season 2 finale, and discussed what it was like filming the fan-favorite parking lot and kiss scenes.

“I watched an episode for the first time in so long for this,” Krasinski said. “I haven’t watched one for a little while now, and [“Casino Night”] in particular — that’s some heavy machinery of content.”

“This is the first time I watched ‘Casino Night’ since it aired,” Fischer said. She recalled that the entire cast watched the episode live at showrunner Greg Daniels’ house in 2006.

The episode, written by Steve Carell, had so many outstanding scenes, but it turns out the one given the most attention wasn’t the kiss, it was Jim’s big parking lot reveal.

“That moment in particular was insane for so many reasons. I remember that the cells of my body were really buzzing,” Krasinski said. “I saw the crew running around and deciding where to hide the cameras… Everybody was deciding can [Jim and Pam] see the cameras? Can they not see the cameras? Are they aware of the documentary crew?”

According to Krasinski and Fischer, director Ken Kwapis ruled that the characters wouldn’t be able to see the cameras. So to make the scene as authentic as possible the camera operators didn’t reveal themselves before shooting the scene.

“I remember feeling very alone in the parking lot,” Fischer said. “I remember genuinely being extremely nervous,” Krasinski admitted. “I think I had interpreted it as the biggest scene I had done on the show. Something to that level of intensity was like super terrifying to me and I remember being like, ‘Hey, bro. Remember when you thought you were an actor? Tonight ruins that whole mirage.'”

Though Krasinski was anxious about filming the scene, he shared that one of the reasons he was able to channel Jim so well is because he identified with him.

Off camera, Krasinski even told Kwapis, “I’m going be really honest with you, Ken. This is a layup for me bro, because I lived it.”

“I was like, dude. In my high school yearbook I have every single girl in the school being like, ‘Thank you so much. You were the shoulder to cry on. You were such a good friend when I was in love with Adam,'” he went on. “So when [Kwapis] was like, ‘Hey, do a scene about the love of your life having another guy instead of you,’ I was like, ‘Bro? It’s called my default setting.'”

When Fischer thinks back on the episode, she remembers everyone was most nervous about the parking lot scene. “People always ask about the kiss, but this was the scene we worked hardest on. And it makes sense to me,” she said. “Saying ‘I love you’ is such a vulnerable thing, and you do it so honestly, John.”

Fischer said that the scene took longer to film than any other, and that several lines traded between her and Krasinski were improvised.

“You cried in a couple of the takes I remember, but the one that they used was I think the first time,” she said. “It wrecked me… and after they yelled, ‘cut’ I was like, ‘Oh my god, I’m so sorry I’m terrible.'”

“You are telling us now that you were like, ‘oh my god, I’m so sorry,’ and watching it back today I was like, ‘She’s as cold as ice. Cold blooded!'” Krasinski sang.

After discussing Pam’s reaction, Fischer got to business. “Should we talk about the big old kiss?” she asked. “It’s not even a big kiss, it’s a little kiss. But it’s the perfect kiss.”

For those who don’t know, a serious amount of planning went into this kiss. Every little detail — from the dress Pam wore to the lighting in the office — was scrutinized, and Fischer, Krasinski, Daniels, and Kwapis had several meetings beforehand to nail out specifics. The kiss scene was actually filmed the night before the parking lot scene, and Fischer and Krasinski were kept apart an hour before shooting so their reunion would feel more intense.

“That was my first acting kiss ever,” Krasinski said. Fischer claimed it was her second. Both, however, are forgetting about the brief but real kiss they shared “The Dundies,” but I’ll let it slide because their discussion was so delightful.

“I got on set first and was looking for Randall [Einhorn] and Matt [Sohn] because I used to goof around with those guys,” Krasinski said. “Weirdly my default setting is ‘make jokes when you’re nervous.’ So I was looking for them and was genuinely crestfallen when I couldn’t find them cause I was really nervous.”

“We never rehearsed it on stage together. And I remember they brought me to set. All the lights were dim, there was no one around, it was super eerie,” Fischer said. “I remember doing the bit with my mom on the phone, you walked in, we shot the kiss, and then Ken said, ‘cut,’ and do you remember Greg running out of the conference room like clapping his hands?”

“He was giddy!” Krasinski laughed.

While fans were left on the edge of their seats wondering what was next for Jim and Pam, Krasinski and Fischer were also left in the dark. The entire cast experienced the Jim and Pam cliffhanger after filming the finale, and had to wait to see what Season 3 had in store just like the rest of us.