Modes of Transportation, Ranked From Coolest to Least Cool 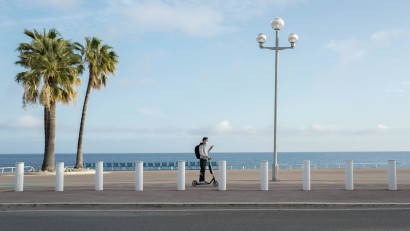 Even in the middle of a worldwide pandemic, rollerblading isn’t very cool.

See, I’ve been spending a lot of time looking out my window (as one tends to do during The Quarantine), watching as the occasional jogger or delivery person with a pizza strapped to the back of their bike rides by. This got me thinking.

I’m not a huge fan of running (bad knees) and I don’t own a bike, so I figured the next best thing would be to go out on rollerblades. I’ve played hockey for more than 20 years, and considering the difficulty of playing basketball while maintaining social distancing, I thought now might be a good time to get some solo skating practice in. Boy, was I wrong.

I basically had a weapon (that is, a hockey stick) in my hands, but I still looked like a goofball. Even with fewer people out and about, I felt self-conscious, as though hundreds of eyes in nearby apartments were rolling as I skated by. Compared to rollerskating, which conjures of up nostalgic images of free-spirited summer days, rollerblading has all the intensity of skateboarding with none of the faux-subversive cachet.

I suppose this is just a long-winded way of saying there’s a lot of ways to get around—it’s amazing how your mind wanders when you’re trapped inside—with some of them being way slicker than others. So here’s a list of modes of transportation from best to worst based on their coolness and sartorial elegance.

Rockets and space travel have to be number one, because no matter where you are when you reach your destination—the Moon, Mars, Heaven—you’re guaranteed an interesting trip. And that doesn’t even factor in the incredible opulence of launching something into space, with current costs hovering at around $10,000 per pound. Heck, there was even an Oscar-winning movie about that time Tom Hanks tried to go to the Moon—and he didn’t even fucking make it.

In case you needed another example of why trickle-down economics is a lie, just look at air travel for rich people. While first-class seats get bigger and fancier with multiple course meals and even bedrooms and showers (and don’t you dare dream about sneaking into the first-class cabin to use the bathroom), back in coach, airlines are packing more and more travelers into less and less space. Some people are even floating the idea of doing away with seats completely and replacing them with rollercoaster harnesses and a barstool that goes up your ass.

These days, the average couch traveler is lucky if they can even buy a stale-ass sandwich with their own money. Unsurprisingly, it seems Jennifer Aniston’s worst nightmare is having to fly economy. If you’re not sitting in business class (which is another scam) or better, you’re not much more than cargo.

Tanks are awesome and one of the few forms of transportation where a weapon is an integral part of its identity. Unfortunately, unless you are in the military or are Arnold Schwarzenegger (which is pretty much the same thing), chances are you’ll never have a chance to drive one, which is probably one of the saddest truths you realize while growing up.

If this was a list based on safety, motorcycles would be way closer to the bottom, but it’s not. Similar to rockets, motorcycles are near the top because your journey will always be exciting and it’s hard not to cop an aggressive ‘tude while riding. After all, if you stop paying attention for even a second, you’re dead. Plus, when you’re properly kitted out with sick leathers and a nice helmet, you kinda look like a space trooper from the future.

There’s nothing cool about growing old and easing into senility. Thankfully, these are two things many motorcyclists won’t have to worry about.

Trains are just a more spacious version of airplanes, except that you can only go where the rails are and and trips take way longer. In return, you get bigger windows, the absence of over-produced safety videos, and entire sections of the vehicle devoted to getting you drunk. Cheers.

Trying to rank horse-related forms of travel was easily the most difficult part of making this list, because between riding a horse, carriages, and those fucking Budweiser horses, there are a lot of variables to consider. Ultimately, it comes down to the fact that a horse-drawn transport is a more regal affair than its engine-powered equivalent. Who cares if you’re late, it’s not really a party until the horse gets there.

Horses are also pretty expensive, and unlike a Ferrari or something, you can’t just let them sit in a garage while you speculate wildly about how much your classic ride might fetch at Mecum. That pretty much makes owning a horse a type of performance art where you and your pet get to show off the kind of dumb shit you can buy when you’re rich. It’s a weird flex, but okay.

This is what we were made to do. It’s relaxing, a good but not overly strenuous form of exercise, and almost everyone could benefit from doing it more often. People love it, Michael Jackson even made up his own version of it, and dogs love it so much you basically can’t use the word in their presence without them freaking out.

Without talking too much about all the different types of bikes—such as fixed-gear bikes (which are for hipsters), recumbent bikes (which are for nerds), penny-farthings (which are for fancy lads from Victorian England), and unicycles (which are for serial killers)—bicycles offer a breezy middle ground between walking and driving a car. They are relatively cheap and easy to store, and simple enough that most repairs can be done at home, if you are so inclined.

Cars are a pretty great invention. Unlike walking or cycling, you get to sit inside an enclosed space that protects you from the elements with heat and AC. You might even get reclining seats and a radio to keep you comfy and entertained on long journeys. And while some people have a hard time staying inside the lanes or obeying a universally accepted set of lines and symbols, you do typically get to your destination without ever having to pedal. Cars really are a miracle of modern technology.

At the same time, they are relatively inefficient compared to a bus or a train, and while riding in one is quite pleasant, we’ve made way more cars than the world really needs. To make matters worse, after the car was invented, we started designing cities and towns around automobiles, which means that in a lot of places, owning a car (which ain’t cheap) isn’t a fun little hobby, it’s a necessity. So in the end, this leaves cars feeling like a great idea with only a mediocre execution.

Boats are fun and there’s nothing like being out on the open water. But if you really get into boats, you risk becoming the insufferable asshole who wears shitty water moccasins, khaki capris, and white linen shirts and is always asking people to visit them out in the Hamptons. Alternatively, you end up buying a pontoon boat—which is barely a boat at all—so you can fail at catching fish, get wasted, and then pass out before noon, just so you can brag about your stupid lobster sunburn for the next six months until winter rolls around.

Nowadays, a plane flight for regular folk is simply a means of transportation. There’s nothing fun, interesting, or luxurious about an economy plane ticket. You get crammed into seats that don’t have enough room for your knees or shoulders unless you’re shorter than 5’6″, forcing you to become intimately acquainted with everyone in a three-row radius.

I’ve already said how embarrassing it is to rollerblade as an adult, which often looks even worse considering that 99 percent of rollerbladers who aren’t dancing through cones in Central Park can’t actually skate.

But perhaps more importantly, on this list (which is the only one that matters) rollerblades serve as the Mendoza line for what modes of transportation are acceptable in almost any situation, and which forms of movement you should be actively avoiding. Anything above rollerblades is fine, while anything below means it’s open season for shade and humiliation.

If you’re above the age of 13, you shouldn’t ride scooters. Ever. Scooters are for children. There are few activities less dignified than an adult than riding a scooter. No one wants to see a man in a three-piece suit furiously pumping the pavement as he tries to rush over to his next board meeting, a sight that’s sadly somewhat common around Silicon Valley.

Scooters have less utility than a bike, and are more annoying to carry around than bikes or rollerblades. They are the worst of both worlds with the only advantage being that young children might be able to ride one without breaking both of their wrists. If you ride a scooter, you’re more likely to ding your shin and give up than actually get where you’re going. And with the number of scooter-related accidents on the rise, people who think they know what they’re doing are probably just liars.

And don’t even get me started about stuff like Vespas or the millions of motorized scooters people drive around in Asia, which look like you’re driving around while sitting on a toilet, and that the only way you can squeeze the poop out of your ass is to pull hard on the handlebars. I mean, c’mon.