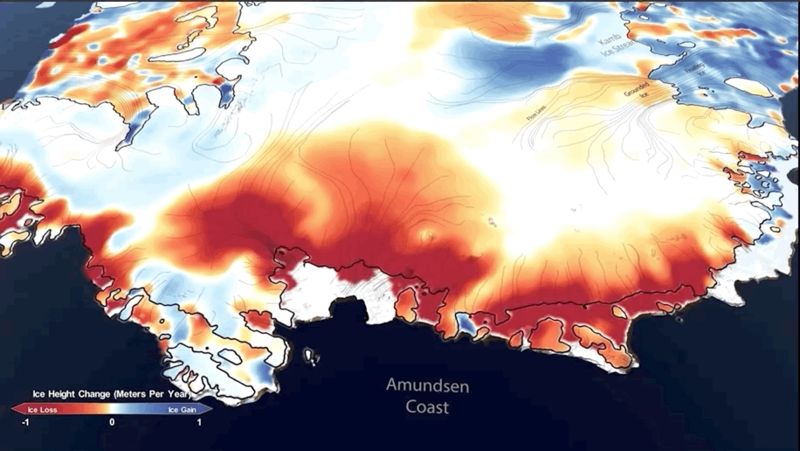 The ice sheets are melting, and a new study research relies on state-of-the-art technology to reveal where the biggest losses are happening. It’s pretty freaking cool even if the results are bad news.

The findings, published in Science on Thursday, use space lasers to create a detailed view of the planet’s biggest pieces of ice. The team of researchers, which includes scientists from NASA and the University of Washington, looked at ice mass change from 2003 to 2019 to get a sense of how global warming is affecting these critical ice sheets.

Miami might be fresh on the mind for some because—hello!—Jennifer Lopez and Shakira completely…

Previous studies have shown that sea-level rise may cause extreme floods to happen daily in most of the U.S. coast by the end of the century. By 2050, we may be bidding farewell to our beloved beaches as well. But to refine our understanding of the future, scientists need to understand what’s going with ice sheets today.

The researchers gathered the data for the new study using two laser altimeters that can measure the height of snow surface from space on NASA’s Ice, Cloud, and land Elevation Satellite or ICESat. The first ICESat launched in 2003 and collected data until it was retired in 2010. A second ICESat—dubbed ICESat-2—launched in 2018 with an even more precise laser altimeter to gather data.

“The result is a fantastically detailed look at how the ice sheets are changing over a 15+ year period,” Ted Scambos, a senior research scientist at the University of Colorado’s Earth Science and Observation Center who was not involved in the study, told Earther.

The study shows ice sheets are gaining some snow but losing mass overall. Though Antarctica is growing thicker in its interior, the coasts of West Antarctica and the Antarctic Peninsula are particularly vulnerable to ice loss. Warm ocean water undercuts floating ice shelves there and causing more ice to spill into the sea, more than offsetting the interior gains.

Greenland is also experiencing some thickening in its interior, but this is mostly happening at high elevations. Here, too, this snow accumulation isn’t enough to offset the melting of ice on the coasts.

“Our study showed that there are a variety of processes at work in Antarctica and Greenland, with thickening in some places and thinning in others,” author Ben Smith, the principal physicist at the University of Washington’s Applied Physics Laboratory, told Earther in an email. “We can measure both processes precisely, and our study shows that the net result is that the loss of ice from the grounded ice sheets into the ocean is making a large contribution to sea-level rise.”

This research fits in line with what previous studies have shown. It also doesn’t include other factors that could be driving even more ice loss. Smith said the satellites measure thickness of the ice sheets and shelves, but they don’t capture the major iceberg calving events we’ve seen in recent years. Nor do they capture the breakdown at the front of ice shelves where researchers worry ever greater walls of ice could tumble into the ocean. That could be an unstoppable destabilizing force in the coming decades, particularly for West Antarctica. In short, what we’re seeing in this study is likely only a slice of what’s to come for these critical ice sheets—and the coasts that could suffer if melt speeds up.

“It is only capturing the beginning of the ice sheet changes we expect to see,” Smith said. “We need to keep making measurements like these in years and decades to come to understand the long-term evolution of the ice sheets.”

These findings illustrate just how quickly ice is going away as temperatures rise. How worse this gets depends entirely on much longer the world goes on without sufficient climate action.