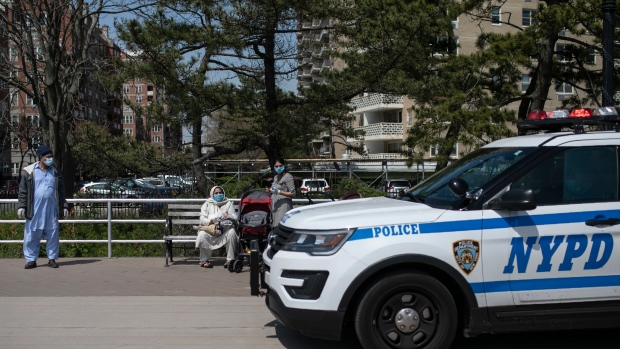 The New York Police Department hasn’t let the coronavirus pandemic go to waste when it comes to pulling the same racist bullshit: The agency issued 374 criminal summonses related to alleged violations of the city’s social distancing guidelines between March 16 and May 5—and over 81 percent of them went to New Yorkers who are Latino or black. Of the 120 separate arrests made by the NYPD on the same grounds, leaked data that has not yet been officially acknowledged by Mayor Bill de Blasio or the NYPD, that figure shoots to over 90 percent.

According to Gothamist, public defenders with the Legal Aid Society told the site that the numbers could actually be downplaying how bad the situation is. Officers have used the social distancing rules as a flimsy pretext to search and arrest black and brown New Yorkers on other grounds ranging from marijuana possession to obscure crimes like obstructing governmental administration, they told the site.

Brooklyn Borough President Eric Adams, a former law enforcement officer, told CBS 2, “If we’re saying after the initial engagement it leads to police action, and over 90% of police action leads to the arrests of people of color, that is problematic because it states that we didn’t have to do anything too often, but when we did do it, 90% were black and Hispanic.”

The office of Mayor Bill de Blasio has suggested that the data is merely preliminary, while the mayor himself has sought to portray the NYPD as acting with extra restraint during the pandemic and told reporters on Friday that “number of arrests and summonses are extraordinarily low.”

However, the mayor also conceded that the summonses statistics clearly showing disproportionate targeting of black and brown New Yorkers are “an indicator that something’s wrong and we need to fix it. And we will fix it.” At least two videos have shown NYPD officers acting aggressively to enforce the guidelines, including an officer who was stripped of his badge and gun after he approached a group while holding a stun gun and then punched an individual under arrest on the ground.

The district attorney of Queens, Melinda Katz, said on Friday that her office would not prosecute any arrests related to social distancing rules, citing apparent racial bias in enforcement.

According to CNN, the NYPD says that of 206 summonses in Brooklyn, 121 were handed down at 12 social gatherings, while 42 of 99 summonses in the Bronx were issued at five such gatherings. Overall, around two-thirds of the summonses issued to white people affected NYPD’s Patrol Borough North, which is home to ultra-Orthodox Jewish neighborhoods. On at least two occasions, the NYPD has intervened to disperse large public funerals attended by some members of the ultra-Orthodox community.

“If you think about this in terms of the vulnerabilities that people have based on the social conditions that they live in, they may live in communities with high density, they may live in houses where there are lots of people living in small spaces, they may do work where they’re more exposed to something like a coronavirus,” Evelynn Hammonds, the chair of Harvard’s department of history of science, told the New Yorker in a recent interview. “Those are the conditions that make them more vulnerable.”

“… We have a fragmented public-health system, which makes people on the margins much more vulnerable to outbreaks of all kinds of diseases than the majority population is,” Hammonds added.

This week, Streetsblog also reported that from Jan. 1 to March 31 this year, just one of 80 tickets for jaywalking issued by the NYPD was to an individual identified as white. All 79 of the other tickets were issued to people identified as black or Hispanic.