Our Exclusive First Look at the New Back to the Future Game Is Also Our Last Look, That’s How Time Travel Works Right? 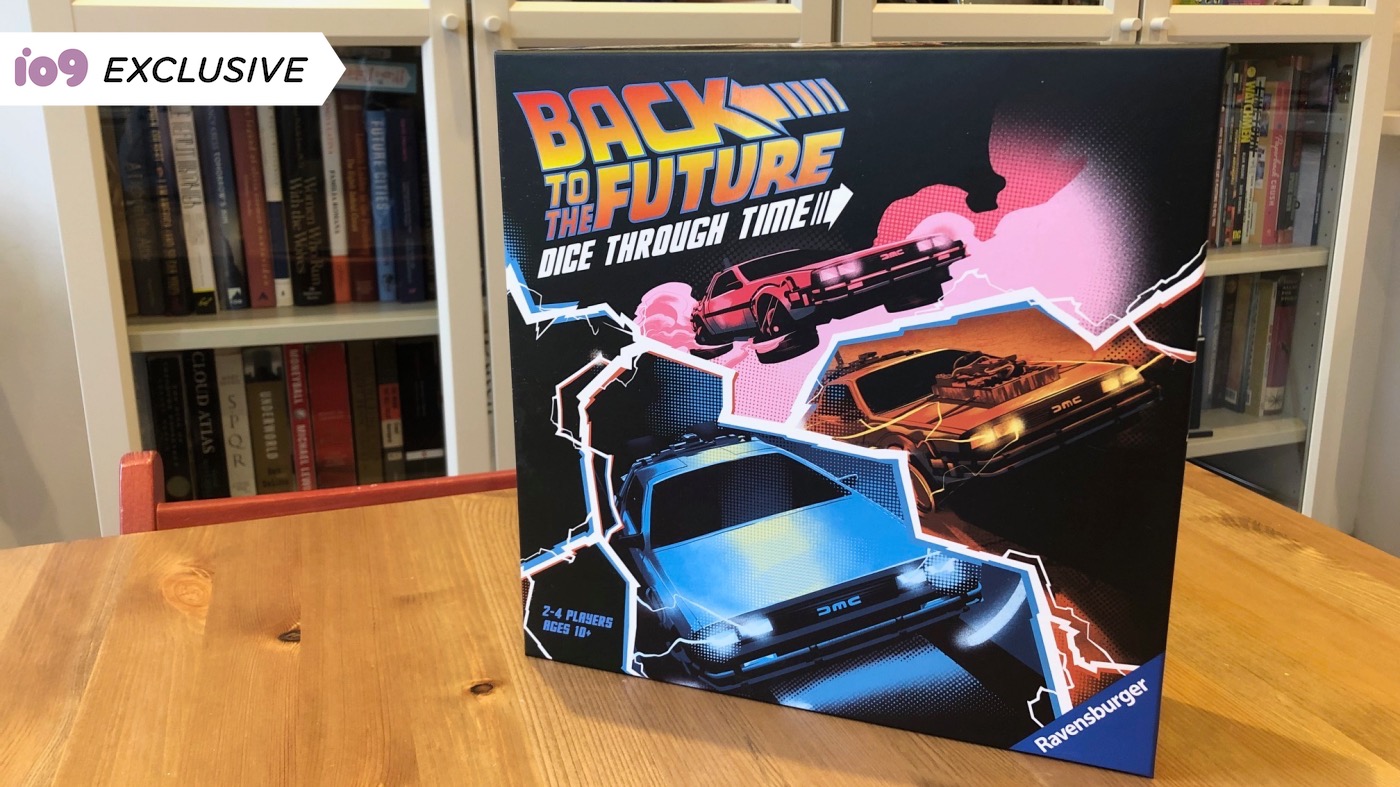 Great Scott! Ravensburger is getting “heavy” with its latest game, Back to the Future: Dice Through Time, which puts players in the driver’s seat of the DeLorean to stop Biff Tannen from screwing up the timeline. In io9’s exclusive first play-through, we found the game to be a fun and surprisingly insightful homage to the entire Back to the Future series—but be warned, it’s not easy getting back to the future.

Back to the Future: Dice Through Time is a two-to-four player cooperative dice game to celebrate the film’s 35th anniversary, which is July 3, 2020. Players work together, each one playing a different version of Doc Brown and Marty McFly, to restore all the items that Biff displaced throughout time.

The board showcases each era from the three Back to the Future movies, ranging from 1885 all the way through the far-out future of 2015. As you can see below, the artwork is bright and fun, feeling like an homage to 1960s modernism. Don Draper would be proud.

Every round, a series of events from Back to the Future are triggered, like Doc prepping the DeLorean for railway travel in 1885 or Griff trying to recruit Marty Jr. at the Cafe ‘80s. They’re placed on the board and players have to resolve them to uncover whatever time-displaced item Biff stored away during that encounter, later returning that item where (and when) it belongs. There are three difficulty levels, which alter the number of items you need to restore. Just be careful of all four versions of Biff: If he’s on the same space as the event, you can’t resolve it without beating him up first.

Most of the action is performed with specialty dice, which players use to travel through time, resolve events, and stop time paradoxes. Oh yeah, those exist in this game and they are a pain. If a round goes by and an event isn’t resolved, it can trigger a paradox. They also happen whenever two players end up on the same space together, as they represent different eras of those same characters. Let’s hope they don’t make eye contact.

Here are some more photos of the gameplay:

1985’s Biff is “butting” in on Doc building the DeLorean.
I played as the 1985 Doc and Marty. None of the versions get unique abilities, unfortunately. That would’ve been a nice feature.
Save the clock tower!
The dice let you do things like leap through time and beat the crap out of Biff.

The clocks represent paradoxes, while the Einstein ones are bonuses you get for returning items to their right time and place.
Each player can hold up to two items in their inventory at a time.
Too many Biffs, too many Biffs.
Buttheads.

This is what I found most impressive about this game: The mechanics work to make you think like a time traveler. For example, you can leave an extra die you rolled for another time traveler to use—only problem is, you both have to be in the same location, in different eras, and the other player has to be ahead of you in the timeline. Just like how Doc left the DeLorean in the cave for Marty to retrieve later. The designers tried hard to make a game that made you feel like you were time traveling, and they did a wonderful job.

It’s no surprise. Ravensburger is great at making licensed board games that envelop you in the stories they’re based on. For example, the Jaws game nailed its story by combining strategy-type guessing with light tabletop roleplaying game combat. Likewise, the Universal Movie Monsters game Horrified is tense but fun, making it feel like both a survival game and a Cluedo investigation. Back to the Future: Dice Through Time’s gaming mechanic is all about working with what you have, on a board that’s both limitless and restrictive. You can go anywhere and any-when, but how can you do what needs to be done without screwing things up even more? Ten bucks says it’ll take you a few times to succeed, as it did with me, but the victory will be so worth it.

Back to the Future: Dice Through Time is set to come out on June 21 exclusively at Target, and will cost about $30. The game will be available for pre-order, and we’ll keep you updated when that is announced.

Talk about solar. Women. Whether you’re looking to elevate your career or are seeking ways to boost your income, we’ve got you covered.