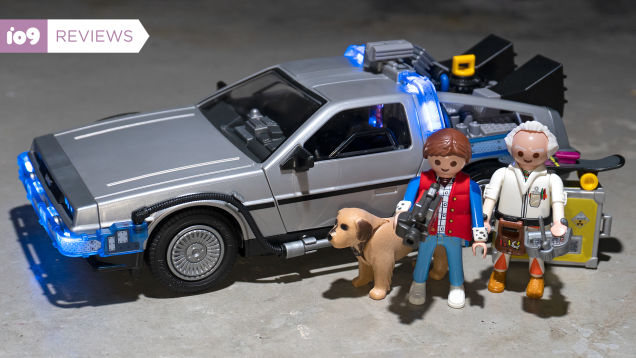 Toys and CollectiblesAction figures, statues, exclusives, and other merchandise. Beware: if you look here, you’re probably going to spend some money afterwards.

Despite what Star Wars and George Lucas taught the industry about how to properly market a summer blockbuster, when Back to the Future hit theaters in 1985, there was a dismal amount of movie merchandise in stores. But 35 years later, an avalanche of BttF collectibles is en route, including some new sets from Playmobil that include a surprising level of detail for toys designed for six-year-olds.

In its defense, Back to the Future wasn’t exactly a movie targeted at kids when it was released, so Universal Pictures and Amblin Entertainment probably didn’t see a reason to fill toy stores with action figures and collectibles at the time. But now that the kids who grew up with the films are introducing their own kids to the trilogy, it’s as good a time as any to crank the merchandising machine to 11.

It’s only recently that Playmobil, a toy company that’s been selling its own claw-handed figures and playsets for over 40 years, has branched out with licensed properties, including Ghostbusters and How to Train Your Dragon. But despite being late to the game, the toymaker’s themed playsets have included an attention to detail that rivals pricier collectibles.

Playmobil’s new Back to the Future sets focus on the first film in the trilogy, and the two main characters: Marty McFly and Dr. Emmett Brown. They don’t include the same level of detail that companies like Hot Toys put into their $300 collectibles, but unless you’re lacking a soul, it’s impossible not to find the Playmobil versions of Doc and Marty incredibly charming. Both of their costumes have been recreated as well as they can be, including Marty’s puffy red vest and Doc’s jumpsuit, plus you get a handful of accessories like a tiny ‘80s-era camcorder, a skateboard, and the DeLorean’s remote control.

For an extra $8 (the main BttF set is $50), Playmobil also sells an additional two-pack of Marty and Doc figures featuring the outfits they wore back in 1955, including a guitar accessory and a “Save the Clock Tower” flyer. Unfortunately, neither set includes Marty’s 2015 pink hoverboard from the sequel, but here’s to hoping Playmobil eventually expands this line with sets based on the other two films in the trilogy.

As charming as the figures are, the real reason collectors will be shelling out $50 for this new Back to the Future playset is the time-traveling DeLorean toy. Playmobil could have really phoned this one in, but instead—despite being an all plastic affair so it can survive playtime with a six-year-old—it’s one of the most detailed BttF DeLoreans I’ve ever seen.

You’ll need to slog through some self-assembly which includes a bunch of stickers you’ll really want to take some effort to carefully apply, but the model is relatively easy to put together. It includes features like working gull-wing doors, a plutonium chamber, time circuits on the dashboard, the California OUTATIME license plate, and the iconic DMC badge on the front grill.

A set of two AAA batteries installed under the model power a set of LEDs and light channels that help bring the toy to life, recreating the animated light show that appears just before the DeLorean travels through time. It also illuminates a tiny version of the flux capacitor found inside the vehicle, which might be one of this toy’s best features.

This version of the DeLorean doesn’t include all of the upgrades Doc made when he visited 2015—there’s no Mr. Fusion on the back to make powering the time circuits easier. But it does include the Goldie Wilson hover conversion complete with wheels that fold down allowing the DeLorean to fly. You have to flip over each wheel manually, there’s no lever to automatically do all four of them at the same time, but they lock into place with a satisfying click. The last thing you want is to display a BttF DeLorean in hover mode with saggy wheels, right?

If you’re a stickler for hyper-real figures with likenesses that look like you’ve shrunk and trapped a real person on your toy shelf, the simple but iconic smiles of Playmobil’s Back to the Future figures probably aren’t for you. (Trying to pose a figure with just six points of articulation is an act of frustration.) But where its figures might be lacking for some collectors, Playmobil’s new time-traveling DeLorean toy is a fantastic addition to any Back to the Future collection. Even if you do have a six-year-old at home, you’ll probably find yourself playing with it more than they do.

Hvad er slikkepindekursus for børn hos sugar pilots, hovedstaden?. New hindi movies. Smoking cannabis would be prohibited under the legislation, and patients would not be able to grow their own plants.