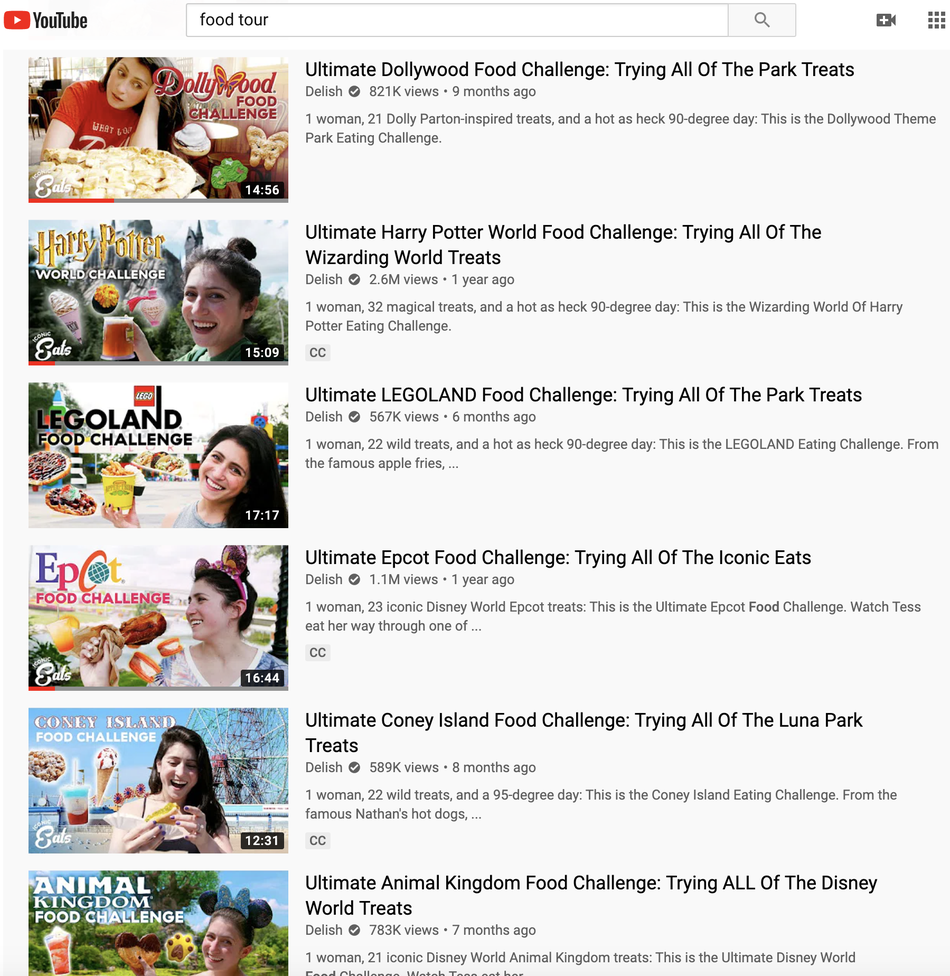 Ah, a sunny day spent at the theme park. Whether you’re riding high on Dumbo’s back or rubbing Vaseline on your chafed thighs, whittling away a summer weekend with resort amusements is among the most magical — and miserable — of vacation activities.

From the moment you put on your sunscreen to the second you wish you’d packed bandaids, nothing beats a day at Disney, Universal, Busch Gardens, Six Flags, Cedar Point, Knott’s Berry, or your favorite local attraction. It’s the perfect blend of high-highs and low-lows that makes for a memorable (if chaotic) adventure you and your pals will be reliving for years to come.

No virtual experience captures a day at the park like theme park food tours.

Of course, the coronavirus pandemic has closed many of the world’s most popular theme parks, in many cases for the longest periods in the parks’ history. Before COVID-19 hit California, Disneyland had only shuttered for single days at a time following the assassination of President John F. Kennedy, the 9/11 attacks, and the 6.7-magnitude Northridge Earthquake.

So what’s a park lover to do with the happiest places on Earth shut for the foreseeable future? Why, board a tram to the fantastical land of YouTube of course!

Theme park culture (especially Disney parks culture) thrives online. With first-person ride-throughs of our favorite attractions running alongside clips of pitch-perfect character meet-and-greets, it’s easy to get lost in a video binge as long as the line for Space Mountain. But no virtual experience captures a day at the park — and the emotional rollercoaster that comes with it — like theme park food tours.

A delightful blend of park appreciation and Mukbang formatting, this YouTube subgenre is a lightning rod for online audiences. Professionals and amateurs alike have undertaken colossal culinary challenges, eating iconic foods in munching marathons that are recapped in videos lasting anywhere between 15 and 30 minutes. It’s a decadent, slightly overwhelming affair that regularly garners these brave creators hundreds of thousands to millions of views.

“Well, we know our audience is obsessed with Disney.”

Search “food tours” on YouTube and you’ll soon see the face of the format’s reigning queen.

Delish senior editor and “Iconic Eats” host Tess Koman has visited more parks than many of us will see in our lifetime, all in pursuit of tasty foods to show her subscribers. With the help of Delish’s lead creative video producer Chelsea Lupkin, Koman chronicles the extreme excitement and tremendous discomfort of overindulging on amusement park snacks.

“To be perfectly transparent, the whole ‘Iconic Eats’ thing was a happy accident,” Koman says over the phone. “I had recently come to Delish and pitched myself as on-camera talent, but in the way of iconic foods in certain places around the country — whether it was beignets in New Orleans or deep dish pizza in Chicago or whatever it might be… And at the same time, I was headed to Disneyland on a press trip and just kind of thought, ‘Well, we know our audience is obsessed with Disney.'”

Returning to New York from California, Koman was just happy to have another video under her belt. But when her Disney trip video blew up “so hard and so fast,” she knew the possibilities were limitless.

And so, “Iconic Eats” was born.

Visiting Epcot, Dollywood, Legoland, and more, Koman and Lupkin now have their production format down to a science. They start by coordinating with park representatives (an essential step Koman says helps filming go smoothly) and creating a meal-to-meal schedule.

“By the time I get to a park, I have a schedule of everything I’m going to be eating and when over the course of a single day,” she says, emphasizing the importance of having a game plan but keeping her on-camera vibe spontaneous.

“Actually, what I do is, once the schedule is entirely finalized, I won’t look at it in the time between finalization and when I actually show up to the park so I can kind of surprise myself all over again.”

How long Koman has to eat the park’s dishes — typically, 10 to 30 per venue — varies greatly. Depending on how much time park operations can spare, she may have all day or just a few hours to get through everything on her itinerary.

“Disney without fail wants us there as early as possible, for crowd control reasons or whatever it might be. With Galaxy’s Edge, I remember it was 5 a.m.”

Starting her day at Oga’s Cantina with a Blue Bantha (basically milk and cookies) and facing a hard stop at 11:30 a.m., Koman had to sprint through Orlando’s galaxy far, far away in just 6 and a half hours — roughly how long it would take to wait for and ride Millenium Falcon: Smugglers Run twice.

“There is an element to [these videos] of super, super, super excitement and gratefulness: ‘I can’t believe this is my job, blah, blah, blah.’ But it’s also got a bit of ‘Oh my god, what have I done?'”

Still, Koman says Galaxy’s Edge wasn’t the most anxiety-inducing shoot she’s done. That title goes to Animal Kingdom: “There’s so much to eat and it is so big!” That shoot didn’t end until nightfall.

A self-described Jersey girl, Koman is always honest about her job’s more stressful aspects. In her videos, Koman often talks with Lupkin about the havoc these mammoth menus wreak on her stomach. To prevent matters getting too out of hand, she has a backpack with all the essentials.

“I have Tums, I have Pepto, I had Imodium one time, honestly.”

“In my personal bag, I have Tums, I have Pepto, I had Imodium one time, honestly. I have my sunscreen. Chelsea has her sunscreen, and she always keeps bug spray on her. She’s like our designated bug spray person. Oh God, what else do I have in there? It’s funny because I actually don’t unpack that backpack. I leave it the same between trips.”

With her go-bag at the ready, Koman is eager to get back to the theme park scene as soon as it reopens. But in the meantime, she’s thrilled folks at home are finding her videos.

“My knee-jerk instinct when all of this happened because we rolled out Knott’s Berry Farm and Magic Mountain during shelter-in-place mandates was that people would stay away from them because it would make them sad more than anything else. But there’s some kind of connection there that is making people happy to think of sunnier times.”

“In their own very special, strange way the videos provide a service for something that people really look forward to. People spend a lot of time and resources getting their families to these parks, and when they get there they really want to enjoy themselves. So I think the idea of a curated food tour, in a place that they are already really excited about plus the [YouTube] search volume on the park itself has proven to be a very interesting and winning combo.”

For park guests missing their favorite vacation spots this summer, Koman recommends watching ride videos, trying out iconic park recipes at home, and getting excited for trips to come. As in theme parks, life is full of ups, downs, and loop-de-loops. This wild trip will be over soon enough, and Koman will be back to her regularly stuffed programming.

More deliciousness from Internet of Yum:

Pre-order this seriously stylish accessory for your Xbox Series X

The Bose QuietComfort 35 wireless headphones are available for under £200

Pre-order this seriously stylish accessory for your Xbox Series X

The Bose QuietComfort 35 wireless headphones are available for under £200