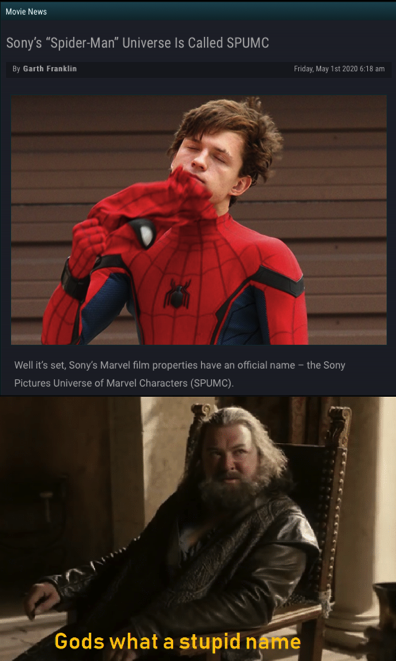 Given that the vast majority of Sony’s Marvel movies play within the realm of Spider-Man and Spider-Man-adjacent heroes and villains, most people have taken to referring to the nascent amalgam of films as, well, the Spider-Verse. You know. Like that movie the studio made. About the Spider-Verse. Sony would like you to stop being so flippant when you refer to its very important cavalcade of Marvel characters! It’s so much more than the Spider-Verse! That’s already a movie! You’re diluting the brand!!!

We can’t be having that. So Sony has, finally, officially tagged its collection of Marvel movies with an easy-to-digest name that will absolutely roll off the tongue and that will become as ready a part of your parlance as the Marvel Cinematic Universe, or the DC Extended Universe, or the Star Wars Expanded Universe. And so, now we have another Universe to add the multiverse: the Sony Pictures Universe of Marvel Characters. Or SPUMC!

Yes, this truly excruciating attempt to remind you that a) these are Sony’s movies, b) they’re #NotAllSpiderMen and c) please, for the love of god, they’re Sony’s but you know the word “Marvel” right you like those Avengers movies please see these too we occasionally have a Robert Downey Jr.! has given us an acronym that sounds like what happens when Peter Parker tries to shoot a web fluid cartridge that’s just run out.

Or when Peter Parker tries to do something a little more personal with some web fluid, frankly. Ooh err.

Anyway, this truly shocking reveal came out of some reporting from IGN, which reached out to Sony after a recent tweet from the Spider-Man: Far From Home Twitter account referred to the Tom Holland, Andrew Garfield, and Tobey Maguire Spidey film series as the “Spider-Man Universe of Characters:”

SMUC only sounds slightly less silly than SPUMC, but after the site confirmed with Sony to see if was the official nomenclature for all these movies, the studio decided now was the time to unleash SPUMC on the unsuspecting world.

Life will never be the same. So yes, please adjust all of your brand warfare tweets appropriately: the Spider-Verse is dead. Long. Live. SPUMC.