The cast of Community returns! But just for a table read on YouTube 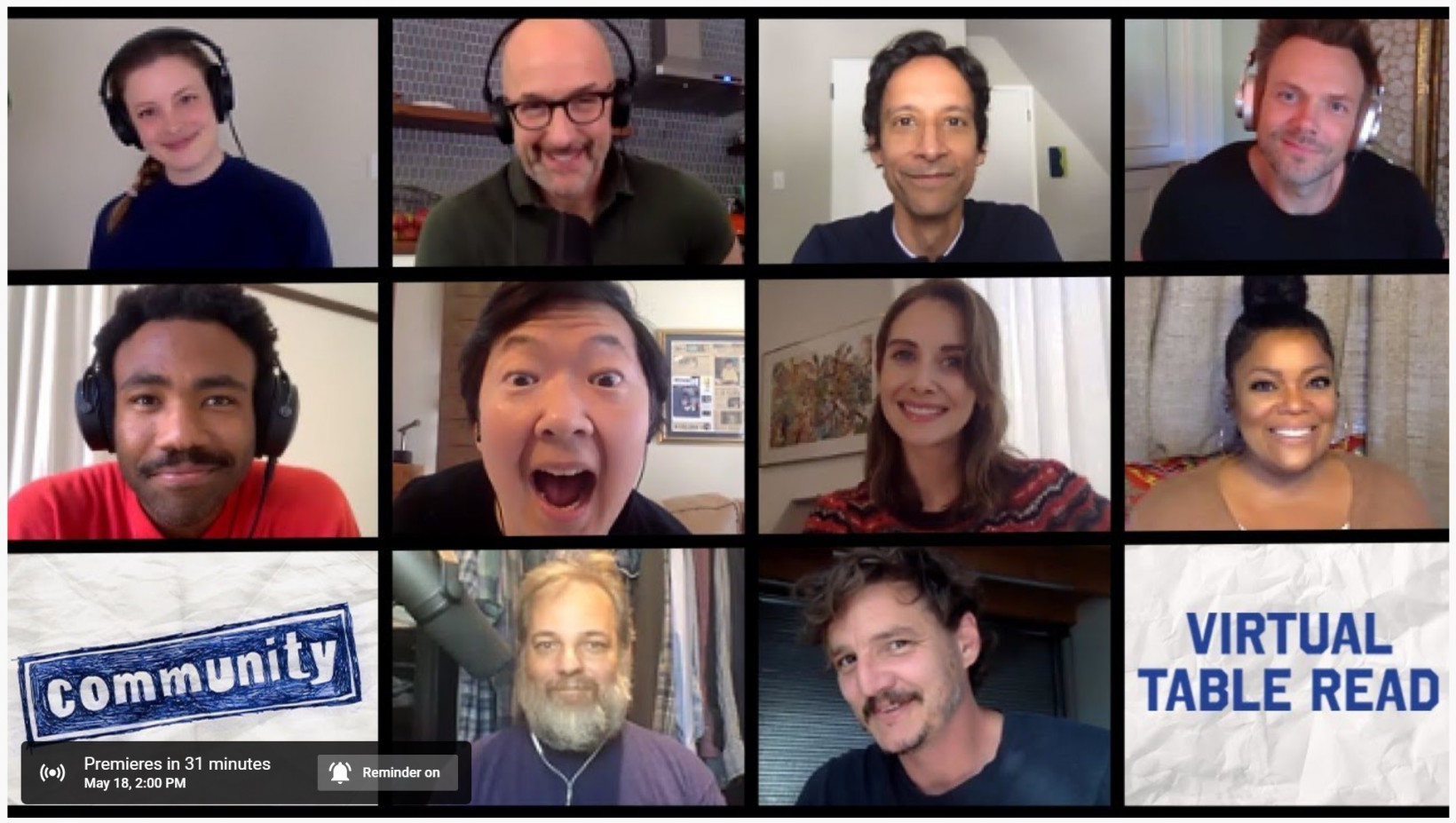 Community fans, it’s time to rejoice! The old gang’s getting back together today – sans Chevy Chase – for a table read on YouTube.

Hot off its resurgence in popularity thanks to finally landing on Netflix, Community is making the leap from the small screen to a bunch of even smaller screens:

The series’ actors, showrunner, and one of the musicians responsible for the show’s theme song recently performed and recorded a live table read of a popular, previously-aired episode and today’s the day it’ll air on YouTube.

Community, for those who haven’t just finished binge-watching it for the umpteenth time (I cannot get enough Troy and Abed), is a show about a misfit group of diverse friends and their wacky, sometimes nonsensical adventures at a whimsical community college ran by one of the greatest characters in the history of television: Jim Rash’s Dean Pelton.

The show is a singular experience that captures the aloofness of Scrubs and the goofiness of My Name is Earl and combines them with a level of gravitas usually reserved for HBO original programming. It is simultaneously a laugh-out-loud and stay up all night pondering what you’ve just seen kind of television show.

And if that doesn’t sell you, the first four seasons of the show also feature Chevy Chase as a hilarious racist homophobe who gets upstaged by Donald Glover‘s expertly-acted loveable dummy of a manchild in a three-season arc that seems even more poignant today than it was when Community was still on the air.

If you want to check out the table read, it starts on YouTube at 2:00 PM PST, which is pretty soon if you’re reading this right after it was posted. Don’t worry if you’re not: as I mentioned previously this isn’t happening live. The table read was pre-recorded, so you won’t have to feel like you’ve missed out if you don’t catch it right as it airs (not to mention that this isn’t a new episode).

The cast will be reading the “Cooperative Polygraph” episode from season five. In this bottle episode Chevy Chase’s character (not featured in the episode) tasks the other members of the group with taking a polygraph test. I won’t spoil anything for those of you haven’t watched, but it’s an absolutely hilarious episode that calls for just the right amount of over-acting. It’s perfect for a table read on YouTube, if you ask me.

For Community fans, this is a chance to see characters such as Troy (Donald Glover) and Shirley (Yvette Nicole Brown), who left the series early, reunite with their old cast mates. This is an opportunity to laugh along with something familiar during a troubling time for everyone.

And, while this might not be the darkest timeline, we could all use a little light and laughter in our lives.

I only wish they’d do more than one episode. They made a fantastic choice with Cooperative Polygraphy, but I’d like to see a late-series episode featuring Jonathan Banks, Paget Brewster, or David Hickey.

It’d also be cool to work in some of the awesome supporting cast of recurring characters Community was lucky enough to have, including John Goodman as an evil annex leader, Darsan Solomon as Dave, and Richard Erdman’s unforgettable turn as Leonard, the cool kid on campus.

But most of all, like any Community fan worth their salt, what I really want is the movie we’ve been patiently waiting for since the series finale in 2015. #SixSeasonsAndAMovie

Click below to watch the table read, starting at 2:00 PM PST: