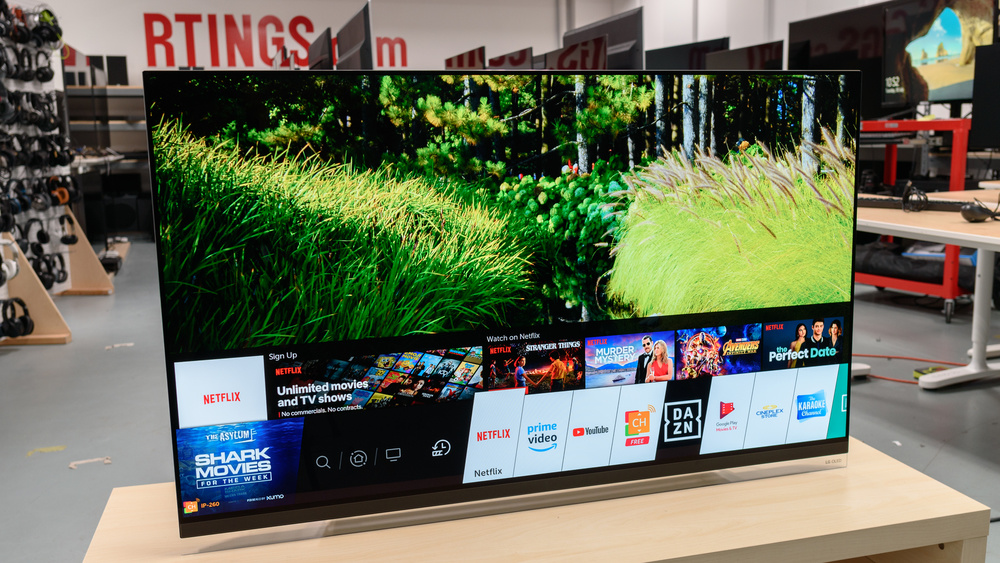 There are plenty of good-looking OLED TVs around these days, and few look better than those put out by LG. The South Korean TV maker has put an immense amount of thought into its premium OLED range, nowhere more so than with the LG E Series OLED – even if it was sadly discontinued this year.

2019’s LG E9 OLED was a masterclass in panel design, offering a glass display that banished the bezel and almost appeared to be floating up from the counter – offering a truly breathtaking visual experience. More than anything else, it looked different from any other TV put out that year.

The E9 didn’t quite make the cut for 2020, though, with the new Gallery Series GX model replacing the E Series line instead. While it presumably made business sense for LG to cut the E Series – which doesn’t seem to have received nearly the amount of media attention as the cheaper (and equivalently specced) C9 OLED, or the more affordable B9 OLED at the bottom of LG’s 2019 OLED range – it’s a loss nonetheless.

We were disappointed not to see an EX model unveiled at CES 2020 along with the other new LG TVs being shown off, and were told simply that the E Series was no longer being pursued.

Neil Robinson, Senior Director for Strategic Projects at LG Electronics, tells us that “The E and G Series were both step-up models, so the GX can be seen as the replacement for the E9.”

Given how close the LG GX and LG WX are in terms of design – both being slim, wall-mounted televisions, with only really a soundbar to differentiate the latter – the removal of an E Series is a move away from variety, even if the GX will be sure to find an audience of its own.

It’s a shame, given the truly unique aesthetic of the E Series compared to other LG TVs. The new BX and CX models look essentially the same as each other, too, like most televisions these days. How much can you iterate on a flatscreen, after all?

Why we loved the E Series OLED

Certainly, there are plenty of subtle differences between the physical appearances of TVs, whether that’s where the TV brand’s logo sits, what kinds of feet or stands prop it up off a counter, or the thickness and quality of the display’s casing. That’s not to mention the differences in picture quality – which is really the heart of any television experience.

But that’s why the E Series felt so refreshing: offering a unique form factor amid a ceaseless catalogue of identikit rectangles. Most of LG’s OLED range shares the same panel and processor, anyway, so differences in design feel even more important.

In our LG E9 OLED review last year, we praised the set’s “all-glass, frameless panel” for its “open and expansive air”, as well as “a dazzling picture, with crisp detail and truly cinematic visuals”. Aside from minor irritations – the lack of HDR10+, and a patchy Bluetooth connection – the E9 was and is a knockout television to watch.

The year before? We called the E8 OLED “arguably the ultimate expression of these OLED advances, thanks to its glamorous design, niftily integrated sound system and, best of all, mesmerizingly good pictures.”

Other LG TVs have similarly intriguing design choices – including the TV stand for the C9 OLED, which is slanted to funnel audio towards the viewer – but it’s frustrating to see successful examples of this not pursued further, limited to just one or two model generations.

So where did the E Series go?

Our senior home entertainment editor, Nick Pino, speculates that “the reason not to make one this year isn’t based on any pre-existing issues [with the E Series design], but rather that LG decided it couldn’t innovate enough to warrant a new model.”

It’s possible that LG backed itself into a corner with the glass panel design. The TV market demands iteration, and the unique design constraints of a glass display may have meant there was less room to alter or improve its shape going forward compared to other designs (the GX really feels like an iteration on the W Series, rather than a standalone model).

OLED panels are also infamous for often getting damaged during production – given their sensitive, organic materials – and we can’t imagine an all-glass display offsetting worries about breakages either.

The LG E9 OLED is still on sale for those wanting something different – costing roughly half what it did at launch this time last year – and we recommend you take a look if you aren’t sold on the new Gallery Series GX OLED, which offers the only notable divergence from LG’s existing models. Processing enhancements are likely to be minimal compared to the 2020 range too.

But for those of us wanting something different from our televisions, it looks like we’ll have to look elsewhere – whether that’s Samsung’s zero-bezel Q950TS QLED, the rotating Samsung Sero TV, or Hisense’s wacky projector-TV hybrids – to do so.

Solar. Welcome to fleather jacket store that offers a timeless genuine leather jacket style that never goes out of fashion. Adding milk instead of water is another excellent way of enhancing the taste of your protein shake.