The HP summer sale is now live – save up to $329 on a cheap laptop, desktop or printer 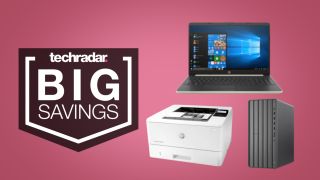 The HP Summer Sale is here today – meaning if you’ve been looking for a cheap laptop deal, a printer, or a slick new desktop, then you’re in luck as you can save yourself up to $329 right now.

There’s a whole range of discounts on display today in the HP summer sale running all the way through to June 20th, including price cuts on some great cheap laptops for casual use all the way up to specced out workstations. We’ve included what we think are the best deals just down below, as well as a good selection of desktops and printers.

Highlights include this superb HP 15T laptop for just $559.99 (was $789) – a total saving of $239 on a really superb cheap ultrabook. Inside you’re getting an Intel Core i5 processor, 256GB SSD, and a whopping 12GB of RAM – perfect specs for a solid working from home machine.

These are fantastic deals but they’re not all that’s on offer in the HP Summer sale today – simply scroll down to see what we think are the best ones right now.

HP Laptop 15t | 15.6-inch laptop | $559.99 at HP
Looking for a cheap working from home machine? This 15T is a no thrills, solid choice that packs in a lot of power for the price. With a 10th Gen Intel Core i5 processor, 12GB of RAM and a 256GB SSD, you’re getting some really speedy components here for under $200 of what you’d normally pay.
View Deal

HP Pavillion 15t | 15.6-inch laptop | $799.99 at HP
This Pavillion is offering eye-wateringly high-end specs for a mid-tier budget range, thanks to the $300 summer sale price cut. Not only are you getting a 10th Gen Intel Core i7 processor, but 16GB of RAM, a 512GB SSD, and even 32 GB of Intel Optane memory. If you’re looking for an absurdly powerful ultrabook, this is fantastic value right now.
View Deal

HP Spectre x360 | 13-inch laptop | $999.99 at HP
This slick, convertible 13-inch Spectre is a perfect choice if you want to balance power, style, and function. Its glass touch screen is equally at home as a laptop or tablet, while under the hood you’re getting an 8th Gen Intel Core i5 processor, 8GB of RAM, and a 256GB SSD – specs that will challenge any MacBook at this price point.
View Deal

HP Spectre Folio | 13-inch laptop | $1,199.99 at HP
Bound completely in genuine leather, these HP Spectre Folio convertible laptops are aimed at the professional crowd, though they’re versatile enough to fit in anywhere. With an 8th Gen Intel Core i7, 8GB of RAM, and a 256GB SSD, there’s not much these stylish convertible laptops can’t do.
View Deal

HP Envy desktop | $549.99 at HP
You can’t go wrong with these incredibly solid HP Envy desktops, now even better value thanks to a $100 price cut. Inside you’re getting an Intel Core i5 9400, 8GB of RAM, and a 1TB HDD with the standard setup although you can customise before you buy to add a cheap SSD or even a graphics card.
View Deal

HP Omen 30L gaming desktop | $1,099.99 at HP
The Omen line carries a fine gaming heritage, and this latest 30L desktop is no exception to the rule. It’s packed exclusively with the latest AMD components – a Ryzen 5 processor, 8GB of RAM, a 256GB SSD and an 8GB Radeon RX 5700XT graphics card.
View Deal

HP Smart Tank Plus 651 printer | $349.99 at HP
There’s $100 off on this HP Smart Tank 651 – the perfect economical printer for home use. It’s got easy WiFi pairing, copying, scanning and fax capabilities, and the included standard ink cartridges aim to deliver up to two years of printing.
View Deal

HP Sprocket 2nd generation printer | $89.99 at HP
These tiny Sprocket printers can turn any smartphone or camera into an old Polaroid camera by pairing directly to the device via Bluetooth. They’re a pretty cool little gadget, and really easy to travel with since they’re only the size of a smartphone themselves.
View Deal

If you’d like to shop around more then we recommend our best laptop deals page. Here you’ll find all the top brands including Dell, Acer, Asus to name a few, as well as our well-researched list of the best cheap laptops. If you’d like to consider Apple, then our best MacBook deals page is the perfect resource for getting a cheap price on one of these premium Apple laptops.