The Hunt Is On for Elusive Ghost Particles in Antarctica 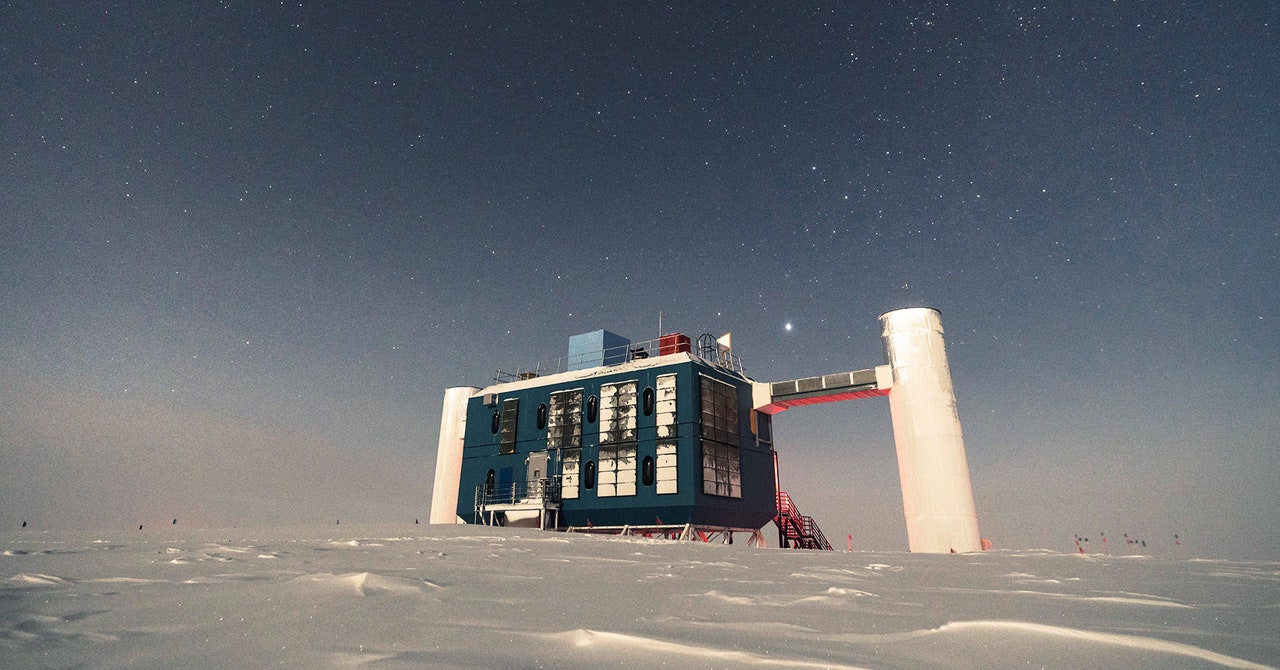 Unlike light and other forms of radiation produced by these galaxies, a neutrino doesn’t lose its energy as it travels through space, since it doesn’t interact with other matter. This makes neutrinos extremely difficult to detect, but it also makes them the best way to study exotic celestial objects like quasars and blazars that are billions of light years away. When a neutrino is produced, it keeps traveling in a straight line at the speed of light for eons. This means a cosmic neutrino detected on Earth is almost exactly the same as it was when it was spit out by the core of a galaxy on the other side of the universe.

“Neutrinos are a blessing and a curse,” says Cosmin Deaconu, a physicist at the University of Chicago and member of the Anita team. “They’re great for directly probing astrophysical sources because they travel cosmological distances without getting corrupted, but you need very large detectors to have a chance of seeing any.”

If you’re a neutrino hunter, the type of detector you want to use will depend on whether you’re looking for low-energy neutrinos or high-energy neutrinos. In both cases, the methods for detecting the neutrinos are similar; they mostly differ in their environments and scale. Since neutrinos hardly ever interact with matter, it’s effectively impossible to detect the particle directly. Instead, physicists look for the secondary effects of neutrinos interacting with a medium like water. When the rare neutrino interacts with the nuclei of hydrogen or oxygen, it creates a flash of light or radio waves that can be detected by nearby sensors.

Since these interactions seldom happen, physicists need a big detector—unless they want to spend decades waiting around to see one. The largest low-energy neutrino experiment in the world is the Super-Kamiokande observatory located nearly a mile underground in an old Japanese mine. Here it is shielded from the relatively high-energy neutrinos created when cosmic rays strike the Earth’s atmosphere, which would make it hard to study the low-energy neutrinos streaming from the sun and collapsing stars, called supernovae, in our galaxy. The experiment consists of a spherical steel tank that is 130 feet in diameter and filled with 50,000 tons of the purest water on Earth. The entire inside surface of the tank is coated with around 13,000 sensors that are on the lookout for rare bursts of blue light that indicate a neutrino is interacting with the water.

The Super-Kamiokande observatory is huge, but it is dwarfed by the size of detectors needed to find high-energy neutrinos that traveled here from other galaxies. The general rule of thumb is that for every order of magnitude increase in neutrino energy, the number of the particles that arrive on Earth decreases by a factor of 100, says Amy Connolly, a physicist at Ohio State University who has been a member of the Anita team since the beginning. That means that the highest-energy cosmic neutrinos are around a billion times more rare than the solar neutrinos studied at the Super-Kamiokande observatory. “We expect something like 10 cosmic neutrinos per square kilometer per decade hit Earth,” Connolly says.

It would be prohibitively expensive to build a neutrino detector like the Super-Kamiokande that is large enough to detect cosmic neutrinos on human timescales. But Earth comes readymade with some giant neutrino traps of its own—we call them lakes, oceans, and glaciers.

Tapping Earth’s water reservoirs to study cosmic neutrinos isn’t a new idea. In the mid-1970s, physicists launched the first attempt at a submarine cosmic neutrino detector: the Deep Underwater Muon And Neutrino Detector Project, or Dumand. The project was meant to consist of thousands of small spherical sensors strung like pearls along lines tethered to the seafloor near Hawaii. Although a rash of studies and a prototype string deployed from a ship showed the concept was viable, the program was plagued by technical difficulties. By the time the US Department of Energy pulled the plug on the project in 1995, only a single, faulty sensor string had been installed in the ocean.