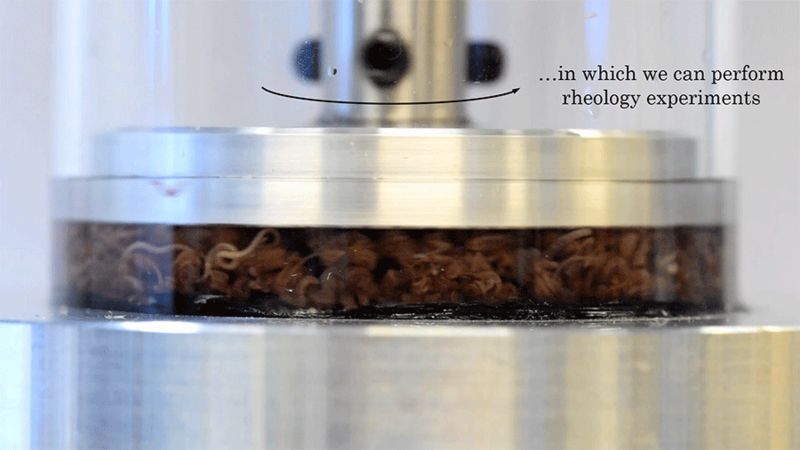 You wake up, slightly intoxicated as tap water rinses over your body. You don’t remember why you’re here, but you’re joined by hundreds of fellow sludge worms, wriggling slowly. You start to remember: The temperature changed. The water filled with alcohol. And then the spinning begins again.

While this experiment may sound odd, the scientists behind it had a worthy objective. They wanted to better understand active polymers, a class of systems that are common in biology. The physicists propose that sludge worms, formally called Tubifex tubifex, could serve as an easily accessible new platform to study active polymers and could represent the start of a whole new field of research into “living polymers.”

“Active polymers are a class of active systems that are of considerable interest due to their prevalence in biological systems on multiple length scales,” Antoine Deblais, the study’s first author from the University of Amsterdam in the Netherlands, told Gizmodo. “On the nano- and micro-scale, biology provides many examples of active flexible structures, ranging from actin filaments and microtubules (the main constituents of the cytoskeleton in living cells) to flagella in sperm, algae, bacteria, and a diversity of other planktonic microorganisms. Using this original system could help in a better understanding of active filaments in general.”

There aren’t a lot of experimental systems available to study these sorts of active polymers, Deblais explained, especially when it comes to physical properties, like how they flow. So, this experiment treats the worms in water as a kind of active polymer, a system composed of individual entities that can move on their own in the way that, say, a beaker full of strings cannot. Plus, these worms are cheap and easy to purchase at a pet store.

The team performed experiments on the mass of worms held in a rheometer, essentially a system of spinning plates that generates different flow patterns through a liquid. They filled a beaker with the sludge worms and tested how they flowed under various conditions, such as lowering the temperature or feeding the worms 5 percent alcohol, both of which decrease the worms’ activity.

When the worms stopped wriggling under the effect of alcohol or cold, the flowing liquid underwent something called shear thinning, where increased spinning orients the strands (in this case, worms) in the same direction and allows the fluid to flow more easily. But when the researchers rinsed the worms off, the shear thinning behavior slowed as the worms took on more random orientations.

Deblais and his collaborators published their work in the prestigious journal Physical Review Letters.

Next, the physicists plan to recreate previous experiments on regular polymer chains and see what happens when the random worm-wriggling behavior is added.