Updates From Westworld, Avatar 2, and More 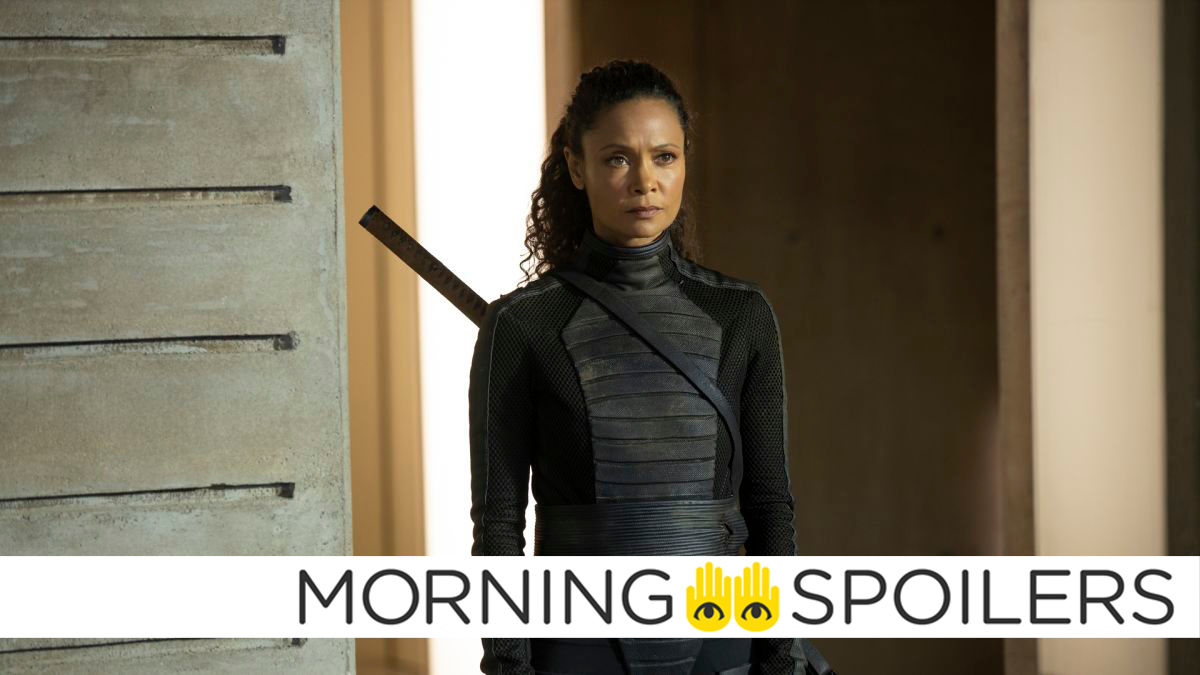 Emily Blunt and Dwayne Johnson could team up again for a new comic book adaptation. Neve Campbell says she’s been broached about the fifth Scream film. Phil Lord offers a tiny tease of the work on Into the Spider-Verse 2. Joel McHale talks his Stargirl filming experience. Plus, another Sword and Shield fave is coming to the Pokémon anime, and…pool noodles? Spoilers, away!

According to Deadline, Dwayne Johnson and Emily Blunt are attached to star in a film adaptation of Scott Lobdell’s comic book series Ball and Chain from The Big Sick writer, Emily Gordon. The story concerns a married couple who are on the brink of divorce until “a mysterious meteor bathes the couple in extraterrestrial energies, giving them super-powers that only work when they’re together.”

Paramount has acquired 2084, a spec script from Mattson Tomlin (The Batman) described as “a spiritual sister to George Orwell’s 1984.” Lorenzo di Bonaventura is attached to produce. [THR]

In a recent interview with Youtube’s Jake Hamilton, Neve Campbell confirmed she’s discussed returning for the fifth Scream movie with Ready Or Not directors Matt Bettinelli-Olpin and Tyler Gillett.

They’ve come to me and we’re having conversations. It’s a little hard at the moment because of COVID to know when that’ll happen and hopefully we can see eye to eye on all the elements that have to come into place for it to happen. I originally had been really apprehensive about doing another Scream without Wes because he was such a genius and he is the reason they are what they are but the directors have come to me with such a great appreciation for Wes’s work and they really want to honor it and that meant a lot to me. Hopefully we’ll be able to do it.

Children of the Corn

THR reports Equilibrium director Kurt Wimmer is currently filming a remake of Stephen King’s Children of the Corn “on the outskirts of Sydney, Australia.”

Spider-Man: Into the Spider-Verse 2

Phil Lord provided an update on the Spider-Verse sequel.

Dark Days at the Magna Carta

THR reports Netflix has acquired Dark Days at the Magna Carta, a post-apocalyptic thriller starring Blake Lively described as “a character driven thriller set against a catastrophic event and centers on a woman going to extreme lengths to survive and save her family.”

In the latest production pictures of the long-awaited sequel: pool noodles!

In a new interview with Variety, Westworld co-creator Jonathan Nolan denied rumors he and Lisa Joy have just three seasons left of their plans for the show.

Well, I just want to clarify, you know, Lisa and I have never actually talked about a number of seasons. James Marsden mentioned five [seasons] in the first season when we were on hiatus, and more recently there’s been reporting about deals and other stuff like that. But we’ve never actually talked out loud about how many seasons we imagine this thing going, because I think you’d be foolish to. Things change, circumstances change. I think when we sat down to do the show, we didn’t quite realize how difficult it would be to make this show — [laughing] how many years it would take per season. So we’ve never actually talked about how many seasons that plan was, and indeed I think when we had the plan it didn’t actually map out to a specific number of seasons, exactly. It was a beginning, a middle and an end.

When you have a show going like this, you want to stay as long as you’re telling a compelling story. We’re heading towards that end, but we haven’t completely mapped it out. At this point, part of the work is looking at the rest of the story we have to tell. It’s two impulses, one against the other. You don’t want to walk away from people who are as talented and cool as this. They’re all lovely, lovely people, and they love working together, we like working together. At the same time, you don’t want to outstay your welcome. You have a story to tell, and you want to go out without feeling like you’ve outstayed your welcome. So we’re trying to balance those things a bit.

All my scenes are with Luke Wilson. He’s such a nice man and he’s such a good actor that I always still find myself in situations where I say, ‘You get to be a superhero. You get to work with Luke Wilson.’ So I hope to God I get to do more of it. I hope the series does well, all that stuff. Every actor probably says, ‘It was great working with all these people,’ and you’re like, ‘Yeah, yeah, yeah.’ It really was. I do a table read with everybody and I had met Amy Smart before and she’s really nice and cool. So I kind of did one meeting, but then everything else was with Luke, but all really cool people. So I would kill to do it again.

Finally, the CW has released a new teaser for the seventh season of The 100.

© 2023 medi furbaby. Sankt. Login & select from 100+ ready to use templates or create ebook from scratch.