Weed Sales on the Dark Web Surged Early in the Pandemic 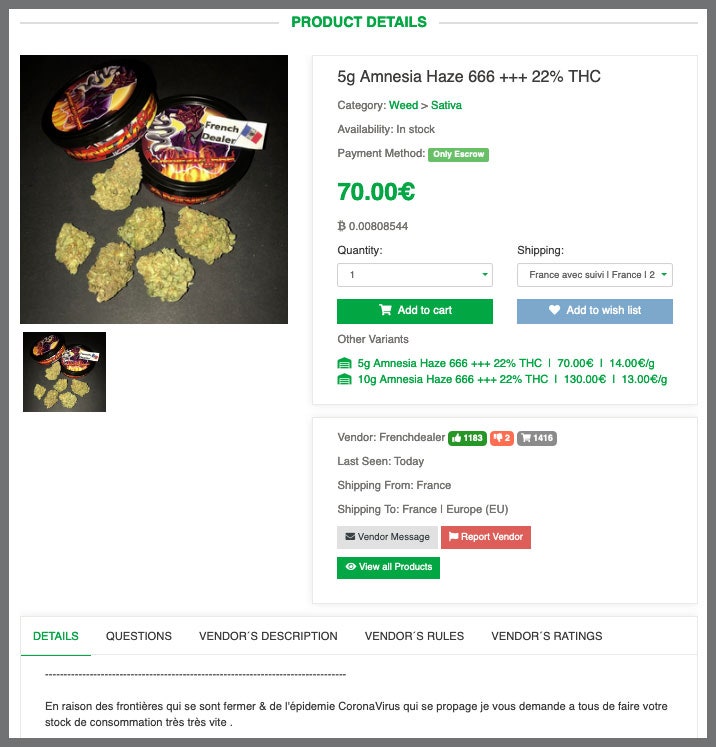 From toilet paper to tomato sauce, Covid-19 has turned normal consumers into high-volume doomsday binge shoppers. So perhaps it’s no surprise that as they filled their pantries and supply closets in the early days of the pandemic, online buyers also stocked up on dark web weed.

In an analysis published in the current issue of the Journal of Addiction Medicine, the European Monitoring Center for Drugs and Drug Addiction found that retail marijuana sales on some dark-net markets spiked significantly in the first months of the pandemic. The study, whose findings from three dark web drug markets popular among Europeans were first published online last month, shows that buyers sharply ramped up their marijuana orders during the first three months of the year. In March, the mostly Europe-based buyers made 14,289 pot purchases on the markets Cannazon, Versus, and Agartha, compared with just 11,036 in January, a 30 percent increase.

The EMCDDA’s principal scientific analyst, Teodora Groshkova, suggests that, while it’s difficult to know the exact reason for that sales bump, the social distancing lockdowns that spread across Europe and later the US to fight the novel coronavirus in February and March might explain the sudden growth in digital demand for contraband cannabis. “It’s possible that buyers were trying to stock up for the weeks to come, or there’s just a larger group of cannabis users discovering online as a convenient distribution channel when social contact is limited and they have limited means to reach out to their usual dealer,” Groshkova says.

Despite the growth in the number of online marijuana sales that the EMCDDA counted, the group notes that overall revenue from those sales appears to have dropped during the same period. That’s because while small-quantity retail sales of marijuana increased, the large-quantity wholesale buys that make up a large fraction of the dark web drug business diminished. On the cannabis-only market Cannazon, which accounted for the majority of sales measured in the study and was the only market where the researchers were able to glean price data, sales fell from around $2.1 million in January to $1.7 million in March. And while 10-gram sales of marijuana, for instance, increased 46 percent from 1,725 in January to 2,521 in March, kilogram sales of marijuana dropped 36 percent from 5,702 in January to 3,652 in March.

Groshkova argues all of that can be explained by pointing to how a pandemic economy changes drug dealing: With no physical contact, retail sales are moving online. But some offline drug dealers who source their drugs from the dark web have stopped refilling their supplies, since they can’t make contact with buyers to sell their wares. “When the offline opportunities for resale is limited, these people are not so interested to get hold of this type of larger amount,” Groshkova says. “They see that they’re going to have difficulty shifting these products.”