What Goes On in a Proton? Quark Math Still Needs Answers 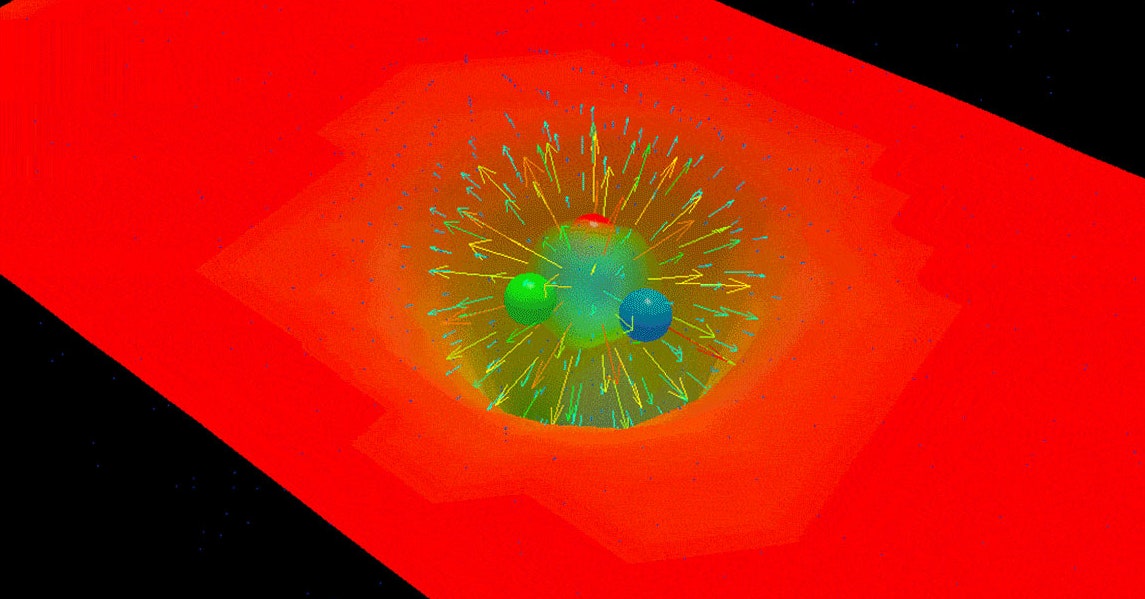 Objects are made of atoms, and atoms are likewise the sum of their parts—electrons, protons, and neutrons. Dive into one of those protons or neutrons, however, and things get weird. Three particles called quarks ricochet back and forth at nearly the speed of light, snapped back by interconnected strings of particles called gluons. Bizarrely, the proton’s mass must somehow arise from the energy of the stretchy gluon strings, since quarks weigh very little and gluons nothing at all.

Physicists uncovered this odd quark-gluon picture in the 1960s and matched it to an equation in the ’70s, creating the theory of quantum chromodynamics (QCD). The problem is that, while the theory seems accurate, it is extraordinarily complicated mathematically. Faced with a task like calculating how three wispy quarks produce the hulking proton, QCD simply fails to produce a meaningful answer.

“It’s tantalizing and frustrating,” said Mark Lancaster, a particle physicist based at the University of Manchester in the United Kingdom. “We know absolutely that quarks and gluons interact with each other, but we can’t calculate” the result.

A million-dollar math prize awaits anyone who can solve the type of equation used in QCD to show how massive entities like protons form. Lacking such a solution, particle physicists have developed arduous workarounds that deliver approximate answers. Some infer quark activity experimentally at particle colliders, while others harness the world’s most powerful supercomputers. But these approximation techniques have recently come into conflict, leaving physicists unsure exactly what their theory predicts and thus less able to interpret signs of new, unpredicted particles or effects.

A humble electron, for instance, can briefly emit and then absorb a photon. During that photon’s short life, it can split into a pair of matter-antimatter particles, each of which can engage in further acrobatics, ad infinitum. As long as each individual event ends quickly, quantum mechanics allows the combined flurry of “virtual” activity to continue indefinitely.

In the 1940s, after considerable struggle, physicists developed mathematical rules that could accommodate this bizarre feature of nature. Studying an electron involved breaking down its virtual entourage into a series of possible events, each corresponding to a squiggly drawing known as a Feynman diagram and a matching equation. A perfect analysis of the electron would require an infinite string of diagrams—and a calculation with infinitely many steps—but fortunately for the physicists, the more byzantine sketches of rarer events ended up being relatively inconsequential. Truncating the series gives good-enough answers.

The discovery of quarks in the 1960s broke everything. By pelting protons with electrons, researchers uncovered the proton’s internal parts, bound by a novel force. Physicists raced to find a description that could handle these new building blocks, and they managed to wrap all the details of quarks and the “strong force” that binds them into a compact equation in 1973. But their theory of the strong force, quantum chromodynamics, didn’t behave in the usual way, and neither did the particles.

Feynman diagrams treat particles as if they interact by approaching each other from a distance, like billiard balls. But quarks don’t act like this. The Feynman diagram representing three quarks coming together from a distance and binding to one another to form a proton is a mere “cartoon,” according to Flip Tanedo, a particle physicist at the University of California, Riverside, because quarks are bound so strongly that they have no separate existence. The strength of their connection also means that the infinite series of terms corresponding to the Feynman diagrams grows in an unruly fashion, rather than fading away quickly enough to permit an easy approximation. Feynman diagrams are simply the wrong tool.

The strong force is weird for two main reasons. First, whereas the electromagnetic force involves just one variety of charge (electric charge), the strong force involves three: “color” charges nicknamed red, green and blue. Weirder still, the carrier of the strong force, dubbed the gluon, itself bears color charge. So while the (electrically neutral) photons that comprise electromagnetic fields don’t interact with each other, collections of colorful gluons draw together into strings. “That really drives the differences we see,” Lancaster said. The ability of gluons to trip over themselves, together with the three charges, makes the strong force strong—so strong that quarks can’t escape each other’s company.