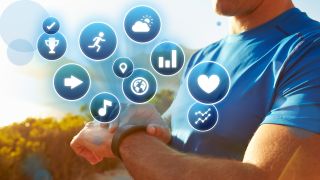 The fitness tracker strapped around your wrist can tell you a great deal about your wellbeing – but can it also tell you anything about the coronavirus pandemic?

On a personal level, the answer is probably not – but when your data is combined with readings from thousands of other users, it could be invaluable.

For example, many modern fitness trackers and smartwatches (including the Fitbit Charge 4, Garmin Forerunner 945 and Apple Watch Series 5 to name just a few, feature pulse oximetry (also known as SP02) sensors, which give you an idea of your blood oxygen saturation and how it changes in different situations.

Low blood oxygen can be a symptom of coronavirus, but alone it’s not enough to make a diagnosis – particularly when it’s measured using a wrist watch, for several reasons.

For starters, they just aren’t accurate enough. Garmin is particularly up front about this, stating plainly that: “Pulse Ox data is intended for recreational use only. Pulse Ox data should not be treated as any type of medical diagnosis or treatment of disease. This is not a medical device.” Similarly, Fitbit’s app makes it clear that SP02 measurements from fitness trackers are only estimates.

So why aren’t they as accurate as medical devices? Part of the reason is placement. The type of pulse oximeter used in a hospital clips onto your finger, toe or ear, where the blood flow is close to the surface. Light is emitted on one side of the oximeter, and passes right through to a sensor on the other side.

A fitness tracker around your wrist has both the light source and sensor on one side of your wrist, and must therefore rely on light that bounces back. The blood vessels in your wrist are also further from the surface of your skin, further muddying the waters.

There’s also the matter of knowledge. Even if you splashed out on a medical-grade pulse oximeter (and shopping trends on Amazon suggest many people have), blood oxygen saturation is only part of the picture, and can’t be used for diagnosis alone. Imagine how much easier large-scale testing would be if it only involved briefly clipping a device onto your fingertip for half an hour.

And if you’ve never used an oximeter before, you might simply read it wrongly, or misinterpret the results.

However, that’s not to say your fitness tracker is useless in the fight against Covid-19 – far from it. Fitness trackers can’t tell you whether you personally are sick, but they have great potential on a population level, and not just SP02 measurements.

Data gathered in large amounts can show trends like reduced overall movement (indicating people aren’t feeling up to working out), increased or disturbed sleep, or increased heart rate (which can be indicative of fever as the body fights off an infection).

Polar has just announced that data from its fitness trackers is being used in a new Covid-19 ‘early warning’ project. The work is being carried out by science and research firm Elysian Labs, and was commissioned by the US Army.

The study aims to help identify people who may be incubating the virus and infecting others, but not yet showing symptoms themselves.

It’s a particularly big problem for first responders, and identifying changes in key markers (such as heart rate, heart rate variability and sleep patterns) in people who later become symptomatic could help identify infected people and remove them from front-line work faster.

Polar is particularly experienced when it comes to collecting and pooling the resulting data for research. It’s been working with researchers (including those at Elysian) for decades, and has a lot of experience producing accurate, reliable and clean data that’s suitable for serious studies.

“When you’re making recommendations to the US Army and you’re tasked with that, there’s a huge amount of trust,” Tom Fowler, president of Polar USA, told TechRadar. “Whether you actually trust the data on which your study relies. For over 40 years, Polar has been well known for its accuracy, reliability and stability.

“[Elysian] had already pre-selected Polar based on their own experience, and that’s just one lab. We also do a tremendous amount of work with the US Marshals Service. Again, it’s the same story – to optimize the effectiveness. That’s separate and pre-dates C-19, but those ar  just two examples I the world of military, government and special forces. Over and over again because of that reliability, accuracy and stability, Polar continues to be the go-to choice.”

The initial validation study includes 50 US National Guard personnel, with intentions to expand the study to 5,000 individuals in the coming months, but Polar is also working with researchers at non-profit organization PhysioQ on a project called Neo that you can take part in at home.

“It’s a free app that will be available to anyone who wants to download it into their smartphone that will harvest data from the Polar Flow app to gauge if they are trending adversely around the key biometrics that might be indicative that something is amiss with you,” said Fowler. “Whether that’s not executing good sleep hygiene habits or the early onset of disease.”

Polar isn’t the only fitness tracking company involved in coronavirus research; many others are collaborating with the Scripps Research Institute in San Diego and Stanford Medicine to see how data gathered from fitness trackers could predict the spread of viral diseases including Covid-19.

Their joint project is called DETECT – a health study that analyzes data from fitness trackers, including heart rate, sleep and activity levels, which aims to detect the emergence and spread of viruses. If you’re over 18, live in the US and own a Fitbit, Apple Watch, Amazfit or Garmin device, you can pitch in and contribute your data by downloading the MyDataHelps app.

“From our previously published work, we know that data collected from consumer wearables can significantly improve the prediction of influenza-like illness,” said Dr Eric Topol, director and founder of Scripps Research Translational Institute, in a statement issued at the project’s launch.

Dr Topol referred to a study published in medical journal The Lancet, which aimed to see whether population trends of seasonal respiratory infections (such as flu) could be identified using heart rate and sleep data from fitness trackers.

Researchers used anonymized data from 47,249 Fitbit users in the US, and found that the data (specifically increased sleep duration and elevated heart rate) significantly improved prediction of influenza-like illnesses at the state level.

Yet another study, Covidentity, is using data from mobile and wearable devices including Garmin smartwatches. Garmin owners are encouraged to link their devices to the study, which is underway at Duke University, so researchers can see how their heart rate and activity levels are affected by Covid-19.

The aim is not only to track the disease’s spread, but to understand if someone might be more susceptible to contracting it, or might be at risk of a worse outcome.

All of these projects are still in relatively early stages and there are limitations to using data from fitness trackers and smartwatches. Although they’re becoming more affordable, there’s no avoiding they’re luxury items, and people who own them are likely to be more affluent on average than those who don’t – not to mention younger, more physically active, and more able to work from home.

However, there’s great potential here – even after the current crisis is under control. Scripps Research says that eventually it hopes to develop more individualized approaches to health care, which compare your current vital signs to your personal average – establishing patterns and letting you investigate changing trends with a level head.

“There is no silver bullet,” adds Tom Fowler. “Definitely telling an individual ‘Clearly, because your biometrics are trending in this direction you’re sick,’ that’s not happening. There’s a misunderstanding out there that wearables can detect C-19 – that’s baloney. It’s like asking if I can take a pill and lose weight, or rub a cream on my body and take 20 years off my physical appearance.

“One good day in your biometric portfolio doesn’t mean you’re a superwoman – nor does one bad day mean you’re one step from the grave. It’s the trend that matters. That [change] is only illustrating that something is going on – something is causing you to decline or to be robust.”

A downward trend in your wellbeing stats could be due to any number of things, and it’s up to you to consider what it might be. For example, if you’ve been having a lot of late nights, eating poorly and propping yourself up with caffeine, restless sleep and other issues would be easily explained and you can address the problem by changing your lifestyle.

If, however, you’ve been eating well and looking after yourself, it might be worth considering other possibilities, which could include illness. If you’ve been in contact with someone who’s been diagnosed, it may be wise to get tested and isolate yourself until you have a proper answer.

That empowerment is something that’ll extend well beyond the current crisis. “If there’s one silver lining, its increasing peoples awareness to the fact that they can gain this insight,” says Fowler. “Their lifestyle choices matter, they can live a better more vibrant life through the data they have had access to all along.”