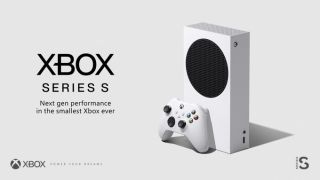 Xbox Series S pre-orders are on their way, and it’s now just a matter of hours before the cheap Xbox hits the shelves for the first wave of early buyers. That means it’s time to prepare for the big day, and with Xbox Series X pre-orders coming in significantly more expensive, there’s going to be some competition out there. The Xbox Series S specs and price were announced earlier this month, and Microsoft seems to have nailed the delicate balance between the two to offer a cheap new Xbox if you don’t care about having a disc drive.

This disc-less, next-gen Xbox Series S specs are, however, substantially more powerful than the (now discontinued) Xbox One S All-Digital console, and the CPU, GPU and solid state disc drive storage only trail what you’ll get from the Series X.

We’re rounding up everything you need to know about Xbox Series S pre-orders right here, as well as going into more detail on exactly what you get for your cash in terms of Xbox One S specs, features, and the release date just below.

We’re not likely to see the same scramble offered up by PS5 pre-orders last week, but there’s no telling how much stock retailers will hold for these first few days. Microsoft has announced which retailers will be offering up Xbox Series S pre-orders this week, so you’ll want to sign up for notifications where you can. We’re showing you exactly where to head first here – balancing likely stock amounts, potential incentives, and the competition you’ll be facing at each store.

Xbox Series S pre-orders in the US

Microsoft
Xbox Series S pre-orders will go live at Microsoft at the same time as the main console, so head over to Microsoft direct for your first shot at picking up the cheaper console this week.
View Deal

Best Buy
Best Buy is currently offering email notifications for Xbox Series S pre-orders, helpful if you’re looking for instant information as soon as those doors open. Best Buy saw an enormous amount of interest when it came to PS5, so this is likely to be a competitive store come September 22.
View Deal

Amazon
As a massive retail giant, Amazon is likely to have plenty of Xbox Series S pre-orders already on the books. That means there will be more consoles up for grabs here, but be warned you’re going up against a large number of fellow shoppers as well. Amazon doesn’t currently have a dedicated page for the Xbox Series S, but we’ll be updating as soon as one appears.
View Deal

Newegg
Newegg was listed by Microsoft has having Xbox Series S pre-orders already on the books, though we’re not seeing a dedicated page yet. Stay tuned, because Newegg might be one to go to in the rush of competition.
View Deal

GameStop
GameStop will no doubt be offering its fair share of Xbox Series S pre-order slots as a gaming-focused retailer. You might also have a better chance at securing yourself an extra incentive as well. You can get your name down to be the first to know when those order books open on September 22.
View Deal

Walmart
Walmart is a massive retailer, but they’re not so gaming focused as to draw hordes of expectant pre-orderers come September 22nd. You can sign up for notifications here as well.
View Deal

Microsoft
Xbox Series S pre-orders will be available from Microsoft’s UK store this week as well, so you’ll want to be ready at 8am BST tomorrow to get one of the first shipments from Microsoft direct.
View Deal

Amazon
Xbox Series S pre-orders will also be available at Amazon, and as one of the most popular retailers in the country there will not only be a good amount of units available, but also plenty of fellow shoppers trying to pick one up. That means there will be high competition here.
View Deal

Currys
Currys is currently offering a sign up notification service so you can find out when Xbox Series S pre-orders go live at this particular retailer as soon as they hit the shelves. Keep checking back tomorrow, though, as we’ll be bringing you all the latest stock updates as well.
View Deal

John Lewis
John Lewis has also been named by Microsoft as a retailer carrying Xbox Series S pre-orders this week. That means you might also be able to take advantage of the excellent electrical warranties this particular shop offers.
View Deal

Very
If you’re heading to Very on September 22, you’ll want to be one of the first there. Register your interest in Xbox Series S pre-orders here to get an email notification as soon as the order sheet is posted.
View Deal

AO
AO are also offering Xbox Series S pre-orders this week, and again there’s no landing page as of yet. It’s likely to expect a single product page here, so we’ll stay in touch when things start to shift on September 22.
View Deal